Warren Buffett's favorite holding period is forever. Two decades may not be forever, but it certainly requires a long-term focus.

Investing maven Warren Buffett famously quipped that his favorite holding period is forever. There's a lot to be said for thinking in those terms, not just because it's the strategy the world's most successful living investor follows. For one thing, focusing on the ultra-long term forces you to focus on the quality and staying power of the businesses you're buying when you purchase their shares. For another, holding onto the companies you own allows you to build wealth very tax-efficiently, as capital gains taxes are rarely due unless and until you sell. And of course, a long-term focus gives you patience when the market is moving against you.

Knowing the benefits a long-term focus can have for investors, we asked three contributors to each pick a company whose shares they believe would be worth holding onto for the next 20 years. They selected Take-Two Interactive (TTWO -4.74%), Berkshire Hathaway (BRK.A -1.14%) (BRK.B -1.07%), and Kinder Morgan (KMI -0.92%). Read on to find out what makes these three companies worth your consideration. 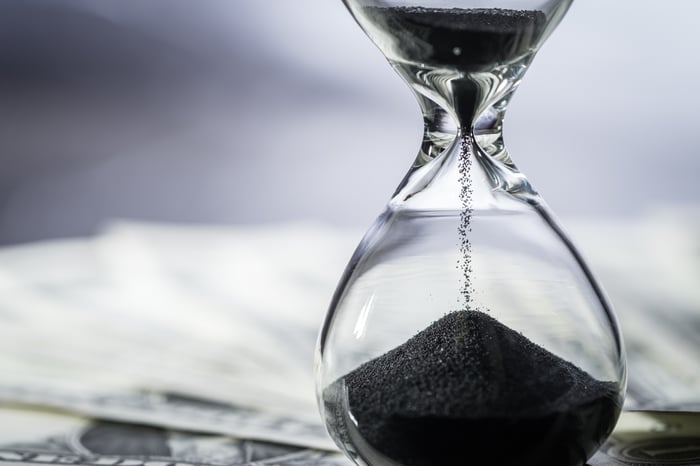 Keith Noonan (Take-Two Interactive): The video game industry has seen many corporate players come and go over the last two decades, but Take-Two Interactive has been one of its biggest winners and looks primed for long-term success. The publisher has significantly expanded the strength of its franchise portfolio, with properties like Grand Theft Auto, NBA 2K, and Red Dead Redemption putting up great numbers and giving the company a strong base of properties to rely on as it launches new series and ramps up the mobile wing of its business.

Grand Theft Auto V is still going strong, bringing in substantial retail and online sales despite having first released in 2013. The franchise has been an industry leader since 2001 and demonstrated incredible longevity to become one of the most successful entertainment properties ever. NBA 2K19 was North America's best-selling sports game last year, its third-best-selling title overall, and put up record online engagement and in-game digital spending for the series. Meanwhile, Red Dead Redemption 2 was 2018's best-selling game.

Take-Two has a stable of bankable properties and has shown that it can reliably deliver great content. That's a recipe for success in the video game industry, and a commendable track record on that front has allowed the company to build a healthy balance sheet. Take-Two doesn't plan to rest on its laurels and sit on its cash. Comments from management suggest that the company will continue to make acquisitions to bolster its position in the mobile gaming space and tap into the huge audience there. With high-quality gaming content becoming increasingly important in broader media and technology ecosystems and the likelihood that the global gaming audience will see a significant expansion over the next two decades, there's a good chance that Take-Two Interactive will be a strong performer over the stretch.

Buffett already bought these businesses. You should hold onto them.

Rich Smith (Berkshire Hathaway): A lot can happen in 20 years. Today I'm going to place a bet on one particular thing happening:

At some point in the next 20 years, Warren Buffett is (probably) going to die.

I know that sounds morbid, but consider that according to the National Center for Health Statistics, a white male born in 1930, such as Warren Buffett, had a life expectancy of 60 years at time of birth. At age 88 today, Buffett should actually have already been dead for 28 years. Statistically speaking.

Now, factually speaking, Warren Buffett isn't dead yet (although he is planning on it). But once the Oracle of Omaha does, in fact, pass away, a lot of folks are going to be tempted to sell Berkshire Hathaway, certain that without the world's greatest investor at its helm, Berkshire's days of beating the market will be well and truly over.

Why? Because for the last 55 years, Warren Buffett -- this self-same world's greatest investor -- has devoted himself to buying up the greatest businesses in America (and around the world) and gathering them together under the umbrella of one single stock symbol: "BRK." Even in a worst-case scenario, where no one ever replaces Mr. Buffett, no one equal to him at the task of adding to this portfolio of great businesses -- the companies he's already bought are still right there within Berkshire Hathaway.

Unless some new CEO makes a great, big goof and sells them, they'll remain there for the next 20 years, 30 years, and beyond.

Chuck Saletta (Kinder Morgan): Love it or hate it, the reality is that demand for oil and natural gas is expected to remain strong for decades to come. With that demand for those types of fuels comes a need to move them from where they get produced to where they ultimately get consumed. That's the foundation that makes Kinder Morgan worthy of your consideration as a stock to hold for the next 20 years.

As one of the largest energy infrastructure companies in North America, Kinder Morgan boasts around 84,000 miles of pipelines crisscrossing the continent. Those pipelines provide some of the safest and most economical ways to transport that energy around.

Still, as Kinder Morgan itself discovered when trying to expand its Canadian Trans Mountain Pipeline, there is frequently a lot of political opposition to pipelines getting built or expanded. Somewhat ironically, however, that opposition actually provides something of a moat around the company's existing operations. The difficulty and cost involved in laying new pipelines mean that existing infrastructure -- such as the infrastructure Kinder Morgan owns -- faces that much less competition.

While it's true that Kinder Morgan was forced to cut its dividend in 2015, the company used the improved cash flow from that cut, along with some asset sales, to shore up its balance sheet. That means that today's Kinder Morgan is financially much stronger than it was just a few short years ago. That should give today's investors even more confidence that the company looks like a reasonable one to potentially hold onto for the next 20 years.