The stock is up sharply from its $26 reference price, but there's still an opportunity to buy the shares at less than their intrinsic value.

Following Lyft, Pinterest, and Uber, another "unicorn" (a start-up with a private valuation above $1 billion) has been set free into the public markets. Slack Technologies (WORK) completed its direct public offering last Thursday, and unlike Lyft and Uber -- which are now "busted" IPOs -- shares of the seemingly ubiquitous workplace collaboration software provider have performed well. Monday's $35.76 closing price is at a 38% premium to the stock's $26 per share reference price. Many may be thinking that this pop has eliminated any opportunity for fundamental investors to pick up Slack at a reasonable price. Well, think again, for as one value investor quipped recently, "The three most dangerous words in investing are 'I missed it.'"

Even at their current price, there is evidence to suggest that Slack Technologies shares remain undervalued. I have highlighted the work of Theta Equity Partners before, and the research firm has already distinguished itself in regard to unicorn share offerings. Theta has pioneered a powerful approach to customer lifetime value analysis that takes a deep, data-driven look at customer behavior, and it ran Slack's numbers through its model. 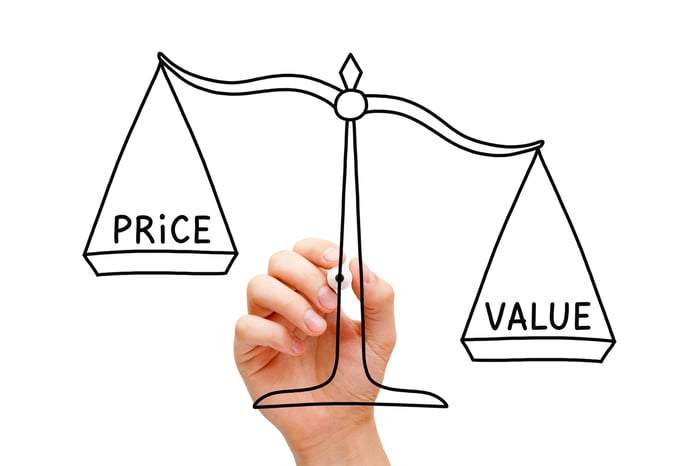 I won't keep you in suspense -- here's what Theta concluded in regard to Slack's valuation prior to its share offering (emphasis in the original):

Under the baseline assumptions outlined above (12% WACC [weighted average cost of capital], 7 years of revenue expansion for each cohort, and achieving long-term margins in 7 years), our fair value estimate of Slack's equity is $22.4B ...

For reference, Slack's market capitalization at Monday's closing price, per Bloomberg, was $18 billion, roughly 20% below Slack's baseline fair value estimate and a 40% discount to the most favorable scenario (which doesn't seem wildly far-fetched).

Conversely, Theta's analysis shows that Slack's fair value holds up well under adverse changes in assumptions (emphasis in the original):

​In the downside scenario, assuming that it takes Slack 10 years to achieve the long-term margins, our fair value estimate is $20.6B. If TAM [total addressable market] ended up being one half or one third of our estimate, Slack's fair valuation would be $20.1B or $18.4B, respectively. Finally, if we assume that Slack achieves only the bottom of the operating margin range in the long run, Slack's fair valuation would be $18.6B.

Note that the lowest of these "downside" fair value estimates remains higher that Slack's present market value. The robustness of Slack's fair value to adverse assumptions creates a favorable risk-reward asymmetry around Theta's base case (my emphasis):

We would need to see a much sharper weakness in TAM and/or margins to fall well below Slack's valuation recently. This is certainly possible, but it is also possible or even likely to see the valuation upside if the base case scenario were to be realized, as WACC would presumably fall in line with the peer set as the business matures.

Great businesses don't always get the credit they deserve

Is it possible that Slack shares are still priced at a discount to their intrinsic value? With Lyft and Uber's high-profile flops raising skepticism of high-flying Silicon Valley companies, I think it is.

Although it happens somewhat rarely, great businesses -- and Slack has the makings of a great business -- occasionally go public at valuations that significantly understate their potential to produce growing, rock-solid cash flows.

The most prominent example I can recall is MasterCard's (MA -0.35%) initial public offering, in May 2006, which saw the payment card processor's stock price at $39, $1 below its pricing range of $40 to $43 per share, reportedly due to the poor performance of Vonage, which had gone public just one day earlier. MasterCard shares closed at $46 on the first day of trading.

Twelve months later, MasterCard's stock had tripled from that first-day closing price; five years on, it had risen sixfold (Vonage, on the other hand, has never traded above its $17 IPO price). I'm not suggesting that Slack will achieve the same returns, only that the market can underestimate the intrinsic value and compounding potential of a terrific business, even when that business is under the spotlight of an initial public offering.

Good news: You're not too late!

If this sounds interesting -- and it should, if you're a long-term investor in individual stocks -- I suggest you begin by reading Theta's analysis of Slack's economics and its subsequent valuation. Superior businesses that go public at a discount to their intrinsic value are rare enough that stockpickers should give this opportunity their full consideration. Failing that, this looks like a case in which investors' "I missed it" lamentation could prove costly in terms of forgone returns.