One is a challenger to the other's massive market leadership.

If you're looking for a central processing unit (CPU), the computing engine of most computers, laptops, and data centers, there are really only two options: Intel ( INTC -0.51% ) or Advanced Micro Devices ( AMD -4.43% ). Intel is the $215 billion market cap gorilla in the room, while AMD is the upstart challenger -- though AMD is no start-up, with a market cap of $33 billion.

For years, Intel had pretty much dominated the market, with a large majority of PC and notebook CPUs and over 90% of the server CPU market. However, that tide is now reversing. Under CEO Lisa Su, AMD has developed chips with fabrication manufacturing partner Taiwan Semiconductors ( TSM -1.95% ) to surpass Intel in the race to a 7-nanometer (nm) processor (equivalent to Intel's 10nm). 2019 should be a pivotal year as AMD begins selling many new 7nm chips in the upcoming quarter, while Intel won't have its 10 nm chips out until the end of the year.

So, how dire are the problems for Intel, and which company is the better bet at this moment? 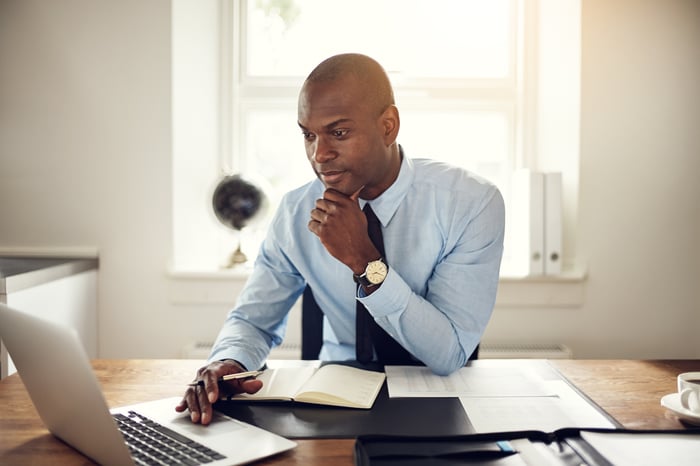 Back in 2006, AMD was actually nearly even with Intel in terms of market share in consumer- and PC-related processors at roughly 45% of the market. Currently, AMD holds just a 17% share of desktops and 13% share of notebook CPUs through Q1 2019.

So, while it's difficult to tell how much of a surge AMD will see over the coming quarters and years, it's clear based on the historical precedent that AMD has the potential to make a big dent. In fact, an Intel internal memo recently leaked to Reddit showed Intel executives acknowledging and discussing the significant threat posed by AMD.

The new market share will come from AMD's entire portfolio. AMD will ship its new Gen 2 Ryzen Desktop CPUs soon, which actually outperformed Intel chips based on leaked test results. AMD will also unveil its new Rome 7nm server processors, which have already been selected by the likes of Amazon.com and Dell Technologies for use later this year.

How Intel is reacting

Of course, Intel isn't standing idly by. The company expects its 10nm consumer chips to be ready by the holiday season this year, while its 10nm Ice Lake data center chips should be ready by the first quarter 2020. In addition, Intel is proactively cutting prices for its current consumer CPUs by about 10% to 15% -- the lowest prices at which they have ever retailed. The move is probably a smart one that will buy Intel some time, and could help mitigate the market share loss to AMD. Still, it's not something one exactly likes to see as an Intel investor.

Intel is also looking for growth by diversifying into other segments of the semiconductor market. It's made several large acquisitions over the past few years, including the 2015 $16.75 billion acquisition of Altera, a maker of field programmable gate arrays, and the 2017 $15.3 billion acquisition of Mobileye, which makes software for self-driving cars. Most recently, the company acquired Barefoot Networks, which makes programmable chips for data center switches, for an undisclosed amount.

These are admirable attempts by Intel to become a more diversified conglomerate, though these new chip ventures have fiercer competition and likely worse economics than the highly profitable near-monopoly Intel enjoyed in CPUs over the past decade.

Of course, the market has taken notice of all of these developments and has bid up AMD stock to some 30 times next year's earnings estimates, while Intel trades at just a 10.8 P/E ratio and pays investors a 2.6% dividend to boot.

Therefore, Intel may still be the choice for value investors and income-seekers. However, in the world of technology, trends can maintain themselves for a long time, as strength tends to beget more strength, so I would actually feel better owning AMD right now, despite its much higher valuation.

There's also another important reason I'd lean toward AMD: Lisa Su's leadership. Su has led AMD's massive comeback since taking the reins in 2014, and I'd put my faith in her continuing to execute.

Meanwhile, Intel recently named longtime CFO Bob Swan to the permanent CEO role, a role he initially turned down after former CEO Brian Krzanich left the company in 2018. I recently wrote how Swan's taking the job is a tad awkward, while it's also worrisome that Intel had such trouble finding a CEO willing to lead the company.

In summary, momentum and leadership at the top can be determining factors in the world of tech, which is why AMD is the pick for me at this moment.