These tech giants are paying high prices for defensive acquisitions as their core businesses slow.

Woody Allen once said a relationship is like a shark: It has to constantly move forward or it dies. It appears the same mentality applies in the world of tech stocks: If you're not growing, you're dying. Yet when successful tech companies become big enough, it becomes harder to grow, and many tech companies turn to mergers and acquisitions to achieve growth targets and fend off competition... but it usually comes at a price.

In the past couple weeks, three tech giants -- Alphabet (GOOG 2.70%) (GOOGL 2.62%), salesforce.com (CRM 0.86%), and Intel (INTC 0.89%) -- have all made sizable acquisitions. But while savvy and well-timed acquisitions can lead to tremendous future gains, these three transactions seem like defensive attempts to fend off competition and buy growth at high prices. Here's why. 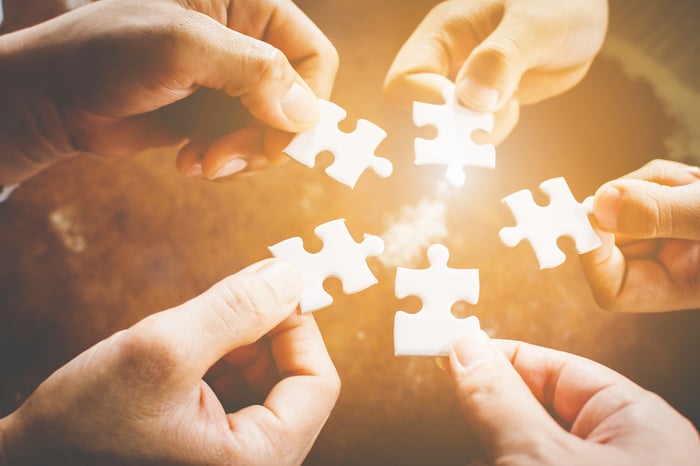 The first big acquisition came from Alphabet, which announced on June 4 that it was acquiring data analytics start-up Looker for $2.6 billion. That's a big price tag, but Alphabet was actually already an investor in Looker through its venture capital wing Capital G. The two companies also share about 350 customers, according to CNBC.

Looker's analytics software works not just with Google Cloud Platform but all the major clouds, including Amazon.com's Amazon Web Services (AWS) and Microsoft's Azure, and the company says it will continue to do so going forward.

It's interesting Google thought it necessary to purchase Looker outright, especially since both Amazon and Microsoft have their own in-house data visualization services, called Amazon QuickSight and Microsoft BI, respectively. That leads one to wonder why Google Cloud couldn't develop its own in-house offering.

The acquisition is the first major one under new Google Cloud head Thomas Kurian, who came to the company from Oracle in November. One explanation for the purchase could be that Kurian believes third-party (cloud-neutral) software firms like Looker will reign supreme in the next wave of the cloud revolution. Google, which got into cloud late after Amazon's multiyear head start, and which doesn't have the enterprise expertise of Microsoft, appears to be betting on, and promoting the vision of, multi-cloud usage for customers, in order to avoid "lock-in" to a single vendor.

Pushing a multi-cloud agenda would obviously benefit the laggard -- in this case, third-place Google -- by preaching diversification away from AWS and Azure and splitting workloads between all three. By purchasing Looker, Google indirectly benefits from the success of multi-cloud usage among its rivals, as long as they use Looker's software. In other words, something is better than nothing, even if it means ceding some cloud workloads to competitors.

Looker was not the only cloud-independent business intelligence software company out there. Two other large public data analytics/visualization firms were Domo and Tableau (DATA). Just four days after the Google-Looker announcement, Salesforce announced it was acquiring Tableau in an all-stock deal for a whopping $15.7 billion -- a near-50% premium to Tableau's stock price at the time.

Salesforce is the leader in customer relationship management software, but as its core becomes larger, it becomes harder to grow, and rivals -- especially Microsoft -- are gunning for Salesforce's lead. Salesforce is reacting by trying to become a larger tech conglomerate to go head-to-head against the cloud infrastructure tech giants. That's why Salesforce is paying huge sums for companies that aren't directly related to its core CRM software business.

However, this all comes at a cost, and both the Tableau and Mulesoft acquisitions have a FOMO (fear of missing out) feel to them. Acquisitions are usually only accretive when an acquirer can greatly expand an acquisition's product beyond what the acquiree could do on its own, but it looks as though Salesforce is merely paying up for already-successful companies just to stay in the game.

The company's P4 open source programmable chipset already found its way into Arista Networks switches last year, and into Cisco switches shortly thereafter. The acquisition of Barefoot will strengthen Intel's data center networking portfolio, where Intel aims to derive most of its growth over the next few years.

While Barefoot does appear to be a good asset, we won't know how much Intel paid for the company until the deal closes and Intel releases its financial statements. In addition, the acquisition also feels a bit reactive to NVIDIA's purchase of Barefoot peer Mellanox Technology back in March. It's also not clear why Barefoot would do better under Intel than it could independently, with one analyst saying, "The best thing Intel could do is leave [Barefoot] alone but use them strategically."

Whenever a company currently struggling for growth and losing market share in its core segment makes an acquisition in a hot sector, one should be wary of how much value it really adds, or whether the acquisition is really just a defensive move to avoid missing out on a big (and competitive) secular trend.

Unfortunately, it appears these three acquisitions all fall into the latter category.

Editor's note: A previous version of this story inaccurately cited Craig Barratt as the founder of Barefoot Networks. Barratt is the current CEO, but Nick McKeown co-founded the company and serves as chief scientist and chairman. The Fool regrets the error.