Income investors need to take a look at Apple, Welltower, and AT&T.

Your retirement years should be filled with relaxing, starting new hobbies, and spending time with family and friends -- and not worrying about your investments.

That's why it's crucial to pick stocks now that are perfect for retirement and then sit back and reap the rewards later. To help track down a few of the best companies that fit this description, we asked three Motley Fool contributors for their thoughts on the best dividend stocks for retirees, and they came back with Apple (AAPL 2.32%), Welltower (WELL -0.42%), and AT&T (T 0.09%). Here's why. 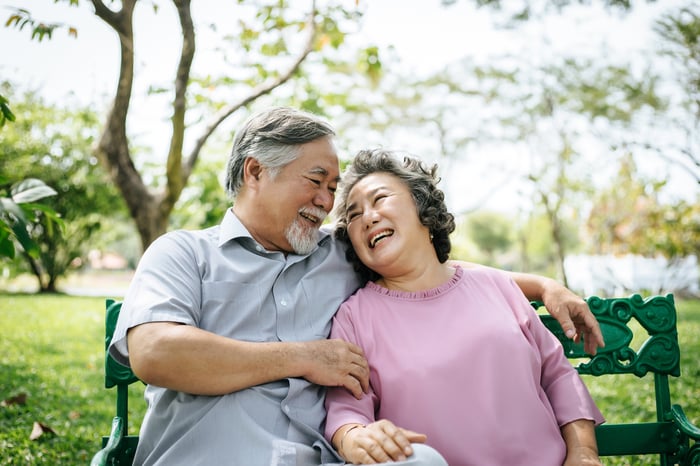 This megatech should be on dividend investors' radar

Nicholas Rossolillo (Apple): When it comes to dividends, Apple likely isn't anywhere near the top of many income investors' lists. I think it should be.

It's true that the tech giant only pays a dividend that currently yields 1.6% a year. However, since initiating that payment in 2012, Apple has raised its quarterly payout to shareholders each year and has now doubled what it originally started doling out seven years ago. The marquee iPhone business has come under pressure this year as premium pricing has lost some of its power and consumers are waiting longer to replace old phones. But Apple has several levers to pull now (like its services business) and is still massively profitable. There is plenty of room for that dividend to continue to rise in the years ahead.

Plus, dividends aren't the only way shareholders extract cash from a business anymore. Share repurchases are another way owners of a stock get a bonus. Rather than getting cash in hand, Apple has been buying back its own stock -- which reduces share count and thus boosts earnings per share. That, in turn, can help keep a stock afloat during hard times and rising higher over time.

Apple is on course to return a massive amount of cash via this method in the next couple of years. After the company's fiscal 2019 second quarter, it had a net cash position of $112.8 billion but has the goal of getting to a net-cash-neutral position. Taking advantage of depressed stock prices at the start of the year, Apple repurchased $24 billion worth of its own stock during the quarter -- a huge windfall for shareholders that helped stabilize the stock. Paired with that cash dividend payout, that makes Apple a top pick for income investors in my book.

Poised to thrive for decades

Daniel Miller (Welltower): Retirees looking for stocks to invest in should start by identifying companies that are poised to benefit from long-term tailwinds, as well as companies that have had a consistent track record of returning value through dividends. One stock that checks both those boxes is Welltower, a real estate investment trust (REIT) that owns senior housing, post-acute care communities, and medical properties. 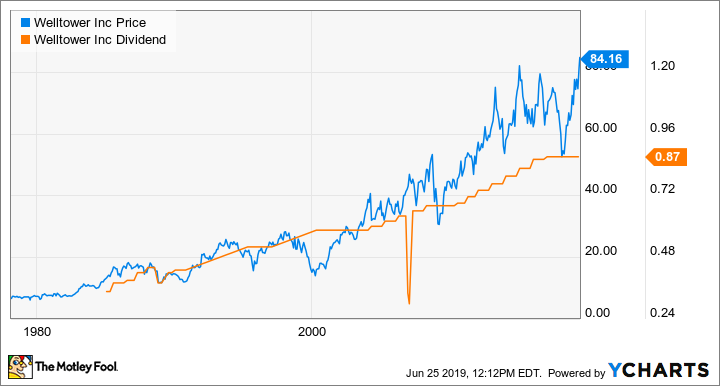 As you can see in the graph above, Welltower has returned value to shareholders through its consistent dividend increases as well as its rising stock price. And as a REIT, the company is required to pass on 90% or more of its taxable income to shareholders in the form of dividends. That requirement means as long as Welltower's business remains solid, investors are in for strong dividend payouts. Fortunately, Welltower should benefit from demographic tailwinds over the coming decades.

The 2030s will be a wild change for the U.S. population, since by 2030, all baby boomers will be older than 65 and the 80-and-older population is expected to roughly double. The latter group spends roughly four times more on healthcare per capita than the national average. If Welltower can continue to build its portfolio of high-quality assets and properties of senior housing and nursing facilities, among others, its business should thrive in the coming decades.

Thanks to Welltower's history of returning value to shareholders through its dividend and increasing stock price, as well as being positioned to thrive with changing demographics over the next couple of decades, the company is a dividend stock retirees should take a look at.

Chris Neiger (AT&T): When it comes to paying a hefty dividend and having a long-standing track record of raising it, it doesn't get much better than AT&T. The company's current dividend yield of 6.3% is higher than many of its dividend peers, and the telecom just logged 35 consecutive years of raising it. And with AT&T generating $25.8 billion in free cash flow over the past 12 months, the company has enough cash to keep its dividend-raising streak going.

AT&T will benefit from the latest evolution in cellular technology, called 5G, and says that it will make the new service available in 21 cities by the end of this year. 5G is not only much faster than 4G LTE, but it will also bring more connectivity possibilities for Internet of Things devices (like connected autonomous vehicles). 5G could bring $619 billion in new services by 2026, by some estimates, and with AT&T already bringing 5G to some markets now, the company is making early moves into this space.

AT&T's impressive dividend, steady free cash flow, and opportunity to benefit from 5G make this stock a great pick for retirees. And when you factor in that AT&T's shares are trading at just nine times the company's forward earnings, this telecom looks like a solid bet.