Apple (NASDAQ:AAPL) has high hopes for Apple News+, the premium news subscription service it launched in March. Content publishers had long been frustrated with poor monetization in the free version of Apple News, and a subscription fee could prop up the underlying economics of the paid version of the service. However, Apple wants half of all that subscription revenue, leaving publishers to divvy up the rest based on their proportionate share of engagement.

It's not going well. 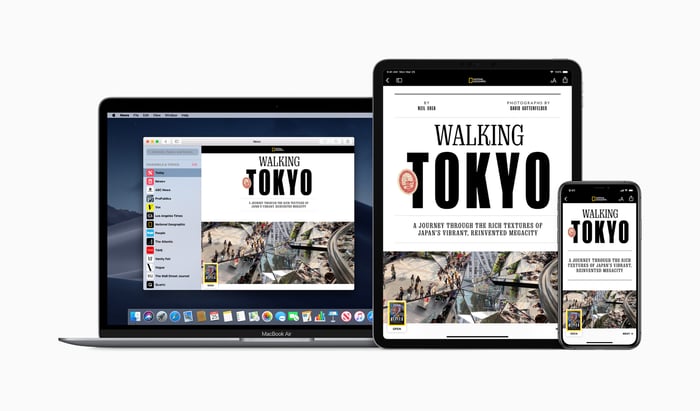 Publishers aren't getting much

Business Insider reported last week that Apple is already considering making changes to the service to address a wide range of issues. News+ is more or less a rebranded version of Texture, the subscription-based magazine service that Apple acquired in early 2018. Texture was available on other platforms before getting shut down, while News+ is not. Apple reportedly garnered 200,000 free trial users for News+ immediately after launch, but it's unclear how many of those users may have converted to paid subscribers.

Apple made lofty promises to publishers regarding how much subscription revenue they could expect, according to BI. One publishing exec told the outlet that the revenue has been "one twentieth" of what Apple forecast, and that the revenue is comparable to how much they were getting from Texture -- which is to say, not a lot.

Other concerns include confusion around the interface since free content is presented next to paid content (with a small News+ icon), as well as focusing on magazine formats is proving less than ideal for news content that is typically text-based. Additionally, publishers want ways to bolster engagement within their own publications, since that's how they get paid. Many publishers feel like News+ is an unfinished product and that Apple isn't really all that committed to it, according to the report.

Perhaps most troubling is a lack of underlying demand to begin with. Magazines have been in a long-term decline for years, and no one was clamoring for a service that offered subscription-based access to hundreds of periodicals. "No one wants all-you-can-eat magazine content," one executive told BI.

Apple wants to address the problems

For what it's worth, Apple seems receptive to feedback from its publishing partners and is attempting to address the concerns. That might require some patience, as Apple tends to release bigger updates at a slower pace, instead of other companies that constantly tweak apps with frequent, iterative releases.

While Apple News+ seems off to a rocky start, the company could still turn things around. Apple is committed to News+ for at least a few years. The New York Post reported earlier this year that Apple's total cost for acquiring Texture was a massive $485 million, which only makes sense if the bulk of that total consists of content licensing costs over the next three years.

News+ is unlikely to ever be material to the business, but will contribute a small number of paid subscriptions to the company's march to 500 million.