Office furnishings and design giant Herman Miller (NASDAQ:MLHR) impressed investors with its final quarterly report of fiscal 2019 last week. Results released on June 26 reveal that despite headwinds arising from Brexit-inspired uncertainty in Europe and trade disputes between the U.S. and China, the manufacturer is still enjoying sustained demand from corporate furnishings buyers and retail customers. Herman Miller's success was fueled during both the quarter and fiscal year by brisk new order growth that was undergirded by a tight hold on overhead expenses.

As we break down the details of the last three months, note that all comparative numbers are presented against the prior-year quarter. 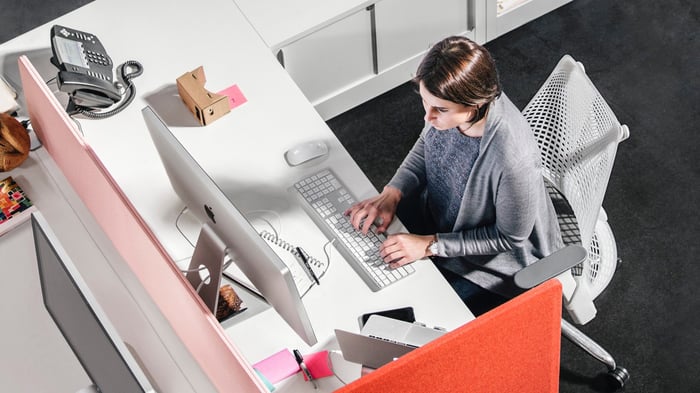 We were encouraged by broad-based sales and order growth for the quarter, supported by favorable macro-economic conditions and continued traction from our strategic priorities. We also further positioned our Retail business for profitable growth with the opening of three new Design Within Reach studios in the fourth quarter, a lease termination related to an underperforming studio and beginning the transition to a new, state of the art distribution center in Batavia, Ohio. These actions reflected expenses of $4.5 million during the quarter and, while they pressured profitability in the quarter, are important enablers for future growth and operating margin expansion of our Retail business. Even after factoring in these initiatives, consolidated sales growth, gross margin expansion and well-managed operating expenses combined to drive 33% growth in adjusted earnings per share compared to the same quarter last year.

For the first quarter of fiscal 2020, Herman Miller's management expects revenue to fall between $650 million and $670 million. This implies 6% annual organic revenue growth at the midpoint of the range. Diluted EPS are penciled in at $0.77 to $0.81, a range which, while close to current-quarter EPS, implies roughly 32% growth over the $0.60 in diluted EPS the company achieved in the first quarter of fiscal 2018.