With the looming threat of a 25% tariff on apparel made in China, Oxford Industries has adjusted its supply chain.

As an apparel company, Oxford Industries (OXM 1.21%) finds itself in the bull's-eye of the U.S.-China trade war. Oxford Industries sells clothing under the brands Tommy Bahama, Lilly Pulitzer, and Southern Tide, and although 96% of the company's revenue last year was from customers in the United States, 70% of its products were sourced from China.

Geopolitical circumstances have put Oxford Industries in an awkward position with regard to its supply chain. However, it turns out the company has some tricks up its sleeve. On its most recent earnings call, the company affirmed financial guidance after noting that it had reoriented its supply chain to avoid an impending 25% tariff.

Trade tensions eased at the end of June when the U.S. and China agreed to a truce on additional tariffs and a restart to negotiations over a deal that could see tariffs reduced or removed. However, the situation changes from week to week and companies like Oxford Industries want to be prepared for all scenarios.

Tariffs have had little impact on Oxford Industries' business so far, but the company's management team wants investors to know that it is prepared. At issue is a 25% punitive tariff on Chinese imports that has been under consideration, though it may not be implemented if the U.S.-China trade disputes are resolved.

According to the company, a shirt that retails for around $100 costs roughly $20 to manufacture. A 25% tariff would add $5 in manufacturing costs. This might not sound like a lot compared to the $100 retail price, but the company incurs additional costs to ship product to the U.S., market products to customers, and hire employees to sell the items. And not everything that retails at $100 sells for $100.

Oxford Industries has taken two key steps to secure its low cost of production. First, it has negotiated lower prices with its Chinese suppliers so that they absorb most of the hit from tariffs. Second, the company has moved some production out of China and into other countries, such as Vietnam, Thailand, India, and Peru. The company has already started making these changes and expects to complete the supply chain transition by mid-2020. If new tariffs were implemented today, Oxford would likely take a short-term hit to earnings, but the longer they are delayed, the less the overall potential impact.

With as much as 70% of its products coming from China, the U.S.-China trade war has created a real headache for Oxford Industries. But the company has risen to the challenge and will be able to maintain its low cost of production as a result. 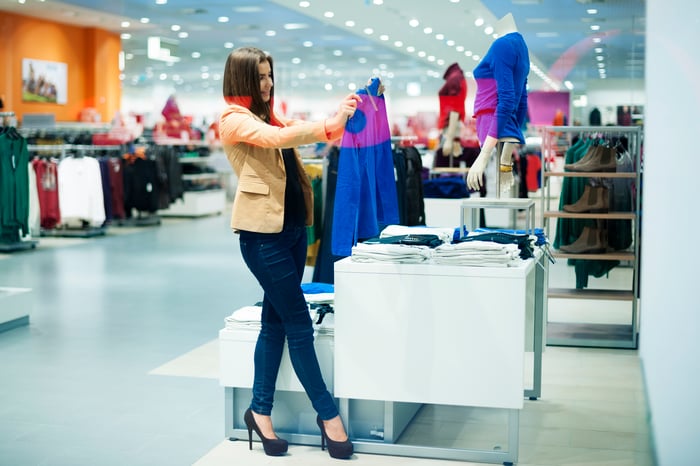 Oxford Industries has shown strong financial results despite headwinds in the consumer retail sector and the uncertainties created by tariffs. Q1 2019 saw the company report same-store sales growth of 2%, and sales and earnings per share that were above the top end of the company's issued guidance.

The company credits its success to its careful rollout of stores across the U.S. Despite strong brand awareness of the Tommy Bahama label, the company operates only 167 Tommy Bahama stores. In total, Oxford Industries operates 230 stores across all its brands. This has left its brick-and-mortar opportunity relatively underpenetrated and has enabled the company to continue slowly expanding its store base even while other companies have been aggressively closing stores.

Oxford Industries has also been successful in its adoption of an e-commerce strategy. The company reports that approximately 21% of its total sales occur online, which has supported strong revenue growth. On the Q1 earnings call, CEO Thomas Chubb stated, "With our high average ticket and a high gross margin, e-commerce is a very profitable channel and we see its continued growth as a key to Oxford's continued success." 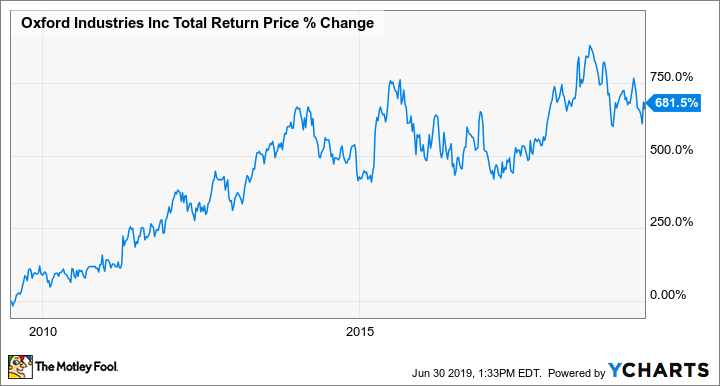 The company's continued solid financial results have translated into strong results for long-term shareholders. There has been some recent short-term volatility in the stock price related to external global economic factors, but Oxford Industries has proven on multiple occasions that it can execute its business plan even in uncertain times. Investors should expect the company to continue its long-term upward trajectory as it thoughtfully grows its business and mitigates supply chain costs.