The global e-commerce market is poised to grow to $24 trillion by 2025, and while consumers have been able to buy goods and services online for years, e-commerce sales still account for just 12% of all U.S. retail sales.

It's a sign of how we're in the early stages of e-commerce growth and development that companies are still continually coming up with new ways to direct how this market evolves. That's why it's essential for investors to keep an eye on how Amazon.com (NASDAQ:AMZN), Shopify (NYSE:SHOP), and PayPal Holdings (NASDAQ:PYPL) are shaping the e-commerce landscape to outpace their competitors. 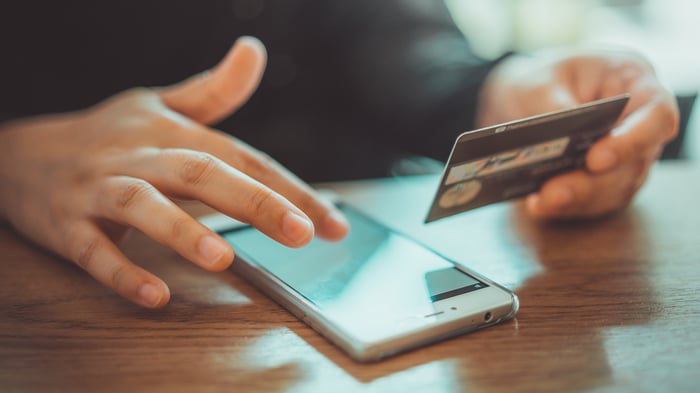 There's no denying that Amazon is one of the biggest names in the U.S. e-commerce space. Nearly 38% of all online sales in the U.S. happen on its platform, and the company now boasts more than 100 million Prime members in the country.

So if Amazon dominates e-commerce, how exactly is this company a disruptor? Because it continues to make even its own core offerings obsolete.

For example, when Amazon introduced free two-day shipping for its Prime members years ago, it forced some of the biggest names in the retail industry to follow suit. And now that Walmart, Target, and others have added their own fast and free shipping offerings, Amazon upped the ante when it recently transitioned to free one-day shipping for members. While its competitors have some one-day shipping options, they can't match the number of items Amazon makes available for one-day shipping.

By pushing the envelope time and again with its Prime shipping speed, Amazon is perpetually disrupting itself and its e-commerce competitors. When you consider that the company is also the leading public cloud computing provider and developing a growing advertising business, Amazon has proved it's not satisfied with disrupting just the e-commerce market.

While Amazon has the name recognition in the e-commerce space, smaller players like Shopify are also filling in niche e-commerce markets. Shopify's cloud-based platform allows businesses to set up their online shops easily, and the company is growing by leaps and bounds.

Shopify already has more than 800,000 merchants using its services, and in the most recent quarter, its sales jumped 50% year over year to $320.5 million.

Shopify is disrupting the e-commerce market by making it easy for businesses to get started selling their products and services online. Not only has the company been successful with this strategy, but it's expanding its services to compete with bigger e-commerce players. For example, the Shopify Plus segment, the company's enterprise service offering that helps large businesses to sell their products online, now brings in 26% of the company's recurring revenue.

Another disruptor action presented itself when Shopify recently said it was starting a new fulfillment service that will help merchants bring timely deliveries to their customers and lower their shipping costs. This new service -- a direct challenge to Amazon (which has one of the most robust fulfillment networks in the U.S.) -- further illustrates Shopify's focus on changing the e-commerce game.

Who said that all e-commerce disruptors have to be sales platforms? PayPal is changing the way that businesses and consumers buy and sell goods online by making it easier to make online transactions.

So how is PayPal, a company that has been in the online payments game for years now, pushing the envelope these days? By allowing its users to move closer to a cashless society with its apps. For example, PayPal has begun expanding the use of its Venmo app -- which allows for easy financial transactions between individuals -- to point-of-sale merchant terminals and mobile payment transactions.

PayPal's online payment services and Venmo app are making it easier than ever for users to leave their cash behind and use mobile technology for nearly any kind of purchase.

Digital payments are still in their infancy, but PayPal CEO Dan Schulman believes that they represent a $100 trillion total addressable market for his company. And with its early moves in the space, PayPal is sure to tap into e-commerce's digital-payment growth in the coming years.

The e-commerce industry is no different than any other, in that it will likely have its fair share of ups and downs. For instance, the next economic downturn could put a damper on these companies' short-term gains. But the thing to remember is that Amazon, Shopify, and PayPal have already made significant inroads into the e-commerce market and are continually changing the industry. So investors holding on to these stocks for the long haul can ride out any short-term rough patches that might come along.