Organizational consulting services provider Franklin Covey (NYSE:FC) has maintained a rather ambitious bottom-line target for its current fiscal year of increasing adjusted EBITDA by nearly 70% against its full-year 2018 mark. The company's fiscal third-quarter earnings report, released on June 27, indicated that while it will still need a robust fourth quarter to meet its EBITDA expectation, the slated earnings expansion is within reach. Below, we'll discuss salient details from the quarter as well as Franklin Covey's rising longer-term prospects. Note that all comparative numbers in the discussion that follows are presented against the prior-year quarter.

What happened at Franklin Covey this quarter? 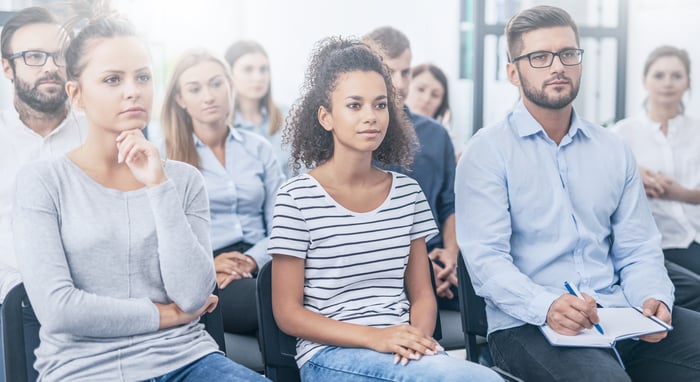 We're selling new subscriptions and retaining substantially all of the subscription and related revenue we contract. This is creating high lifetime customer value, significantly increasing our visibility into future revenue. It's also strategically and structurally durable because we're solving important problems and people are buying passes, paying upfront, and signing multiyear agreements...

Subscription and related sales grew 27% year-over-year, and year-to-date we're up 30%. Our total number of paying subscribers grew 34% compared to the same period last year. And in addition, our key subscription metrics continue to place us in the company of some of the very top subscription businesses.

Heading into the final quarter of the fiscal year, Franklin Covey is holding to its expectation of full-year EBITDA of $18 million to $22 million, which at the midpoint will represent a leap of 68% versus the $11.9 million in adjusted EBITDA the company chalked up in fiscal 2018.

As I had discussed in my earnings preview, to comfortably hit full-year goals in a final quarter that itself is expected to be quite strong, the company would benefit if it could first land "a third-quarter adjusted earnings punch on the order of $3 million to $4 million." Franklin Covey indeed hit this range, notching adjusted EBITDA of $3.1 million during the last three months -- well exceeding the $0.6 million in adjusted EBITDA it earned in the comparable prior-year quarter.

The company has chalked up $7.2 million in adjusted EBITDA in the first three quarters of 2019. If it matches the $11 million in adjusted earnings booked in the fourth quarter of 2018, it will meet the bottom of its anticipated full-year earnings range. But with the scale the company is achieving with each passing quarter, it's possible that Franklin Covey will grace the top of its $18 million to $22 million full-year earnings target, or perhaps even exceed this band altogether when it reports on the fourth quarter in late September.