These big companies could be big winners.

Think big. Specifically, think big when it comes to the size of the stocks to add to your investing portfolio this month. There are plenty of large-cap stocks that appear to be great picks right now. 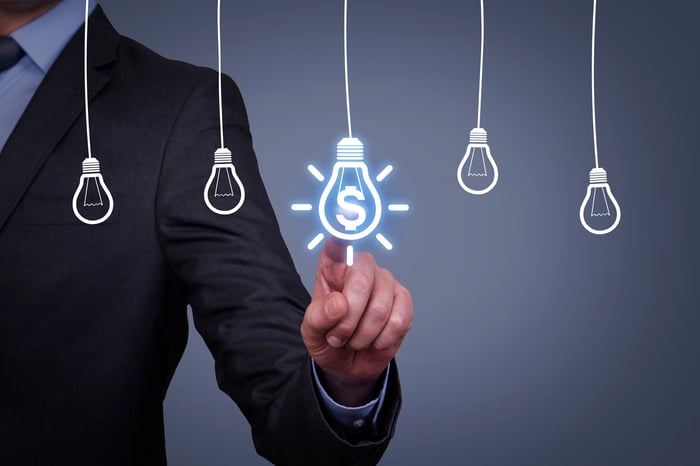 Keith Speights (Alphabet): I could list lots of reasons to buy Alphabet in July (or any other month, for that matter), but all of those reasons can be lumped into one of two major categories: Alphabet's moat and its optionality.

Warren Buffett popularized the use of the term "moat" to describe a company's ability to sustain a competitive advantage over its rivals. A big part of Alphabet's moat stems from what's called the network effect, where the value of a product or service increases as more people use it. Alphabet claims eight products that have at least 1 billion monthly users: Google Search, YouTube, Gmail, Chrome, Maps, Android, the Google Play store, and Google Drive.

Alphabet's moat enables the company to deliver fantastic financial results. The tech giant made nearly $137 billion in revenue last year, with close to $31 billion in profit. Alphabet's cash stockpile tops $113 billion. The company invests significantly in research and development to improve its products, which helps strengthen its moat.

This impressive financial position also allows Alphabet to pour money into new products. This gives the company optionality, which refers to having multiple paths to generate growth. Alphabet's famous "other bets" segment includes an intriguing variety of businesses that could be huge moneymakers in the future. Probably the most important of these is Waymo, Alphabet's self-driving car subsidiary. UBS analyst Eric Sheridan thinks that Waymo will be a $100 billion business by 2030.

What about rumblings that the U.S. government might break up Alphabet? I doubt it will happen. Even if it does, I agree with Needham analyst Laura Martin that the sum of the parts is worth a lot more than Alphabet trades today.

Keith Noonan (AT&T): It's not unusual to hear that "boring can be beautiful" when discussing potential investments. lt's also not unusual to see "boring" used to describe AT&T stock -- and often with more negative connotations. The bearish position hasn't necessarily been unwarranted. The stock's performance over the last decade has been disheartening, with its total return lagging far behind that of the S&P 500 index. But it's time for a reappraisal of gloomy reads on the telecom giant.

5G internet will be at the foundation of many of the biggest technological advancements over the next decade, and AT&T is likely to be a leading player in the space. The Time Warner acquisition did add to the company's sizable debt load, but the benefits of this move still don't seem to have been fully appreciated by investors.

Some of that is AT&T and Warner's fault, as early moves to bolster its direct-to-consumer streaming video business haven't produced great results. However, strength in content has quickly become one of the most sought-after advantages among tech companies because it can be leveraged to reinforce an overall ecosystem and generate valuable data, and AT&T now has one of the strongest global positions in the space.

With shares trading at just 9.5 times this year's expected earnings and sporting a 6% dividend yield, AT&T is a stock that could be a solid performer whether the market continues on its bull run or heads into a rougher stretch. The big dividend and low earnings multiples should provide some insulation in the event of market turbulence (the stock held up relatively well during big sell-offs for the broader market in 2018's final quarter), and it looks like some of the company's growth catalysts are still underappreciated.

This energy giant won't be on sale forever

Reuben Gregg Brewer (ExxonMobil): The yield on integrated energy giant Exxon is up around 4.5% -- that's near the highest levels in over two decades. Its price-to-tangible-book value hasn't been as low as it is today since the late 1980s. To put it simply, Exxon looks cheap today. 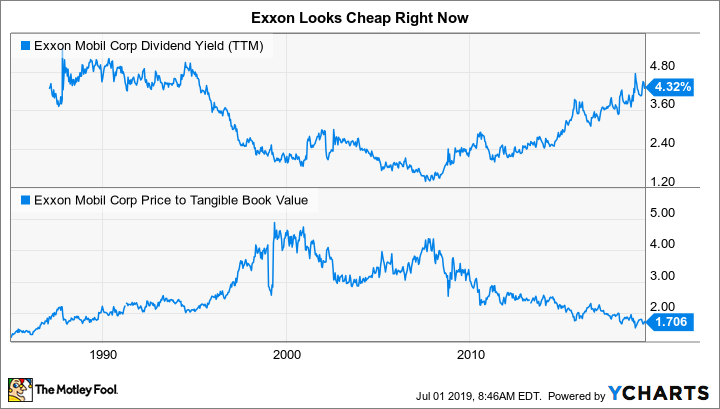 There are a few reasons for the energy giant's low valuation. For example, its oil production has fallen for three consecutive years. That said, a huge capital investment plan that will take the company through 2025 -- and includes spending as much as $35 billion a year -- is starting to show results. In the second half of 2018, Exxon's production started to ramp up again. And that was on the strength of the company's onshore U.S. drilling effort, which is just one of several major growth initiatives.

Another factor that has some investors worried is that Exxon is doubling down on carbon fuels at a time when some peers are diversifying into electricity. However, even if the world manages to reduce its carbon footprint, oil and gas will remain an integral part of the global energy picture. And since these carbon fuels are depleting assets, more drilling will likely be needed even in the most pessimistic scenarios. The bad news, then, isn't likely to be as bad as investors seem to fear.

Income investors who think long term, meanwhile, have an opportunity to buy a high-yielding company with a 37-year history of annual increases behind it -- a track record that none of its peers can match. Giant Exxon is definitely worth a deep dive today if you are an income investor... and, perhaps, even if you aren't.