Shares of Boot Barn Holdings (NYSE:BOOT) climbed 109.3% through the first six months of 2019, according to data from S&P Global Market Intelligence, on the heels of a pair of strong quarterly reports from the Western footwear retailer.

To be sure, Boot Barn started the year strong, popping more than 13% in a single day in January, after the company chose to release strong preliminary fiscal third-quarter 2019 results ahead of an investor-conference presentation. Quarterly revenue grew 13% year over year at the time, to $254 million, driven both by new store openings and a far-better-than-expected 9.2% increase in same-store sales. 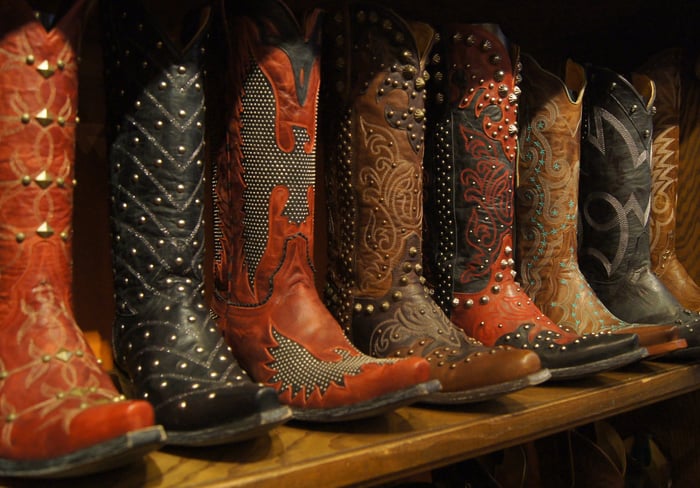 Boot Barn CEO Jim Conroy elaborated in January that the company had achieved a "solid start" early in its fiscal fourth quarter. Indeed, after drifting higher over the next few months, Boot Barn shares soared almost 9% a single day in May, after its fiscal Q4 results once again arrived well above its own growth targets. That time, same-store sales growth of 8.7% had helped drive a 12.9% increase in revenue, marking its eighth straight quarter of comps increases, and bringing full fiscal-year same-store sales growth to 10%.

What's more, Conroy again pointed out that at the halfway point of its fiscal 2020 first quarter, Boot Barn had continued to achieve same-store sales growth of 7.5%, even as it lapped a tough comparison to 11.6% growth achieved in the year-ago period.

If that wasn't enough, Boot Barn has sustained its relative outperformance while bucking concerns over the impact of tariffs on the broader footwear industry.

During the earnings conference call in May, Conroy explained Boot Barn's "direct responsibility" for paying tariffs on goods on its imports from China applies to roughly 10% of its total merchandise. While another 40% of its business is technically sourced from China via third-party vendors, Boot Barn should be able to largely offset incremental tariff costs, through a combination of strategic price increases and the portion of duties already absorbed by those vendors.

Boot Barn's next quarterly update -- likely its next catalyst for a big move up or down -- should be set to arrive in early August.

For perspective, management's current guidance calls for fiscal first-quarter sales of $178 million to $180 million, assuming same-store sales growth of 6%, with earnings per share of $0.20 to $0.22. Given the company's habit of underpromising and overdelivering in recent quarters, it should be unsurprising that Wall Street's consensus currently calls for revenue and earnings near the high end of those ranges. But with its incredible momentum so far in 2019, I suspect it should have little trouble living up to those expectations.