Smartphone shipments fell 4% globally in 2018, according to IDC, due to the saturation of the market and a lack of compelling features on new phones. That decline sent smartphone makers scrambling to introduce new designs, with foldable devices like Samsung's (NASDAQOTH: SSNLF) Galaxy Fold and Huawei's Mate X getting center stage attention.

Sony (NYSE:SONY), a distant underdog in that market, also reportedly wants to jump on that bandwagon with a foldable and rollable phablet. A recent leak reported by Twitter user Max J., aka @Samsung_News_, claims that Sony is developing a phone that can be rolled into a pocketable "Nautilus Design" tube, which resembles a concept device Samsung introduced a few years ago.

The leak claims that Sony's device could launch this December or in early 2020 and that current prototypes sport an LG display, 10x zoom camera, Qualcomm chipset, and a 3220 mAh battery. Investors should take this leak with a grain of salt, but launching such a niche device could be a bad move for Sony.

What Sony thinks will happen

Sony was once a contender in the Android smartphone market, but fierce competition from Samsung and other leaders reduced its global share to less than 1% last year, according to Counterpoint Research. Yet Sony still plows cash into the development and marketing of new Xperia devices every year, which causes its mobile communications (MC) unit to remain unprofitable.

Many investors, including myself, think Sony should shut down, spin off, or sell its MC unit. Its latest Xperia devices still don't stand out in the saturated Android market, its previous plans to turn its phones into hubs for wearables flopped, and it's diverting resources from more promising businesses like gaming -- which is also struggling as the PlayStation 4 matures.

Despite those criticisms, Sony is stubbornly sticking to its guns. It's trying to attract consumers with ultrawide (21:9) 4K OLED phablets like the Xperia 1, but many reviews claim that the new flagship device's tall form factor is awkward and that its battery life is sub-par. Simply put, Sony is targeting untapped niches with big phablets with high-quality screens, but the designs aren't really resonating with shoppers who can buy plenty of comparable phones at lower prices. 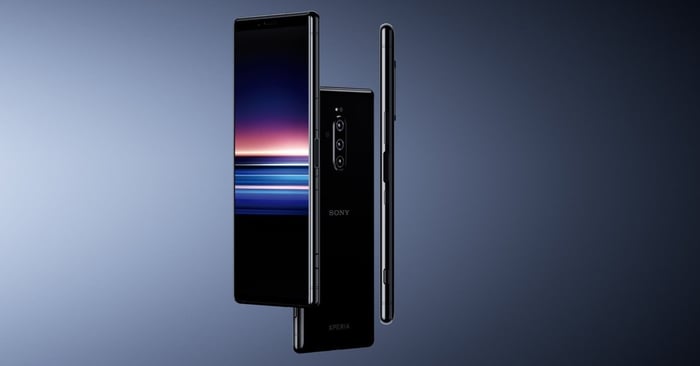 Unfortunately, that's why a rollable phone sounds like something Sony would make -- it targets a niche market with an odd form factor that looks unique compared to other devices.

Why a "rollable" Xperia would bomb

Sony's rumored design sounds unique, but it would bomb for two reasons. First, foldable displays are still expensive. That's why Samsung's Galaxy Fold costs nearly $2,000, and why Huawei's Mate X costs a whopping $2,600. A phablet with a fully rollable screen would cost even more -- and Sony simply doesn't have the clout to sell such a pricey device, especially when high-end leaders like Apple are struggling to sell more phones.

Second, the flat slate form factor used by modern smartphones already suits most users, and no one really asked for a smartphone that can be rolled into a tube. That's probably why Samsung ultimately decided to launch a foldable device instead of a rollable one.

Sony's rollable phone might just be a concept design, but it also fits the company's pattern of launching odd and experimental designs (like tall phones and awkward smartglasses) to expand its mobile business into niche markets.

Sony investors should hope that this idea stays on the drawing board, because it certainly won't save its ailing mobile business. To make matters worse, it could widen its mobile unit's losses and divert cash away from its higher-growth businesses.