Shopify (NYSE:SHOP) and PayPal Holdings (NASDAQ:PYPL) are betting big on the expanding e-commerce market, which some estimate will be worth $24 trillion by 2025.But the companies have very different business models. PayPal makes its money from the fees it collects each time consumers and merchants use its services for financial transactions. Meanwhile, Shopify sells cloud-based services that allow businesses to sell their own products and services online.

Both companies' shares prices have easily outpaced the S&P 500's 8% gain over the past 12 months, with PayPal's stock gaining 35% and Shopify's skyrocketing by more than 100%. But to determine which company looks like the better long-term buy from here, let's take a look at how each company is growing. 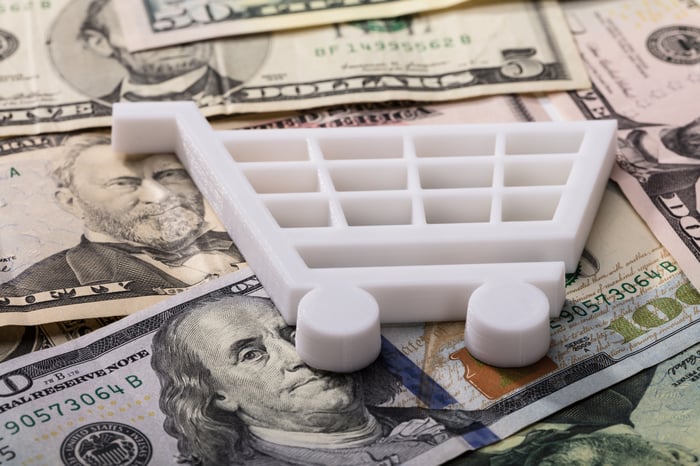 If you're unfamiliar with Shopify, the company's cloud-based e-commerce platform allows clients of all sizes to easily set up their own online shops. Its services are wildly popular. More than 800,000 merchants now use its e-commerce platform, and in the most recent quarter, its revenues popped by 50% year over year to $320.5 million.

One reason why the company has been so successful is that it has continued to find new areas in which to grow its business. For example, while it began primarily as a solution for smaller merchants, it has more recently been targeting higher-end clients with Shopify Plus, a premium service for large enterprise customers. Shopify Plus now provides 26% of the company's monthly recurring revenue, and represents an opportunity to benefit as more large companies focus on direct online sales.

If that weren't enough, the company recently announced a new fulfillment service which will compete with Amazon's similar offering. That should broaden Shopify's appeal among merchants looking for faster and cheaper ways to ship goods to their customers.

Given Shopify's tremendous growth and its ongoing efforts to expand its business into new areas, it's no wonder the company is growing so quickly, and attracting favorable attention from investors.

PayPal is one of the leading digital transaction companies, with an array of services and apps that allow users to easily make purchases online. CEO Dan Schulman believes the digital payments market will eventually be worth $100 trillion, and his company's early lead in the space gives it a leg up over its competitors.

But it's not just online payment services that make this stock worth considering. The company is also moving into new digital payment markets as well, such as through its Venmo app. Venmo easily allows users to transfer money to each other for everything from splitting a restaurant bill to paying the babysitter. PayPal is also expanding Venmo's reach beyond P2P by allowing merchants to accept it for mobile payments in their stores. Venmo has more than 40 million active accounts, and in the most recent quarter, processed $21 billion in total payment volume, a 73% year-over-year increase.

With the company's strength in the digital payments market and its efforts to expand in P2P payments, PayPal appears poised to continue benefiting as e-commerce grows.

I think both of these companies will make great long-term investments, but if I had to choose one right now, it would be PayPal. Shopify is growing fast, but PayPal's financials are in better shape. For example, PayPal has a trailing 12-month free cash flow of nearly $6 billion, while Shopify is still in the red. Additionally, PayPal's price-to-sales ratio is only 8.6, while Shopify's is about 31, all of which makes PayPal look like the cheaper stock.

With PayPal's strong financial metrics, its growth in new markets, and its leading position in the digital payment space, the company looks like a great long-term e-commerce payment play for investors.