General Motors (NYSE:GM) said that its sales in China fell 12.2% in the second quarter from a year ago, to 753,926 vehicles. While the Cadillac luxury brand posted strong year-over-year growth, it wasn't enough to offset declines in sales across GM's mass-market offerings.

Year to date through June, GM's sales in China are off 15%. But how will that affect GM's second-quarter profit?

Here's a look at how General Motors' brands fared at retail in China in the second quarter of 2019. 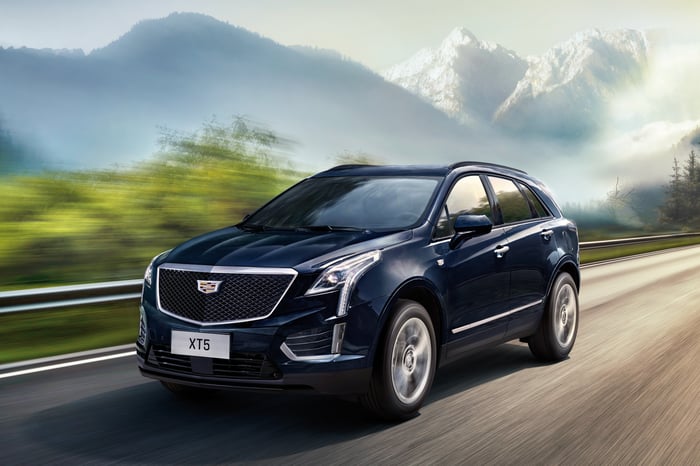 Luxury was the high point of a tough quarter

The overall market in China isn't a friendly one for GM at the moment. China's new-car market has been sluggish for a while now, but the recent bickering over trade between the Trump administration and the Chinese government has hurt American brands' sales in particular, especially in the mass market. GM did outperform Ford Motor Company (NYSE:F), which saw its second-quarter sales in China fall 21.7%, but Japanese rivals Toyota (NYSE:TM) and Honda (NYSE:HMC) both posted year-over-year sales gains.

The luxury market has been somewhat stronger, and GM's Cadillac brand has been able to take advantage with fresh products in the hottest market segments. The compact XT4 crossover SUV, introduced last year, seems almost tailor made to do well in China -- and it helped Cadillac to a substantial second-quarter sales gain, as did a refreshed version of the one-size-up XT5 crossover.

Elsewhere, the news was mixed. The low-cost Baojun brand posted a steep sales decline, but its huge-selling small crossover SUV, the 510, continued to be the sales leader in its market segment. The bread-and-butter Buick and Chevrolet brands posted decent sedan sales, but both are awaiting much-needed new products and lost sales to rivals. (Both are also very American brands, which isn't working to their advantage at the moment.)

GM has a product blitz in the works

GM said earlier in the year that it planned to launch about 20 new or refreshed models in China in 2019, with a focus on larger crossover SUVs and luxury models. A few of those products have already arrived, including a revamped Buick LaCrosse sedan, an upgraded version of its midsize Cadillac XT5 luxury crossover, and a new affordable Chevrolet sedan called the Monza.

The Chevrolet Monza is a new sporty sedan for the Chinese market. It's mechanically related to the now-discontinued Buick Verano sedan. Image source: General Motors.

More new products, including a new version of the popular small Buick Encore crossover and the Chinese-market edition of the all-new "three-row" Cadillac XT6 crossover, will go on sale in the third quarter, GM said.

The takeaway: Expect a weaker profit

The good news for GM shareholders is that the jump in Cadillac sales should help GM's second-quarter profit margin in China. The less-good news is that the overall drop in sales will surely have hurt both revenue and profit. The likely result: Equity income from GM's China joint ventures will probably fall short of the $592 million it brought home in the second quarter of 2018.