Alphabet's (NASDAQ:GOOG) (NASDAQ:GOOGL) Google gets lots of attention for its artificial intelligence (AI) pursuits, mainly because the company is so good at applying AI to a variety of businesses. Consider that Google's core advertising business uses AI to determine which ads to serve online users, and the company's AI assistant, Google Assistant, is one of the best voice-search services available. Or that Waymo, formerly Google's self-driving car project, has driven 11 billion autonomous miles on public roads and even has its own commercial autonomous-vehicle ride-hailing service.

But aside from Google's impressive AI moves, plenty of other players are applying AI to key parts of their businesses, and should benefit from what is projected to be a $15.7 trillion market by 2030. If you're in the market for an AI stock that isn't Alphabet, then check out Microsoft (NASDAQ:MSFT), Baidu (NASDAQ:BIDU), and Amazon (NASDAQ:AMZN). 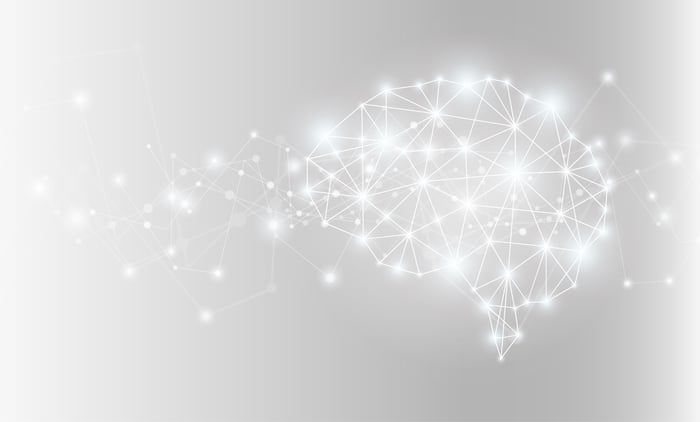 The tech giant is one of the biggest cloud computing companies in the world right now, but it also has its sights set on AI. At the beginning of 2018, Microsoft CEO Satya Nadella said that "AI is the run-time which is going to shape all of what we do."

One of the most important ways Microsoft is benefiting from AI is through its cloud computing business. That's because the lines between AI and cloud computing are beginning to blur. The cloud computing market is expanding as developers and companies look to automate more of their software and find more efficient ways to collect data.

Microsoft is the No. 2 public cloud computing company, behind Amazon, which means that as AI grows, Microsoft's business is likely to grow right along with it. The company has already integrated many AI services into its Azure cloud computing platform, including object recognition and speech translation.

AI integration with Azure is important to note because Microsoft's Azure revenue jumped 73% in the most recent quarter, and the broader cloud computing market will be worth $278 billion by 2021.

It can be easy to assume that most AI companies worth investing in are based in the U.S. But investors shouldn't overlook what some China-based companies, specifically Baidu, are accomplishing.

Baidu uses AI to improve its massive online search tool, but it's also using AI to make self-driving cars a reality. The company's autonomous-vehicle project, Apollo, is an open-source software platform that Baidu says will help put self-driving cars on China's roads by 2021.

While fully self-driving cars are still years away, Baidu has already conducted autonomous-vehicle tests in the U.S. and China, driving more than 1 million autonomous miles across 13 Chinese cities. Baidu also recently partnered with Toyota to bring Apollo to some of the automaker's future autonomous buses, and to research self-driving vehicles together.

Why is self-driving so important to Baidu? First, because China is the largest automotive market in the world, so whatever happens there in transportation is a big deal. Second, the Chinese driverless-car market is poised to become a $500 billion industry about a decade from now.

Last but certainly not least is Amazon, which has a growing list of ways to benefit from AI. First, Amazon CEO Jeff Bezos said in an investor letter two years ago that machine learning, a type of AI, directs everything from product demand forecasting to product search ranks and deal recommendations on its website. What this means is that Amazon sees AI as an integral part of operating nearly every part of its e-commerce business.

Second, the company is benefiting from AI the same way that Microsoft is, through cloud computing. Amazon Web Services (AWS) is the dominant cloud computing platform and has been continually integrating AI services. Developers can, for example, use facial recognition, speech translation, and a host of other AI services through AWS. AI's integration is important for Amazon because right now, AWS is the company's biggest profit generator.

Third, Amazon has been integrating its Alexa smart assistant into a plethora of devices and services over the past few years and making strategic partnerships to bring Alexa to third-party devices. These moves have helped the company become one of the leaders in the connected-home market, allowing it to use AI to learn even more about the things its customers buy and when they buy them.

AI services will slowly take over industries and affect many businesses -- so if you're looking to benefit from this growing trend, there's no shortage of companies betting on it. The important thing to remember is that artificial intelligence may not always take the shape of digital assistants and self-driving cars.

If you look at how companies like Microsoft, Baidu, and Amazon are integrating AI to boost their businesses, you'll see that the growing AI market is more than just hype.