Please ensure Javascript is enabled for purposes of website accessibility
Log In Help Join The Motley Fool
Free Article Join Over 1 Million Premium Members And Get More In-Depth Stock Guidance and Research
By Asit Sharma - Updated Jul 12, 2019 at 7:45AM

Understanding the offset to sluggish volume is key to grasping the company's growth acceleration.

Given the near-5% revenue growth in 2019, consumers must be snapping up PepsiCo products at an accelerated rate this year, correct? Actually, volumes at the global snack and beverages giant have been surprisingly lackluster. Snack volumes, propelled by Frito-Lay North America (FLNA), have registered a 2% increase over the first half of 2018. Beverages, of which the largest driver is PepsiCo Beverages North America (PBNA), have inched up just 1% this year.

If not vibrant volume, then what's behind PepsiCo's current year top-line bounce? Why, those two first cousins of volume so important to CPG companies, of course: pricing and product mix.

If you follow this market in the slightest, you're likely aware that PepsiCo, along with competitors like Coca-Cola and Keurig Dr Pepper, has migrated to smaller beverage packaging sizes over the last couple of years, which results in higher pricing per unit ounce, and as a result, heftier margins. But selling more 7.5 oz. cans is but one force contributing to improved pricing and mix at PepsiCo. On the company's earnings conference call on July 9, CEO Laguarta spelled out several other trends -- within PepsiCo and within the industry -- that are catalyzing the organization's higher sales realization despite nearly flat product volume. 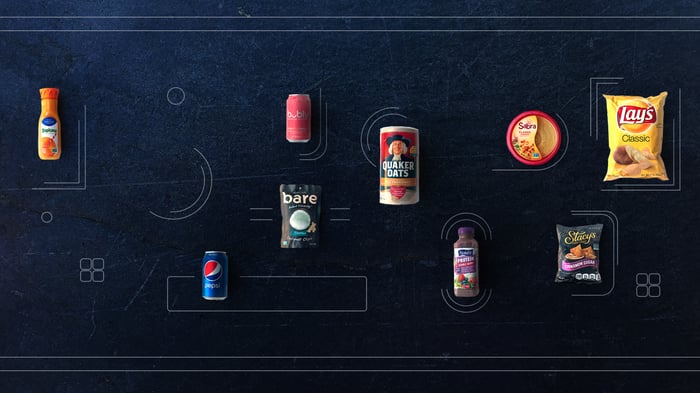 The first trend Laguarta highlighted is rational pricing within the CPG industry. Rising commodity costs are threatening to cut into profits industrywide. Multinational competitors have recently incrementally raised prices in tandem to offset inflation, versus a less rational action of trying to undercut each other on price even as costs climb. The CEO pointed to a uniform effort among CPGs to invest in their brands (i.e. spur product innovation), optimize product distribution, and connect more deeply with customers in order to avoid price promotions and discounting to move products.

Secondly, Laguarta called out the recent consumer trend favoring higher-value products. Such products tend to be associated with "cleaner" ingredient labels, and benefit from a perception of quality around natural and organic components. But higher-value products also include items in the "core indulgent" snack wave. These not-as-healthy products illuminate how attuned consumers still are to packaged comfort food. Whether healthy or indulgent, higher value translates into better pricing leverage.

Third, PepsiCo is seeing an uptick in spending in the convenience channel. Laguarta observed that convenience store customers tend to be less price sensitive than other customers. As a legacy of Laguarta's predecessor, recently retired CEO Indra Nooyi, PepsiCo specializes in cross-selling snacks and beverages in the convenience channel. Walk into a convenience store with a Doritos display front and center, and you'll nearly always see a stack of Mountain Dew or Pepsi beverages stacked within arm's reach.

Finally, PepsiCo is prioritizing more profitable sales over volume by seeking to anticipate the when and where of customer impulse, and attempting to be present in whatever channel the consumer prefers, with the ideal product ready for consumption. Laguarta explained this effort as follows during the earnings call:

"[We're] trying to understand the different occasions the consumer is going into our categories and maximize, obviously, the opportunities for revenue in each one of those occasions. We're investing a lot in net revenue management across the company. And that's translating into, I would say, better mix management, channel management, [and] transaction per unit management."

The CEO did take some time on the call to discuss the movement toward smaller packaging in beverages and snacks. In fact, PepsiCo is attempting to expand capacity for a range of high-demand, smaller-pack items, and Laguarta mentioned that the company is experiencing some production bottlenecks as it does so -- likely a temporary constraint. But PepsiCo's revenue elasticity rests on numerous additional factors that are propelling lucrative sales, despite lack of movement on the volume side.