Here are three intriguing value stock ideas for investors to mull over.

Whether you believe picking hidden-gem value stocks is an art, a science, or a little of both, most investors are compelled by the strategy. Essentially, value stocks are low-risk, high-reward scenarios, as negativity is priced into the stock, and its potential to rebound can provide staggering returns. On the flip side, sometimes stocks are undervalued for a reason, and trying to buy shares could be akin to catching a falling knife, as the saying goes. Because it's difficult to pick the right value stock, three Motley Fool contributors have ideas for you to consider: Alibaba Group (BABA -1.13%), Ford Motor Company (F 3.89%), and Healthcare Services Group (HCSG 1.90%).

Jeremy Bowman (Alibaba Group): There's more to value in the stock market than a low P/E ratio, and one area that investors have overlooked over the last year is China, as concerns about the U.S.-China trade war and a slowing Chinese economy have caused Chinese stocks to trade at a discount.

However, plenty of Chinese companies are still putting up impressive growth numbers, among them Alibaba, the Chinese tech giant that's best known for its e-commerce marketplace.

In its most recent earnings report, the company posted revenue growth of 51% to $13.9 billion, and a 50% increase in adjusted earnings per share to $1.28, or $2.99 billion in adjusted net income. Gross merchandise volume, or the total value of retail goods sold on its platforms, in the fiscal year ended in March rose 19% to $853 billion.

The company is also making aggressive moves into the cloud, where it showed off 76% revenue growth to $1.15 billion, and acquisitions in logistics and delivery, including a partnership with Starbucks.

Alibaba Executive Vice Chairman Joe Tsai directly addressed the tariff threats in the company's May earnings call, saying that Alibaba stands on the right side of all the trade-related issues, as China is already transitioning away from manufacturing to a consumer-based economy and Alibaba would benefit from tighter intellectual property laws and a crackdown on counterfeits.

For investors willing to take on any potential China risk, they can scoop up a stock trading at a forward P/E of 24.7 -- only slightly higher than the market average of 22.3 -- that just grew its top and bottom lines by 50%. It's hard to beat a value like that.

Daniel Miller (Ford Motor Company): I know, I know -- when looking for value stocks to buy right now, most people don't want anything to do with Detroit automakers. And between a plateauing North America automotive market, uncertainty around tariffs, and a highly competitive industry in general, Ford as a top value stock to buy right now is a tough sell for investors. But, bear with me, Ford Motor Company is trading at a paltry valuation, boasts a near-6% dividend yield, and has made some major product improvements.

Let's start with the major product improvements. It was a little over a decade ago when Ford, among other Detroit automakers, was known for poor-quality vehicles. While that stigma partially remains, the truth is Ford is making far better vehicles and the J.D. Power 2019 Initial Quality Study (IQS) proves that. Essentially, the study measures the number of problems experienced per 100 vehicles during the first 90 days of ownership, with a lower score equating to higher quality. According to the study, this is the first year without an industrywide improvement since 2014, but it was the first time Ford and Lincoln brands both placed in the top five -- suggesting that Ford continues to improve its vehicle quality as some of the industry rests on its laurels. 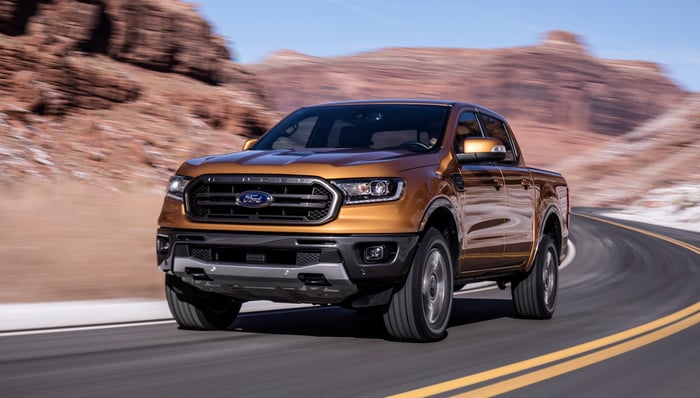 As Ford continues to produce higher-quality vehicles, the company is also improving its business model. Look at the company's Europe operations as an example: It's focused on restructuring for profitability and efficiency with a concentration on new electric vehicles and, perhaps more importantly, SUVs. It's on pace to significantly improve its full-year 2019 Europe results, which would be a huge step for its overall turnaround and restructuring plan.

Sure, Ford faces plenty of challenges with a slowing North American market and its plunging sales in China, not to mention the uncertainty caused by tariffs. However, some negativity is already priced in as the company trades at a paltry eight times forward consensus earnings and boasts a juicy 6% dividend yield, which management claims to be safe from cuts. If you're a long-term investor looking for value or income, and can handle the cyclical auto market, Ford is a value dividend stock to buy right now.

A turnaround in progress

Brian Feroldi (Healthcare Services Group): Healthcare Services Group is normally a sleepy stock to follow. The company provides housekeeping and nutritional services to healthcare facilities in the U.S. Since the demand for its services is very stable, this company usually cranks out predictable profit growth. Management has a long history of using its financial resilience to reward investors with an ever-growing dividend payment.

However, this stable business has put investors through a lot of uncertainty over the last year. That's because a few of Healthcare Services' key customers experienced financial hardship and were unable to pay their bills on time. The company took a few charges and changed up its business practices in response because it was unsure if it would ever be able to collect on what it was owed.

The transition has put the brakes on the company's growth rate and raised new questions about its business model. Wall Street has responded to the uncertainty by pushing shares down to a 52-week low.

I think the situation is giving investors a great chance to get in. The demand for the company's services isn't going anywhere and its fast-growing nutrition business should help its earnings trajectory to recover in time. Analysts believe that the company's profits will grow in excess of 7% annually over the next five years, which I think is a completely achievable figure.

Meanwhile, the lowered share price has pushed up the dividend yield to a tempting 2.6% and has lowered its forward P/E ratio to just 19. Those are numbers that any value or income investor should find attractive.