It's a question that has been on a lot of investors' minds recently. Ford's dividend yield is around 6%, a level that generally suggests that investors think a dividend cut is on the way. And at least at first glance, Ford's dismal second-quarter earnings report and reduced full-year guidance suggest that some belt-tightening might be necessary -- soon.

Ford CFO Bob Shanks had said back in 2016 that the company expected to be able to maintain its current quarterly dividend payment "through the cycle," meaning even through a moderate recession. But back then, Ford still expected profits to be strong through 2018.

I arranged a call with Shanks to ask him: Is that guidance still operative? 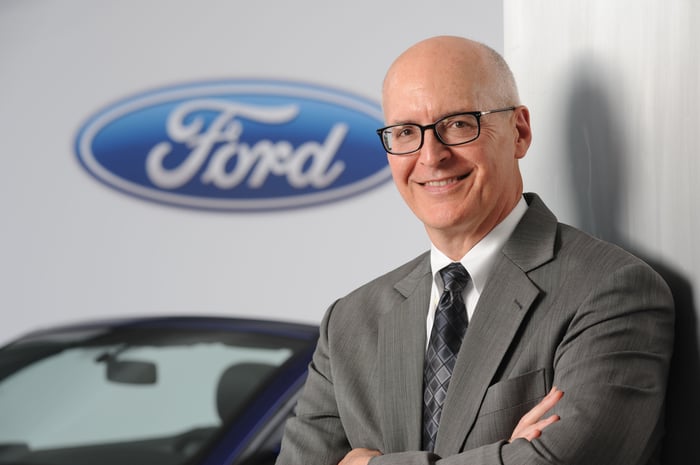 Ford's CFO: Sustaining the dividend is an important part of our strategy

"It's extremely operative," Shanks told me earlier this week. "It's an important foundation of our entire strategy around the balance sheet, around shareholder distributions and the way in which we provide them. It's also about the consistency that we hope to provide, and to demonstrate through -- whenever the next downturn is -- around the regular dividend."

Ford's plan, which dates back to when Alan Mulally was CEO, has been to demonstrate to investors that a recession isn't an existential threat. That's why Ford has long maintained a fat cash hoard ($25.2 billion as of June 30). It's intended to sustain new-product development and other expenses -- including the dividend -- when sales and profits fall during a recession.

Analysts have recently challenged that idea. In a note last week, Berenberg analyst Alexander Haissl argued that Ford will soon have to cut its dividend because its income from China has greatly diminished -- and it isn't generating enough cash from other parts of its business to fund the roughly $2.4 billion per year it pays in regular dividends right now. A few other Wall Street analysts have recently made similar arguments.

Shanks told me that he thinks those analysts' concerns about Ford's cash flow have missed something important: Yes, China income is down -- but Ford Credit is about to become a cash-flow monster.

The cash-flow piece that analysts are missing

Until recently, most of the cash generated by Ford Credit was reinvested in its business, as Ford worked to increase its total "managed receivables," or the amount it has in outstanding loans and leases at any given time. "We've been taking most of their cash generation over the last number of years and reinvesting it in a larger equity base so it could support ever greater levels of receivables," Shanks said.

Those receivables are supported by equity of about $15 billion, Shanks said, and Ford targets an 11% return on that equity annually. (It was 15% in the first half of 2018.) He also said:

Shanks wanted to make clear that he's only talking about the "regular" dividend, the $0.15 per share that Ford pays every quarter. In recent years, Ford also has paid a supplemental dividend in the first quarter as a way to return additional strong profits to shareholders. It has chosen to pay supplemental dividends rather than raising the regular dividend for exactly the reason outlined above: It wanted to keep the regular dividend at a level it could sustain through the business cycle.

As of right now, at least, Ford still intends to maintain its $0.15 quarterly dividend, even if the economy slips into recession. Yes, the reduction in Ford's income from its Chinese joint ventures is a concern, though Ford expects that to improve after this year. But Shanks argued -- persuasively, to this Fool's thinking -- that the cash flow from Ford Credit will help Ford continue to fund its strong quarterly dividend without it becoming an unreasonable burden.

Long story short: Ford's current quarterly dividend still is sustainable, even into a recession -- and Ford absolutely plans to sustain it unless things get dire. If you've held off buying Ford at recent prices because of concerns about the sustainability of the dividend, I think you can set those concerns aside for the time being.