The Blue Oval beat analyst estimates with a $1.9 billion net profit for the fourth quarter, giving it a record $7.4 billion in net income for the full year.

The new-for-2015 Ford F-150 made a big contribution to the company's bottom line for the year. But Ford's latest SUVs helped, too. Image source: Ford Motor Company.

Ford Motor Company (NYSE: F) said on Thursday that its net income increased fivefold in 2015 to $7.4 billion, including a $1.9 billion net profit for the fourth quarter.

A look under the Blue Oval's hood
It was an outstanding quarter for Ford nearly across the board. In North America, Ford earned $2.03 billion before taxes. As CEO Mark Fields emphasized during the company's conference call, Ford has been reaping the benefits of the big new-product push that dented results in 2014. The new-for-2015 F-150 has been a big success, and Ford's Edge and Explorer SUVs have been posting big sales numbers for months now.

Those new products have helped margins. Ford's average transaction prices in North America were up $2,200 in 2015 versus 2014, Fields noted. Ford's operating margin in North America was 8.2% in the fourth quarter, 10.2% for the full year. 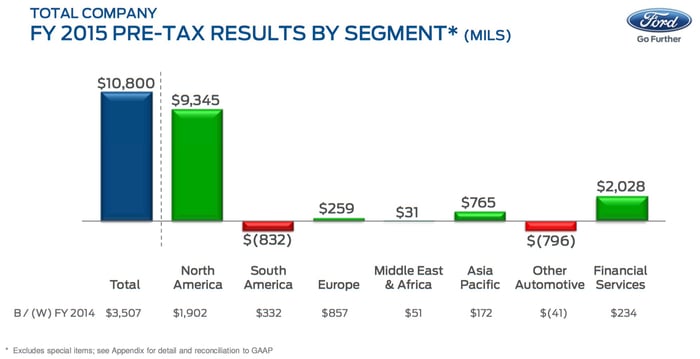 Ford's recovery in Europe has been gathering steam as well. Ford earned $131 million in Europe before taxes in the fourth quarter, and $259 million for the full year -- its first profitable year in Europe since 2011. The story is simple and (for once) good: Markets are recovering, and Ford has strong new products in its European lineup that are winning customers. Ford's European market share was 7.6% in the fourth quarter, up from 7% in the year-ago period.

Ford's Asia Pacific unit also did well, with a $444 million fourth-quarter gain helping it to a $765 million pre-tax profit for the full year. Ford has held its ground in China's slowing market, while managing to increase its pricing thanks to some hot new models. CFO Bob Shanks said the new Edge SUV, which is available in a three-row version in China, has been an especially hot seller and a big factor in the unit's good results.

A unique-to-China three-row version of the new Ford Edge SUV has been a hot seller since its launch last year, helping Ford to strong profits despite a slowdown in the country. Image source: Ford Motor Company.

But not all of the news was bright. Economic conditions in South America continue to be very challenging, particularly in the key markets of Brazil and Argentina. Ford lost $187 million in the region in the fourth quarter, as industrywide new-vehicle sales were down sharply. But Shanks emphasized that the management team in South America made the most of the hand they were dealt: Net pricing was up in the quarter, and costs were well-contained.

Ford Credit, the company's in-house financing arm, earned $556 million for the quarter and $2.01 billion for the full year. That's up a bit from 2014 results. Credit quality continues to be strong, and delinquencies were actually down very slightly from a year ago. 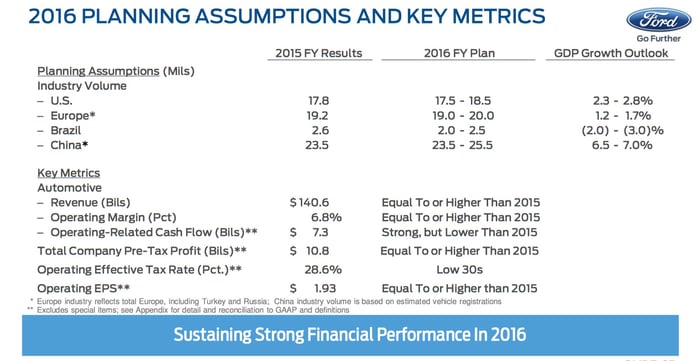 Ford expects incremental improvements in most of its business measures in 2016. Image source: Ford Motor Company.

For 2016, Ford expects to match or beat its 2015 revenue, margin, pre-tax profit, and earnings per share. It expects strong operating-related cash flow, but not quite as high as 2015's, which was boosted by a "refilling" of Ford's coffers after the expenses of the F-150 launch in 2014.

It expects results in North America to be about equal to 2015's strong profit, with better results likely in Europe and Asia -- but South America will likely post a higher full-year loss, Shanks said.

John Rosevear owns shares of Ford. The Motley Fool recommends Ford. We Fools may not all hold the same opinions, but we all believe that considering a diverse range of insights makes us better investors. The Motley Fool has a disclosure policy.