The automaker's CFO said the Blue Oval has a plan to continue its dividend payments through the economic cycle -- even through a major downturn.

Investors in Ford Motor Company (F 0.15%) have been drawn to the stock by several factors. The Blue Oval's steady profitability, battle-tested management team, strong product line, and careful capital allocation are all good selling points for the stock.

But a lot of those investors will also point to Ford's solid dividend. Ford's dividend yield is hovering right around 4.7%. That's an exceptionally strong payout, but it reflects some concern among investors about a potential cyclical decline in the U.S. new-car market -- and the possibility that Ford might cut the dividend if its profits are squeezed. 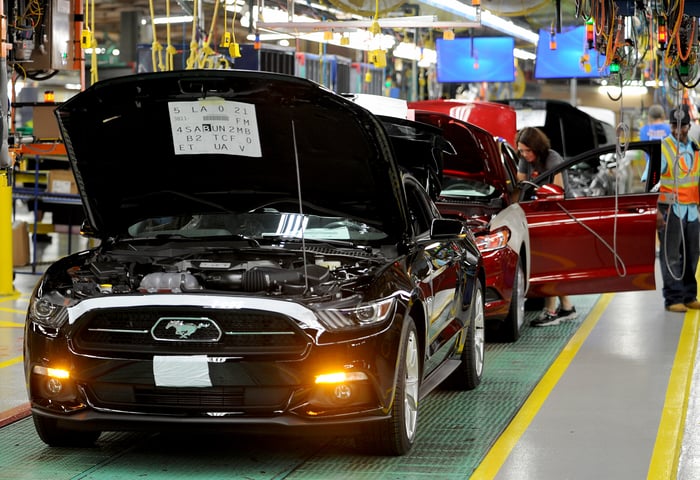 Sooner or later, a recession will slow Ford's factories and squeeze its profits. But Ford has a plan to sustain its dividend payments when that happens. Image source: Ford Motor Company.

What Ford's CFO said about sustaining its dividend 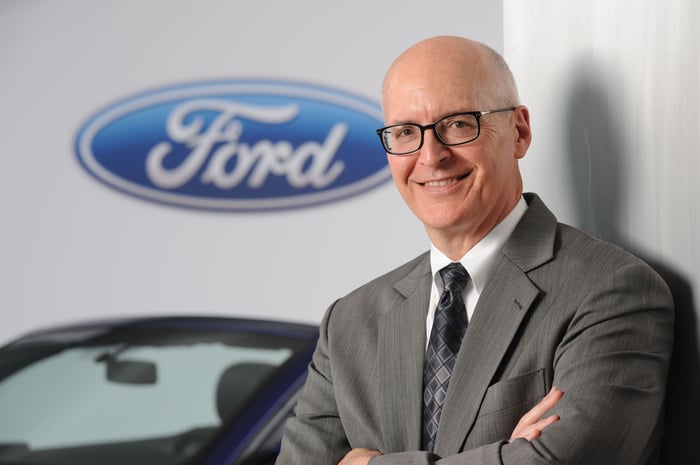 What does that mean? Ford's recent practice has been to keep its regular quarterly dividend payments steady, while paying a supplemental dividend from time to time as its cash flow allows. Shanks is saying that Ford plans to continue that practice "through the business cycle" -- or put another way, even if the market turns down, as long as Ford's cash reserve remains

Why that assurance is important to Ford investors

Autos are a cyclical business: Sales and profits rise and fall with economic cycles. Consumers and businesses buy new cars and trucks when they're feeling good about their near-term economic prospects. When times get tough, those purchases are postponed.

For automakers, that cycle has always been difficult to manage. The challenge is that the business of manufacturing cars has very high fixed costs: Factories and tooling represent huge investments that are amortized over the life of a given product. As production and sales of that product slow, a larger percentage of the revenue it generates is counted as costs, not profits. That squeezes the automaker's bottom line.

Historically, during downturns, the Detroit automakers have seen profits narrow and have often swung to losses. That's why Ford's stock price is lagging (and why its dividend yield is so high right now): In the U.S., Ford's most important market in terms of profits, there are good reasons to believe that the current auto sales cycle has peaked.

That has investors worried. But there's some good news: Unless the next recession is extremely severe, Ford's much-improved cost structure should keep it from posting losses. Even if it does swing to a loss for a few quarters, it has an ample cash reserve (over $20 billion) to sustain its heavy investments in new products until sales recover. 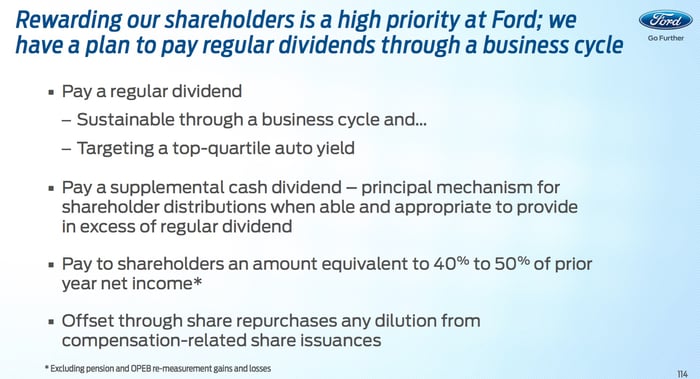 This slide from Ford's Investor Day presentation sums up its thinking about its dividend. Image source: Ford Motor Company.

But clearly, either way, Ford's profits will shrink during the next downturn. What Ford is saying now is that it will prioritize its regular dividend payments even when sales and profits fall with the cycle.

Shanks' statement echoed a similar one made in July by rival General Motors' (GM 0.63%) CFO Chuck Stevens. Stevens said that GM is planning to continue its dividend payments through the next downturn, as long as its cash position remains strong.

That's the gist of Shanks' statement as well. While a severe recession could obviously force a change in plans, both are important statements about Ford's and GM's priorities, and both are good news for investors.