Investors are in good shape these days. The major exchanges closed out the trading week hitting all-time highs, and a whopping 755 exchange-listed stocks hit their highest prices in more than a year.

But not every stock is at the party. Fiverr (NYSE:FVRR), Potbelly (NASDAQ:PBPB), and Sogou (NYSE:SOGO) all hit fresh lows this past week. Fiverr is a recent IPO that's cooled off since its initial pop. Potbelly is the once high-flying sandwich maker that's struggling to compete. Sogou is a Chinese search engine provider that's falling on hard times. Let's dig into what's holding back these three stocks hitting all-time lows even as the rest of their peers are generally racing higher. 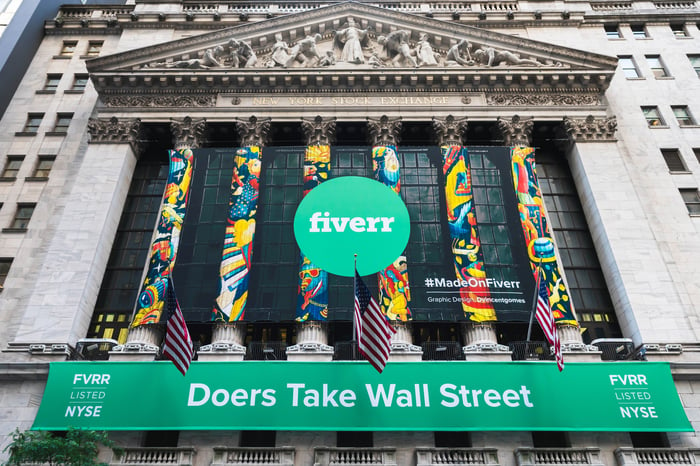 The online marketplace for digital odd jobs was on fire when it went public last month, soaring 90% on its first day of trading. The stock more than doubled from its IPO price early in its second day on the market, but it was all downhill form there. Backed by solid top-line growth -- revenue rose 45% last year and a hearty 42% in this year's first quarter -- it was easy to see why the market initially fell in love with Fiverr as a gig-economy play. The love affair didn't last.

Shares of Fiverr gave up nearly all of their initial gains, and today the stock trades barely above its $21 IPO price. Several analysts chimed in with bullish initiations earlier this week, but they were the underwriters that took Fiverr public four weeks ago. Investors don't put a lot of faith in those biased market calls.

The restaurant business can be a cutthroat industry, and Potbelly's feeling the pain. Comps declined 4.7% in its latest quarter, matching its revenue dip. Potbelly's adjusted loss was also larger than the analysts were expecting.

Potbelly hit the market in 2013, when fast casual was a booming investing theme. It couldn't open stores fast enough. These days it's closing more stores than it's opening.

It's been nearly two years since Sogou was spun off as a publicly traded company, and it's been a rough road for investors in China's second largest search-engine provider. The stock hit another all-time low on Thursday, and it's now surrendered more than 70% since hitting the market at $13.

China's much larger search engine leader, Baidu, is also out of favor, recently trading at its lowest level in nearly six years. China's economy is slowing, and that's weighing on how advertisers are drumming up online leads. Sogou hit the market posting double-digit percentage growth, but it managed to grow its top line by a mere 2% in its latest quarter. The gain would've been 8% on a constant currency basis, but growth investors already nervous about buying into Chinese growth stocks are staying away.

J.P. Morgan analyst Alex Yao downgraded Sogou to "underweight" late last month, unable to justify the market's general sentiment that China's online advertising market will recover in the second half of this year. He slashed his price target on Sogou from $5.50 to $3.50, suggesting there are still more new lows to be had here.