Amazon.com (NASDAQ:AMZN) and Walmart (NYSE:WMT) dominate the retail market in America and, increasingly, many other areas of the world. As they've risen to power, they've created fortunes for investors along the way.

But which of their stocks is the better buy today? 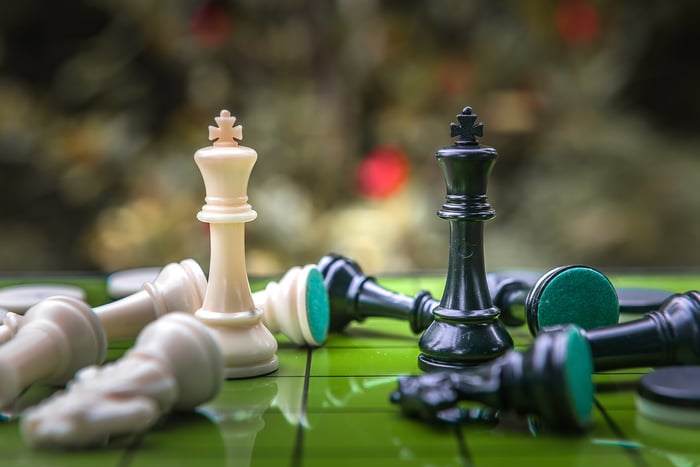 Walmart's more than 11,000 stores in 27 countries serve as not just as the face of the company's traditional retail operations, but also as valuable hubs for e-commerce order fulfillment and delivery. Walmart is investing aggressively to transition into an omnichannel retailer that seamlessly blends its in-store and online operations. And in the U.S., where roughly 90% of the population lives within 10 miles of one of its locations, Walmart's massive store base provides a powerful competitive advantage that other traditional retailers can't match.

Amazon, however, is able to circumvent its lack of stores with a network of distribution centers strategically placed around the world. These high-tech warehouses allow the e-commerce juggernaut to offer one-day shipping on more than 10 million items. So while Walmart's stores provide a high level of convenience for shoppers, Amazon is largely able to offset this with its free-shipping options.

Moreover, while Walmart's retail operations account for nearly the entirety of its revenue, Amazon is a far more diverse business. Amazon Web Services is the world's leading cloud-computing infrastructure service -- one that some analysts believe could be worth a whopping $350 billion by 2022. Amazon also has a fast-growing digital advertising business that's on track to generate $22 billion in annual sales by 2022. These businesses provide sizable profits that Amazon can use to further strengthen and expand its e-commerce operations.

All told, with several powerful businesses fueling its growth, Amazon is in a stronger competitive position than Walmart.

Let's now review how Amazon and Walmart stack up in regards to some key financial metrics.

Walmart generates more than twice as much revenue as Amazon and significantly more operating profits. Amazon, however, produced greater operating and free cash flow over the past year. Given the online juggernaut also has a stronger balance sheet -- with nearly $14 billion in net cash versus $44 billion in net debt for Walmart -- Amazon has the edge here.

When it comes to growth, this better buy battle is particularly one-sided. Amazon's revenue and operating profits have expanded at vastly superior rates than those of Walmart in recent years. 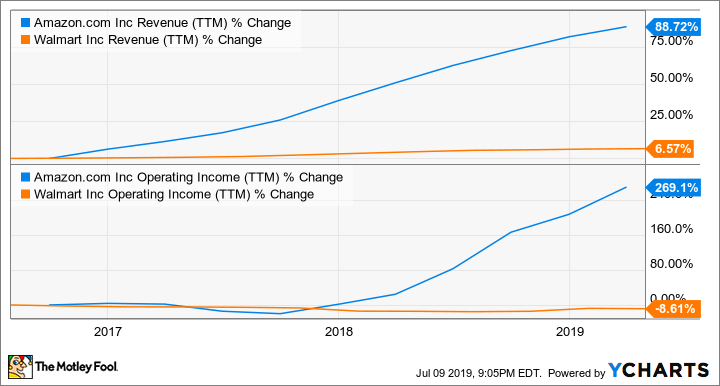 Wall Street expects these trends to continue. Amazon's revenue is projected to increase roughly 18% in both 2019 and 2020. Its earnings per share, meanwhile, are expected to rise an even more impressive 33% annually over the next five years, fueled by the strong growth of AWS and Amazon's digital ads business.

Clearly, Amazon has a significant advantage in terms of expected revenue and profit growth in the coming years.

Lastly, let's see how these retail titans compare in regards to some common stock valuation metrics.