Investors are likely to look past middling revenue growth as they assess prospects for the back half of 2019.

U.S. rail line Union Pacific ( UNP 0.15% ) will share its third-quarter financial report with shareholders on July 18, before the markets open for trading. Three key themes will largely determine the reaction of investors to the company's results: the state of the company's volume, the effect of import activities on the quarter, and progress on Union Pacific's efficiency program.

Let's briefly review each of these themes in preparation for the filing.

1. Volume and management's perspective on the second half of the year

As I discussed in an earnings preview of competitor CSX, which reports its own earnings on July 16, U.S. rail traffic has dipped in the first two business quarters of 2019 against the prior year, because of a slowing pace of manufacturing activity and a tepid housing market. Based on Union Pacific's weekly traffic reports, investors already have raw data on hand for the second quarter, and the behemoth rail leader hasn't proved to be an exception to the rule.

It's unlikely that Union Pacific was able to exercise enough pricing power to turn the slighter volume into a vibrant revenue increase over the past three months. As investors are already aware of curbed traffic, more attention will be paid to management's reading of the volume tea leaves for the third and fourth quarter. 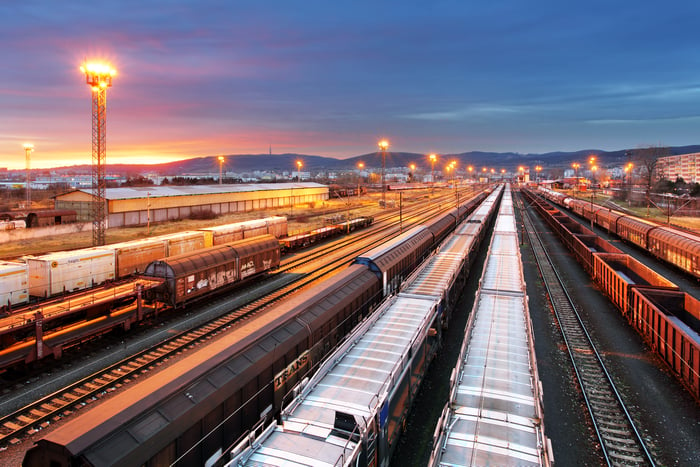 Speaking of tea leaves, one very significant leaf that investors will expect management to parse relates to the ongoing trade dispute between the U.S. and China. In June, Union Pacific CEO Lance Fritz met with President Trump to voice his concern that a second round of 25% tariffs on over $300 billion worth of imported goods, on top of 25% tariffs already imposed on some $350 billion in imports, would significantly harm the railroad's results.

While the administration has temporarily pulled back on this threatened round of tariffs, it remains an option as the U.S. and China continue to negotiate their trade differences. Investors will look for management to provide some sort of ballpark quantification of future earnings impacts should the additional tariffs get enacted. They'll also seek clarity from Union Pacific executives in the upcoming earnings conference call on the effect of ongoing trade uncertainty on both second quarter business and the remainder of the 2019 year.

Last year, Union Pacific announced its "Unified Plan 2020," in which it vowed to utilize principles of Precision Scheduled Railroading (PSR) to improve its operating performance. CSX has employed, with much success, a rather strict form of this framework, which focuses on extreme efficiency in the use of railroad assets, and competitor Kansas City Southern has also recently implemented PSR initiatives to boost productivity.

As of last quarter, Union Pacific hadn't realized significant improvement from its PSR efforts. The company's operating ratio, a standard measure of rail efficiency found by dividing total expenses by total revenue, declined by a modest single percentage point in the second quarter over the prior year, to 63.6%. (Lower readings are better.)

However, the company has now instituted PSR across most of its network and is in position to realize a greater impact from its groundwork. Union Pacific is shooting for an operating ratio of 61% or better for the entire 2019 year; thus, it's clear that management is expecting several percentage points of improvement in the second through fourth quarters.

Since Union Pacific doesn't issue any quantitative earnings guidance, this yearlong target carries all the more weight. Progress toward materially lowering the railroad's operating ratio in the second quarter could counterbalance lower volumes and provide a catalyst for investors to continue to support these shares -- which have already jumped 27% on a total return basis so far this year.