Revenue momentum at CSX is likely to stall a bit this quarter -- keep your eyes on these four items that will inform investors' reaction to its earnings release.

U.S. rail freight leader CSX (CSX -0.51%) reports second-quarter 2019 earnings on Tuesday, July 16, after the markets wrap for trading. The railroad's focus on operating efficiency within generally favorable business conditions has nudged its stock price higher by 23% year to date. Will CSX continue to inspire investors with its imminent scorecard? Let's review four items below that will determine shareholders' reception to the filing next week.

In last year's second quarter, CSX realized tangible, breakthrough results from its implementation of precision scheduled railroading, or PSR. The company enjoyed a leap in its operating ratio, that is, total expenses divided by total revenue, a key measure of railroad efficiency. A lower operating ratio denotes higher efficiency. CSX booked an all-time record quarterly operating ratio of 58.6% in Q2 2018, an improvement of an amazing 880 basis points against the prior-year quarter.

This quarter, CSX will lap last year's progress and face a very tough comparison vis-a-vis operating ratio. In its last sequential quarter (the first quarter of 2019), CSX achieved an operating ratio of 59.5%. Progress from both the first quarter of this year and the comparable 2018 quarter will probably be incremental. It's unlikely that the company will jolt its stock price from another burst of productivity. 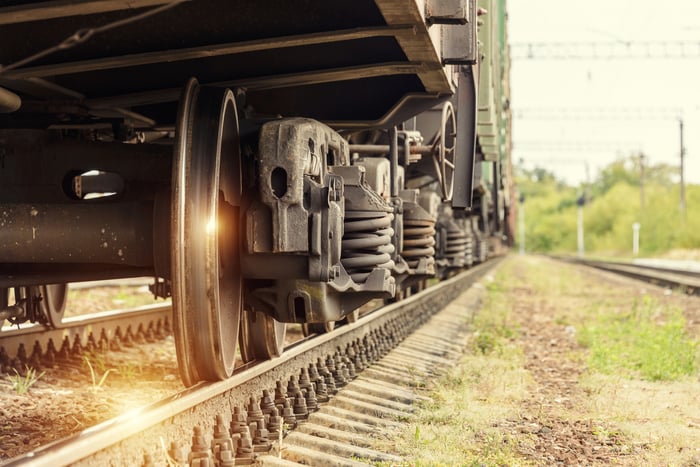 The effect of traffic declines

Rail investors are always keen to study railroad volume, and this quarter, they'll look to management for guidance on what appears to be a weakening traffic trend. Raw data, which CSX provides weekly, indicates that in the second quarter of 2019, its total traffic declined by 4% year over year to 1.58 million carloads.

According to the Association of American Railroads (AAR), June marked the fifth monthly year-over-year decline in U.S. rail carloads and intermodal traffic. AAR has cited slowing manufacturing output and a weak housing market as two of the primary factors bearing on domestic traffic as the year wears on. Shareholders will look for CSX's management to provide an outlook for the state of volume in the back half of the year, and the complexion of that guidance will likely bear on share price next week.

As I discussed last quarter, CSX was able to offset rather flat volume in that period with broad-based pricing gains in its merchandise shipment categories (i.e., agricultural, automotive, chemicals, equipment, fertilizers, forest products, minerals, and metals). At least in the first three months of the year, the company enjoyed enough customer demand to leverage its top line with higher pricing.

Given what we already know about traffic trends, such pricing power may not have held up in the second quarter of 2019. If this is the case, it's doubtful that CSX will match the year-over-year revenue expansion of nearly 5% that it booked in the first quarter. Again, investors may not penalize CSX too harshly for such an outcome -- much will ride on management's forecasts on pricing in relation to volume for the second half of 2019.

Expense control will play a key role in earnings

As part of CSX's focus on PSR, it's optimized a number of operational metrics over the last several quarters, including reducing average car dwell time at terminals, and increasing average train velocity. Management has also controlled variable costs, and, specifically, demonstrated a talent for taking excess cars and locomotives out of service to better match resources to immediate capacity needs.

Such initiatives show up as reduced operational expense on the income statement. In what's likely to be a slower growth quarter for CSX, evidence of cost management, including astute implementation of fuel surcharges and a continuing tight rein on labor expense, may positively impact the trajectory of the "CSX" symbol -- if previous discipline has continued over the last three months. Railroads that can improve earnings through sound logistics and overhead management while business is slow tend to be favored by investors in industrial stocks. We'll get a glimpse into CSX's cost prowess -- and positive or negative ramifications -- next week when it files earnings on Tuesday.