For years, European space companies have been complaining: SpaceX prices are impossible to beat!

In fact, new Falcon 9 rocket rides retail for just $62 million (rides on reused rockets are reportedly selling for as little as $50 million). That's less than half the cost of an Ariane 5 from Airbus (OTC:EADSY) subsidiary Arianespace, leading Ariane CEO Alain Charmeau to warn that SpaceX is going to "kick Europe out of space" unless Europe does something about this -- and soon.

So it's probably good news for Airbus and Ariane that Europe has decided it will finally do something. 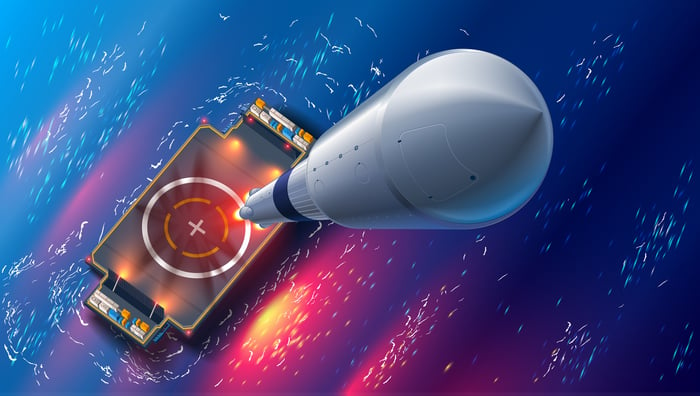 Specifically, the European Commission announced last month that it's going to ante up some seed capital to begin researching a pair of "reusable upright-landing" rockets that could theoretically, eventually, compete with SpaceX in the reusable rockets market.

The EC will pay 3 million euros ($3.4 million) to the German Aerospace Center and five privately held companies -- MT Aerospace from Germany, Amorim Cork Composites from Portugal, Spain's  Elecnor Deimos; and CFS Engineering and Almatech, both of Switzerland. Working together, these six organizations will develop technologies for reusable rockets that will land upright after a successful mission, just like SpaceX rockets.

The EC calls its latest project RETALT (for RETro propulsion Assisted Landing Technologies), and it's giving the team three years to accomplish its mission. When complete, the RETALT consortium aims to have two rocket models to work with: a two-stage version similar to SpaceX's Falcon 9, where only the first stage will be reusable, and a single-stage-to-orbit reusable rocket for delivery of smaller payloads. That one will resemble the rockets being launched today by Rocket Lab -- but reusable.

The chances of European space success

Will RETALT succeed? I certainly hope it does. But with the small size of the EC's investment, the lack of involvement by marquee space-tech companies like Thales or Ariane, and the fact that the EC seems to be designing its new rocket by committee, I worry that this project has little prospect of producing paradigm-shifting results for Europe's space industry.

Consider the obstacles in the context of SpaceX, the company Europe is trying to emulate. SpaceX has been testing vertical landing of rockets since at least as far back as 2012, beginning with its Grasshopper test bed rocket. Not only does this mean SpaceX has at least a seven-year head start on Ariane, it also suggests that the three years of funding the EC is promising its consortium may not be enough to get Europe's space industry anywhere near the level of reusable-rocket proficiency that SpaceX already possesses.

And speaking of funding, SpaceX spent nearly $400 million designing and developing its reusable Falcon 9 rocket, and a further $500 million to develop Falcon Heavy. This suggests Europe's $3.4 million may only be a down payment on what's necessary -- it may need to scale up that investment by a few hundred times in order to reach the point that SpaceX is at already.

And by that time, of course, it's likely SpaceX's capabilities will be even more advanced.

What does this mean for Ariane 6 -- and for the United Launch Alliance?

In the meantime, of course, Airbus and Ariane are continuing with their efforts to lower the cost of more mundane expendable rockets -- the single-use kind of rockets that were standard before SpaceX arrived.

At last report, Ariane hoped to have its new Ariane 6 expendable rocket ready to fly by 2020 -- and hoped to price it at $77 million per flight. That still won't be cheap enough to compete with SpaceX now that it's offering flight-proven Falcon 9 rides for just $50 million a pop. But it should be cheap enough to give the United Launch Alliance (ULA) -- the Boeing (NYSE:BA) and Lockheed Martin (NYSE:LMT) joint venture that is Ariane's other primary rival -- another thing to worry about.

And this, I suspect, may be the biggest implication of Europe's new interest in reusable rocketry: If RETALT succeeds and if its technology is adopted by Ariane, ULA could end up in the unenviable position of being the only major Western space company lacking an active program for reusable rocketry.

Boeing and Lockheed won't be able to leave this move unanswered. Combined, the two companies have already spend nearly $500 million on their space businesses, according to data from S&P Global Market Intelligence. And if they want ULA to remain a part of the space race, they may have little choice but to spend a lot more -- and develop a reusable rocket of their own.