The big reveal: Test flights will begin sooner than you think.

At long last, Starship is real.

Elon Musk said so, in a tweet posted Jan. 10: "This is an actual picture, not a rendering."

Starship test flight rocket just finished assembly at the @SpaceX Texas launch site. This is an actual picture, not a rendering. pic.twitter.com/k1HkueoXaz

He added, "It needed to be made real," and clarified that the Starship that SpaceX has just built down in Texas is a prototype built "for suborbital [vertical take-off and landing] tests" to prove that the world's biggest-ever spaceship can both launch from and land back on Earth, just like SpaceX's smaller Falcon 9 and Falcon Heavy rockets.

After those VTOL tests are complete, SpaceX will proceed to build an "orbital version" of the rocketship that will be "taller," with "thicker skins ... & a smoothly curving nose section," according to Musk.

But let's not get ahead of ourselves. What do we know about Starship today? Because that's a pretty good story in and of itself. 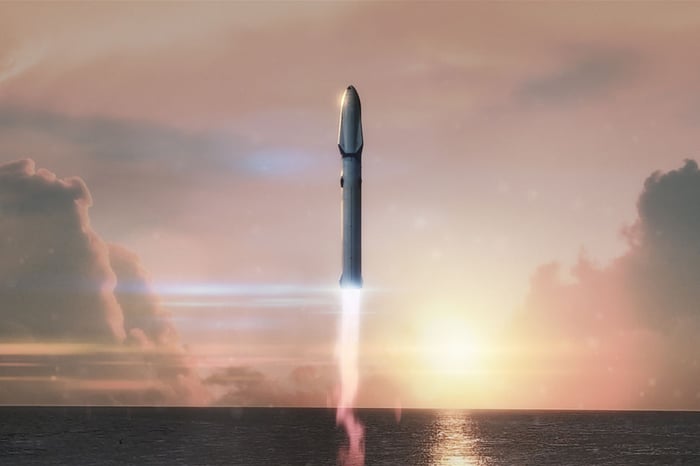 What we know about Starship

Initially expected to be constructed out of carbon fiber, Starship has been redesigned to be constructed of "300 series" stainless steel alloy. Instead of a heat shield to protect the ship when reentering the atmosphere, Starship will cool itself by circulating "residual (cryo) liquid methane" internally. As for the engine, the prototype Starship will fly with three "radically redesigned" Raptor engines to power it. (Seven will be required to power the production version of Starship.)

Musk initially planned to begin "hopper" test flights of Starship -- the upper stage of the two-stage rocketship previously known as "BFR" -- no sooner than late 2019. But those initial plans are changing rapidly. Over the last couple of months, photos have been filtering out of SpaceX's test site in Boca Chica Village, Texas, evidencing rapid prototyping work being done to construct and test the Starship concept -- months ahead of schedule.

Last month, Musk announced that the first test of an abbreviated, 30-foot-wide and 180-foot-tall "suborbital version" of Starship (dubbed "Starhopper") could in fact take place in March or April 2019. Test launches will ascend between 0.3 miles to 3 miles -- then attempt to reland a la SpaceX's reusable Falcon 9. The ambitious development schedule calls for orbital test flights of the "Starship Mk I orbital design" to swiftly follow (launching atop a prototype Super Heavy first stage).

Musk now puts the chances of Starship Mark I reaching orbit by 2020 at "60% [and] rising rapidly."

Time is running out for Boeing, Lockheed Martin -- and NASA's Space Launch System

That's great news for SpaceX -- but potentially very bad news for space stalwarts like Boeing and Lockheed Martin, which along with peers Northrop Grumman and Aerojet Rocketdyne have committed themselves to helping NASA build a gigantic Space Launch System rocket.

Why is it bad news?

Simply put, because time may be running out for SLS. Over budget and behind schedule already, with criticism mounting in Congress, SLS now isn't expected to make its first test flight before mid-2020 -- and maybe not even then.

If SpaceX succeeds in beginning at least suborbital Starhopper testing this year, it will arguably have beaten SLS in at least one race. And if SpaceX succeeds in getting Starship Mark I into orbit next year, and depending on how many additional delays SLS suffers, SpaceX could win the orbital race as well.

If this scenario pans out, SLS will be in a tough position: SpaceX will have a spacecraft capable of carrying a larger payload than the Block 1 SLS. It will carry that payload for a lower price. It will be able to carry payloads multiple times, because it is reusable (SLS is not). Most importantly, SpaceX's Starship would be ready to fly -- while SLS still isn't.

The upshot for space investors

If SpaceX succeeds in racking up all those advantages, it's going to be awfully hard for NASA to make the case to Congress that it should spend the additional $9 billion needed to complete SLS's development, when there's a cheaper, more capable alternative already available.

Granted, this scenario is not yet certain. SpaceX's headlong rush to complete development of Starship ahead of schedule -- and ahead of SLS -- could still run off the rails, thus giving SLS time to catch up. For the time being, however, momentum appears to be on SpaceX's side.