A massive rocket being designed by Boeing (NYSE:BA) to eventually send humans back to the moon and then beyond has been plagued by development issues that have doubled the program's price tag and could further delay an eventual launch, according to a new report by NASA's inspector general.

NASA's Space Launch System, which at 322 feet tall and producing 8.4 million pounds of thrust at liftoff would be the most powerful rocket since the Saturn V, has been plagued with "management, technical and infrastructure issues driven by Boeing's poor performance," according to the inspector general's report. The audit estimates NASA will spend at least $8.9 billion on SLS through 2021, double what was initially planned, due in part to the issues. 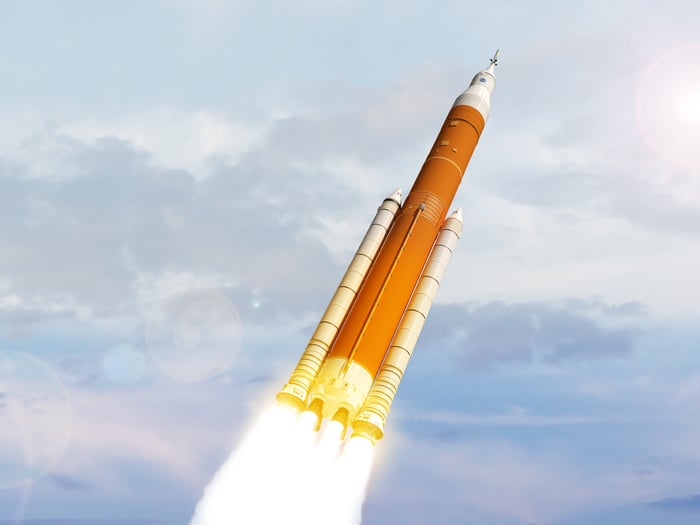 The vehicle likely won't be ready to fly by June 2020, the current target, and the report also questions the sustainability of the final product. While Boeing takes most of the heat in the audit, there are a number of contractors with exposure to the larger program. Its viability could also impact others with similar aspirations, most notably Elon Musk's SpaceX.

A "national investment" in space

NASA in 2012 contracted with Boeing along with Lockheed Martin, Aerojet Rocketdyne, and Orbital ATK (which is now owned by Northrop Grumman) to build the SLS and its related components, with an initial plan to achieve launch readiness by December 2017 and a first crewed mission by mid-2021. While the development deal was massive, the real payoff for contractors could come after the system is in service and generating up to $2.5 billion in revenue per launch.

The audit blamed Boeing for insufficient staffing and improper assembly of factory tools, among other issues.

Both Boeing and NASA emphasized the complexity of the challenge in explaining the cost overruns and delays. NASA official William Gerstenmaier in a statement called the audit "a fair assessment" but said "the design, development, manufacturing, testing, and operations of the system are highly complex and represent a national investment in a long-term commitment to deep space exploration."

Boeing in a statement said, "An unprecedented rocket program has inherent challenges; developing the first unit of a system that will safely carry humans into space, even more so."

But while the audit is new, some of these criticisms are not. The SLS was reportedly a hot topic at a conference held by the influential National Space Society back in June, with some questioning whether the expensive project could be justified.

Other critics have pointed out that the SLS could be obsolete before it is even launched. The rocket Boeing is developing is an expendable launch vehicle, meaning it is designed to be discarded after a single use. That's a massive cost that a number of space start-ups including SpaceX and Jeff Bezos' Blue Origin are trying to eliminate via the development of reusable rockets.

Given the sunk costs of the SLS, coupled with the vast number of contractors and legislative districts exposed to the program, it seems unlikely that Congress will simply abandon the effort. But this report if nothing else provides powerful rocket fuel to SLS critics.

For Boeing, which has enjoyed a series of recent defense wins, the SLS struggles should be less of an embarrassment than the delays to its KC-46 refueling tanker simply because contractors tend to get more of the benefit of the doubt when developing next-generation technologies. Given the SLS work is primarily cost-plus contracts, and not fixed cost, the government, and not the contractor, is on the hook for much of the overage.

And even if the SLS were to be canceled, Boeing could easily weather the lost revenue. The company's entire space and defense business generated less than 25% of total Boeing revenue in 2017, and the defense business's recent wins in competitions for new drones, training aircraft, and helicopters give it ample opportunities for revenue growth even without the big rocket.

But what will become of the SLS? That might depend on the success of some of the rocket's potential rivals. SpaceX's Falcon Heavy rocket, though not as large as the planned SLS, is capable of sending payloads to the Moon at an estimated cost per launch of $150 million, or $90 million if the rocket is reusable. The company's "Big Falcon Rocket" -- which has been announced but not yet built -- is planned to have a larger payload capacity than SLS at a lower price.

Expect NASA to plow ahead for now. But with other options rocketing forward, it's far from certain that the SLS will ever put an astronaut on the moon.