With every passing day, NASA gets closer and closer to completing its Space Launch System. Described as the most powerful rocket since the Saturn V that sent American astronauts to the Moon, SLS will tower 322 feet on its launch pad and produce 8.4 million pounds of thrust at liftoff.

SLS is also powering the profits of America's biggest space companies. Boeing (NYSE:BA), Lockheed Martin (NYSE:LMT), Aerojet Rocketdyne, and Orbital ATK (now owned by Northrop Grumman) are just a few of the companies profiting from SLS's $35 billion development budget. And once SLS is built, it could be even more lucrative for its builders and operators, generating revenue of as much as $1 billion -- some estimates now say $1.5 billion to $2.5 billion  -- per launch. 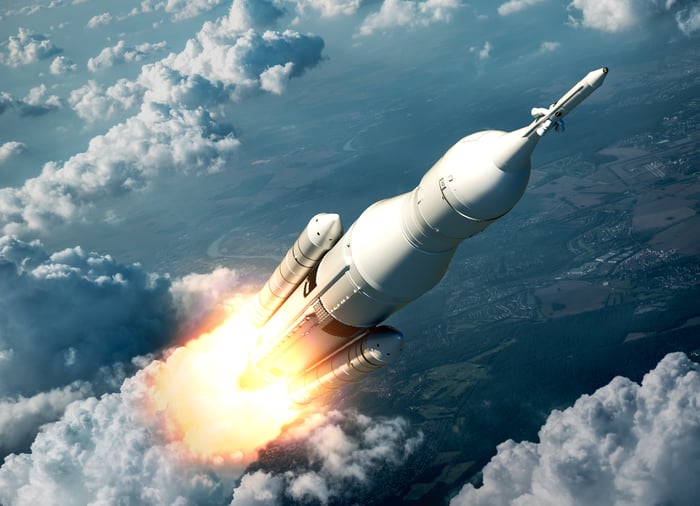 The National Space Society recently held a conference in Los Angeles, and SLS was apparently a hot topic at the gathering. Over the course of four days of mingling with space industry muckety-mucks, Politico Space  reports it heard multiple rumblings that bode ill for the Space Launch System money-pot.

For one thing, SLS has been marketed as key to NASA's efforts to eventually put astronauts on Mars. But as Politico reports, attendees at the conference expressed doubts as to "the wisdom or efficacy of a crewed mission to Mars in the next decade." California Republican and House space subcommittee member Rep. Dana Rohrabacher, for one, criticized the technology as too immature to support a manned Mars mission, saying "I think all this talk about going to Mars has been premature," and warning that NASA won't actually be ready to conduct a manned Mars mission before "20 years from now, maybe more."

Among other deficiencies, Politico cites a former Lockheed engineer pointing out that the Orion space capsule Lockheed Martin is building for SLS will be incapable of landing on the Moon, much less Mars. At best, the capsule would only be capable of docking with an intermediate orbiting space station off-planet (the so-called Deep Space Gateway). To conduct a landing on either the Moon or Mars, therefore, would require the development of yet another piece of hardware: a lander.

Perversely, other critics attacked the Space Launch System from the opposite direction -- arguing that not only is the technology built into this rocket insufficient to conduct a successful Mars mission, but it may actually already be obsolete.

For example, NASA is currently developing SLS as an expendable launch vehicle (meaning that, like most rockets in use today, it would be discarded after a single use). However, "spacecraft developers SpaceX, Blue Origin and others ... are moving more quickly and at lower cost" to develop reusable rockets, says Politico, citing unnamed sources. Another engineer -- this time an ex-Boeing employee -- said that even if SLS does ultimately get built, "I don't think it will last very long" given the strides SpaceX and Blue Origin are making in reusable rockets.

One government official, speaking off the record, was quoted arguing that given how much farther they are ahead of Boeing and Lockheed at this point, NASA might be better off outsourcing rocket development to SpaceX and Blue Origin. Instead of spending billions to build SLS, NASA might better use its funds to develop "dream space programs like a manufacturing facility in space, nuclear propulsion, and credible space solar power demonstrations" instead.

Will SLS be DOA? Should it be?

I have to admit that I've had many of these same thoughts myself. Over the years, we've seen the cost of the Space Launch System swell, and its development get delayed, even as Elon Musk continues to make strides in developing alternative, arguably more advanced launch vehicles such as the reusable Falcon Heavy and still-on-the-drawing-board "BFR."

Both SLS and Falcon Heavy, for example, are capable of sending payloads to the Moon and Mars (though FH's payload capacity is smaller). If an FH mission costs $90 million, and SLS will cost anywhere from $1 billion to $2.5 billion, then simple economics argue for NASA cutting its losses on SLS as soon as possible,and simply outsourcing its space transportation missions to SpaceX.

True, Musk is currently no longer planning to use the Falcon Heavy for manned missions. But he could if NASA asked, and he has stated that two Falcon Heavies working in tandem -- one for flying, and one for refueling -- could land astronauts on the Moon and bring them back again. This argument will only grow stronger once SpaceX completes work on its BFR, which will both cost less than SLS and have a greater payload capacity.

That being said, any move to kill SLS would face significant political opposition in Congress. Literally every state in the nation houses companies that provide parts to the program. It would pose a threat to the space businesses at Boeing and Lockheed, the two highest profile contractors on the SLS coalition; "space" accounts for roughly 20% of revenues at both companies, according to data from S&P Global Market Intelligence, a fact that will spur their lobbyists to action.

Long story short: Killing SLS would probably be good for taxpayers, and good for SpaceX. It probably wouldn't even be disastrous for Boeing or Lockheed. After all, to date SpaceX has not expressed any particular interest in a "manufacturing facility in space, nuclear propulsion, [or] credible space solar power demonstrations" -- all of which are projects the aerospace giants could bid for if NASA redirects funds currently earmarked for SLS toward new endeavors.

Just because this is the logical course to take, however, doesn't mean it's what will happen. In fact, so long as SLS's critics feel compelled to keep their criticism off the record and their names anonymous, I suspect the Space Launch System program still has a few years of life left in it.