Please ensure Javascript is enabled for purposes of website accessibility
Log In Help Join The Motley Fool
Free Article Join Over 1 Million Premium Members And Get More In-Depth Stock Guidance and Research
By Rich Smith - Feb 19, 2018 at 8:13AM

Last week, SpaceX launched the world's biggest (operational) rocketship. If you missed it, you can watch here again on YouTube. It was quite a show -- from first ignition all the way up to the release of Elon Musk's Red Tesla (TSLA 5.14%) Roadster into an orbital trip 'round the sun, blasting David Bowie's Life on Mars on the radio.

But if you signed off after the launch, you may have missed the very best part of the launch: Elon Musk's half-hour-long Q&A with his space fans explaining just what happened -- and what happens next.

Here are five of the most far-out facts he revealed. 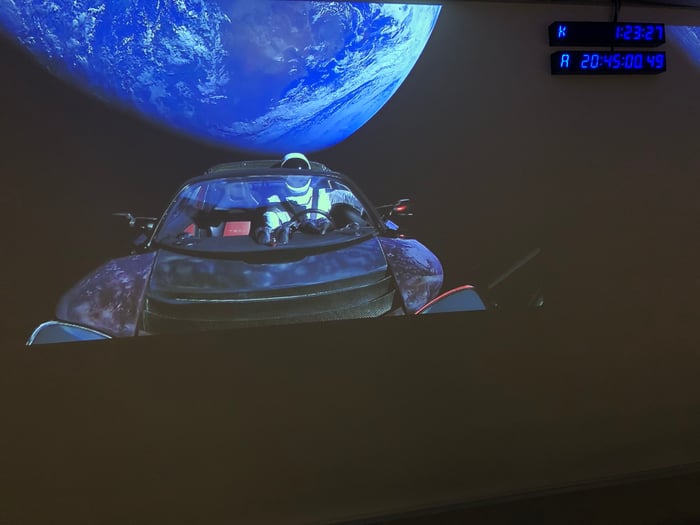 Don't panic. You're not seeing things. That really is a Tesla car in space. Image source: Elon Musk on Twitter.

One of the highlights of any SpaceX launch is watching the Falcon 9 first-stage rocket boosters descend to land back on Earth after accomplishing their primary mission. In that regard, SpaceX's Falcon Heavy launch on Feb. 6 offered a special treat: watching both booster rockets land in tandem back at Cape Canaveral -- a feat never before accomplished by anyone but SpaceX.

Admittedly, the performance wasn't flawless. SpaceX lost Falcon Heavy's core stage in a failed landing attempt at sea. But that's OK. This was, after all, the 1.0 version of that core, which Musk said constituted "basically a complete redesign" of the original Falcon booster. As a first attempt, FH's all-but-successful there-and-back-again trip to space was still pretty impressive.

What's even more interesting is that, as Musk told attendees at his press conference, the thing he was most nervous about was recovering the titanium gridfins on the two side boosters -- which did make it back to Earth safely. Said the SpaceX CEO: "That was the most important thing to recover were those gridfins."

As Musk then explained: "Those titanium gridfins [are] super expensive and ... the production rate on them is slow." Had they been lost, SpaceX would have had to buy new ones for use on future Falcon 9 missions -- and had to wait to get them, potentially delaying future launches.

Perhaps the thing that will surprise investors most, though, is that at the same time the world was applauding Falcon Heavy's launch, SpaceX was already moving on to the next big thing.

With the Falcon 9 "version 5" almost ready to fly, and Falcon Heavy flight-proven, Musk says "there won't be any more major versions of Falcon 9 or Falcon Heavy." Instead, SpaceX is turning its attention to building a "way bigger" rocket, and devoting "most of our engineering resources" to getting its even larger "BFR" rocket ready to fly -- perhaps as soon as next year.

BFR, says Musk, will be "a beast," measuring "30 feet roughly diameter" and more than 300 feet in length. SpaceX plans a first test flight of the complete BFR rocket "in three or four years." But even before that happens, Musk predicts "we'll be able to do short hopper flights with the spaceship part of BFR maybe next year."

That rather modest statement may have sent shivers down the spines of investors in package delivery companies like FedEx (FDX 5.62%) and UPS (UPS 1.88%) -- already reeling from last week's news that Amazon.com (AMZN 4.11%) is gearing up to compete with them directly.

To understand why, you have to think back to September 2017, when Musk laid out his plans for BFR at the International Astronautical Congress (IAC) in Adelaide, Australia. In the course of describing how he planned to make enough money to send BFR to Mars, Musk described an audacious plan to use BFR as a package (and maybe human) delivery service right here on Earth -- launching massive rockets into the air at multi-Mach speed, then bringing them back down to land on the other side of the ocean, like peaceful ICBMs.

Travel by BFR on Earth, in Musk's imagination, would begin and end at platforms at sea. Hearkening back to that, Musk mentioned that while "most likely" SpaceX will test BFR spaceship launches at its Texas proving grounds, he might decide to run the tests "ship to ship" -- launching from and landing on drone ships at sea.

In further evidence that this is the real plan, SpaceX announced on Wednesday that it is building a second drone landing barge to base out of Florida. (A third barge already bases out of California, supporting launches from Vandenberg AFB.) Like its twin, this ship will probably support Falcon 9 launches from Cape Canaveral, but it could also facilitate ship-to-ship test flying of BFR.

4. No more price rollbacks on Falcon?

Speaking of Falcon 9, over the past few years, SpaceX has won itself a reputation as sort of a Walmart for space access, offering "always low prices" to Low Earth Orbit. But is there a limit to Elon Musk's generosity?

Addressing the low cost of SpaceX launches last week, Musk said it was "interesting" that Falcon Heavy has "three times the capability" of Falcon 9, but costs only about 50% more to launch. The reason is that FH has the "same level of expendability as Falcon 9," discarding only "the upper stage," but reusing the more expensive first stage (and boosters), so that "the cost difference between a Falcon 9 and a Falcon Heavy is minor."

That sounds rather innocuous. But here's the thing: SpaceX was charging $60 million or so for Falcon 9 launches before it got the reusability thing figured out. Back then, the company line was that once reusability was achieved, it would allow SpaceX to cut its launch costs even further, perhaps by as much as 30%.

Now, Musk seems to have changed his tune. Now, he seems to be saying reusability what permits prices to go as low as $62 million (for Falcon 9), or $90 million (for Falcon Heavy) in the first place. I may be reading too closely between the lines, here, but it sounds to me like SpaceX's offer of steep discounts for flying on used rockets may no longer be on the table.

There may indeed be a limit to Musk's generosity -- and to how steeply he's willing to cut prices to steal business away from Boeing (BA 6.45%) and Lockheed Martin (LMT 0.79%). Combined with some smart marketing moves by their United Launch Alliance, that may give Boeing and Lockheed some breathing room -- and a chance to continue to compete.

5. SpaceX has a nose for cost-cutting

What would SpaceX get in exchange for relenting and not pushing launch prices any lower? Simply, it could save money to fund an eventual trip to Mars, by keeping more of its cost savings for itself -- and those cost savings are starting to add up.

In addition to savings from recovering and reusing rocket cores, Musk says "we're going to start recovering the fairings, the big nose cone," from Falcon launches as well. "My guess is in the next six months we figure out fairing recovery. We've got a special boat to catch the fairing. It's like a catcher's mitt but in boat form," Musk confided last week. (This same boat could be used to catch falling Dragon capsules, too.)

Now, that may not sound very exciting, but as we know from previous Musk talks, Falcon payload fairings cost about $6 million new. On a $60 million Falcon 9 launch, that's 10% of the cost. Referring to booster recovery, Musk once quipped: "Imagine it's a pile of cash that was falling through the atmosphere, and it was going to burn up, and smash into tiny pieces, would you try to save it? Probably yes."

Granted, next to the $30 million savings from reusing a booster, saving $6 million from reusing a nose cone may not seem like much. Still, it's free money, falling from the sky. SpaceX might as well hold out a bucket and try to catch it.

View from SpaceX Launch Control. Apparently, there is a car in orbit around Earth. pic.twitter.com/QljN2VnL1O