And why that's not necessarily a bad thing at all.

In a posting on the space agency's Facebook page -- (that's right.. nobody doesn't have a Facebook page anymore) -- last month, NASA described how it laid one of Aerojet Rocketdyne's (AJRD -1.06%) RS-25 rocket engines on its side, and turned it on full-blast to test its performance.

Actually, they ran the meter up a bit past full blast. Over the course of the 535-second test, the RS-25 burned through 150,000 gallons of liquid oxygen, or LOX, and 60,000 gallons of liquid hydrogen, or LH. In so doing, the engine reached its maximum certified sea-level thrust, and then raced right past it to reach 109% of rated capacity -- 512,000 pounds of "vacuum thrust."

According to a NASA-published fact sheet, LOX and LH propellant costs the Agency about $1.65 a gallon. So very roughly, last month's test firing probably cost taxpayers about $346,500 -- or $647.66 per second over the course of a nine-minute test.

That's an awful lot of money to go exactly nowhere -- or it could be a bargain.

Penny wise, pound foolish -- not a good policy in space flight
Last used to power the Space Shuttle into orbit, Aerojet Rocketdyne's RS-25 engine has been upgraded, and made the engine of choice for NASA's new Boeing-built Space Launch System (SLS). To generate the 8.4 million pounds of thrust needed to lift SLS into orbit with a 70-ton payload, SLS will require two powerful five-segment Solid Rocket Boosters, or SRB, built by Orbital ATK (OA), working in conjunction with a core stage powered by no fewer than four of Aerojet Rocketdyne's RS-25 engines.

Back when those RS-25's were in active use, though, they cost NASA about $40 million apiece for use in the Space Shuttle program. Presumably, inflation hasn't cut their cost any since the last shuttle landed in 2011. So putting four of them into the SLS core stage is going to cost NASA at least $160 million per launch. Making sure that the $160 million investment performs as it's designed to, before it needs to, is probably worth a $350,000 up-front investment.

In fact, it's probably worth testing a few times. And in fact, NASA says it still has a few tests to run before green-lighting SLS for launch. Later this fall, another developmental RS-25 will get another warmup. Later, a full set of four RS-25s will get lit up in a simultaneous test-firing of the complete SLS main engine preparatory to the first integrated flight of SLS and its Orion space capsule, to be designated Exploration Mission-1.

If all goes well, the stage should be set for EM-1 to blast off in late 2018 for a seven-day round trip 'round the Moon and back. 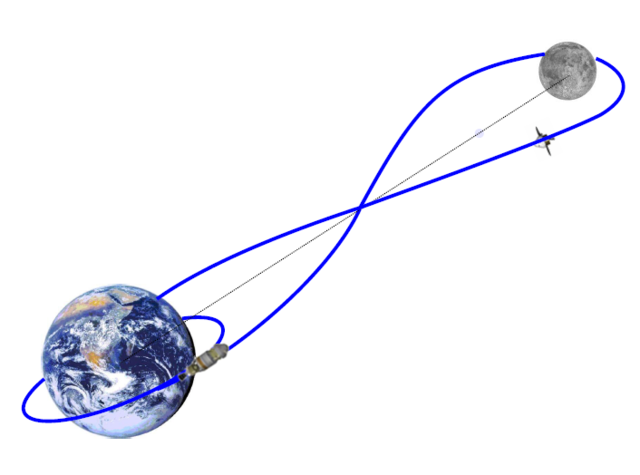 NASA's planned trajectory for the first "EM" mission. Will the next trajectory include Mars? Image source: NASA.

What it all means to investors
When EM-1 goes off like a rocket (literally), it will be one giant step back into space for the men and women of NASA, and an even giant-er leap for mankind. But what does it mean to investors in the companies that are helping NASA to make this happen?

It means good things -- and lots of money. Currently, NASA is spending about $3 billion a year to get the SLS program up and running. By the time SLS does its first full-power test launch in 2017, the bill should have reached $18 billion, en route to an eventual total program cost that NASA estimates at $35 billion.

To put all that money in perspective, $35 billion is more than 20 times Aerojet Rocketdyne's entire annual revenue stream from all the products it makes. It's nearly 10 times the size of Orbital ATK's annual business -- but only about a third of what Boeing makes in a year.

So the moral of this story for investors? Going forward, as SLS gains steam, aces test flights, and notches further victories in space, marquee aerospace names like Boeing and Lockheed -- which makes the Orion crew vessel for SLS -- are going to be dominating the headlines. But the companies for which space work can really move the needle on revenues are those that focus on space work to the exclusion of all else.

If I were a betting man, and betting on which companies will make the most profits from this space program, I'd put my money on Aerojet Rocketdyne and Orbital ATK, hands down.

SLS will come in many shapes and sizes, depending on mission requirements. Here's a look at how NASA sees the family portrait looking, a few years from now. Image source: NASA.

Rich Smith does not own shares of, nor is he short, any company named above. You can find him on our public stock-picking service, Motley Fool CAPS, where he publicly pontificates under the handle TMFDitty -- and where he's currently ranked No. 269 out of more than 75,000 rated members.

Orbital ATK Will Guide Hitchhikers to the Galaxy
401%