For the past three years, space company Orbital ATK (NYSE:OA) has been working with the U.S. Air Force to develop a new heavy launch rocket. As USAF envisions it, Orbital's new rocket would work alongside existing Delta IV Heavies (operated by Boeing and Lockheed Martin joint venture United Launch Alliance) and soon, the Falcon Heavy rockets that SpaceX began launching in February, giving the Air Force the option of choosing among three competing launch systems for the best combination of price and reliability.

This sounds like good news for the Air Force, but what does it mean for the companies that build the Air Force's rocket ships? 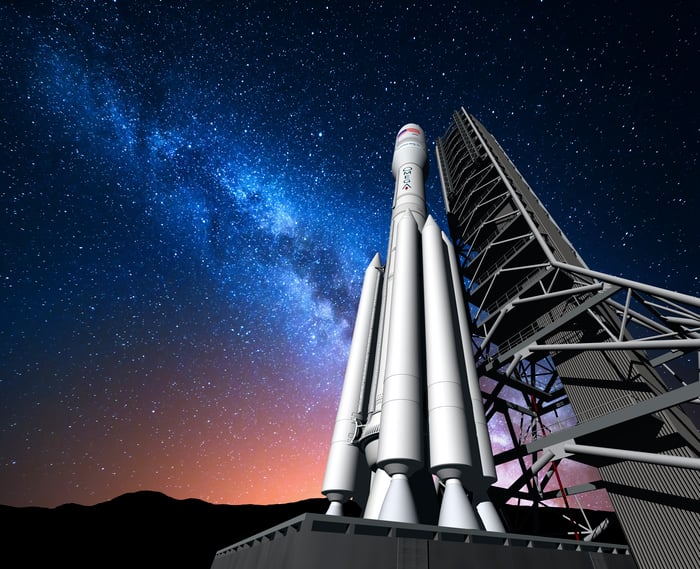 Initially named the "Next-Generation Launcher" as a placeholder, Orbital ATK's new rocket will use solid-fuel engines for its first and second stages, supported with strap-on solid-fueled boosters when necessary (all built in-house by Orbital). The rocket's third stage -- initially planned to feature a liquid-fueled Blue Origin BE-3U engine -- will now utilize a RL10C engine from Aerojet Rocketdyne instead.

Orbital plans to begin ground-testing the rocket next year, by which time Orbital ATK will probably have been subsumed into new owner Northrop Grumman (NYSE:NOC). In anticipation of testing beginning, Orbital gave NGL an official name last month: OmegA.

Announcing the new name for its new rocket and describing its engine configuration, Orbital ATK also emphasized OmegA's role as a jobs engine, estimating that the 500 employees currently working on the project could double in size "to about 1,000 people over the next 18 months." Development jobs are already scattered across key congressional districts in Arizona, Utah, Mississippi, and Louisiana, with operations jobs in both Florida (Kennedy Space Center) and California (Vandenberg Air Force Base). The company adds that "hundreds" more jobs will come into existence "across the country" as the company builds out its supply chain to produce OmegA.

That's assuming, of course, that OmegA ultimately gets built.

Why OmegA may not get built

But here's the thing: By the time Orbital ATK gets its OmegA rocket program up and running, there may be no need for yet another heavy rocket -- and an unproven one at that -- to join the field.

United Launch Alliance, maker of the Atlas V (medium) and Delta IV (heavy), has been sending up these rockets for more than a decade without suffering even one single failure -- 128 successful launches in a row.

SpaceX also has a 100% record of success in heavy launch. Granted, its record is only 1-for-1, having sent Falcon Heavy skyward just the one time in February. But still, that's an unblemished record of success in heavy launch so far. Meanwhile, the company's track record success on all launches, both medium and heavy, now stands at 27 straight launches without incident (according to the number crunchers at the fan website SpaceXNow).

What's more, SpaceX is planning to begin conducting "short hopper flights" utilizing at least part of its ballyhooed BFR rocket ship as early as next year. If that one comes to market before OmegA arrives, all bets are off. Not only Orbital, but ULA, too, could find themselves priced out of the heavy launch market.

In its annual update on the state of the global "Spacecraft and Launch" markets, StratSpace Intelligence reported in March that the number of large satellite missions on launch manifests appears to have flatlined. Going forward, StratSpace predicts "small missions and spacecraft will gradually begin to displace" larger satellite launches such as OmegA is designed to support. Indeed, in an analysis that may prove dangerously prophetic to Orbital's project, StratSpace noted that globally, heavy lift rockets "are in excess," while the medium and large categories of launch vehicles are currently "over capacity by about 100%." It predicted that "several major vehicles in this class [must] cease flying" to bring the market back into balance.

That's the very opposite of an argument for developing yet another heavy launch rocket. What's more, Orbital CEO Dave Thompson himself seemed to confirm this trend in an earnings conference call last year, lamenting an "order slump in the [large] commercial satellite market," and said he expects this "to continue for some time."

Despite all this, Orbital ATK keeps plowing ahead with developing OmegA, despite the fact that it says its new rocket won't begin flying in its "intermediate" configuration before 2021, won't win certification for Air Force "evolved expendable launch vehicle" (EELV) missions before 2022, and won't begin flying a heavy launch version of the rocket before 2024.

By then, it may be too late.