Please ensure Javascript is enabled for purposes of website accessibility
Log In Help Join The Motley Fool
Free Article Join Over 1 Million Premium Members And Get More In-Depth Stock Guidance and Research
By Rich Smith - Dec 4, 2017 at 8:27AM

Can a combined Northrop and Orbital challenge already-allied Boeing and Lockheed? Or will Northrop's arrival bring the whole space economy tumbling down?

It's official now. Less than three months after Northrop Grumman (NOC 1.63%) announced that it will be buying Orbital ATK (OA) for $7.8 billion  in cash, Orbital ATK shareholders voted  last week to approve the transaction.

The result: Regulators permitting, this deal is headed for a closing in the first half of 2018, after which Orbital ATK will disappear, Northrop Grumman get bigger -- and a new space star will be born.

With operations in both the military munitions market and in space launch, Orbital ATK is sort of a strange beast. More than half the company's revenue, however, come from its space business -- and that's the one I want to talk about today. 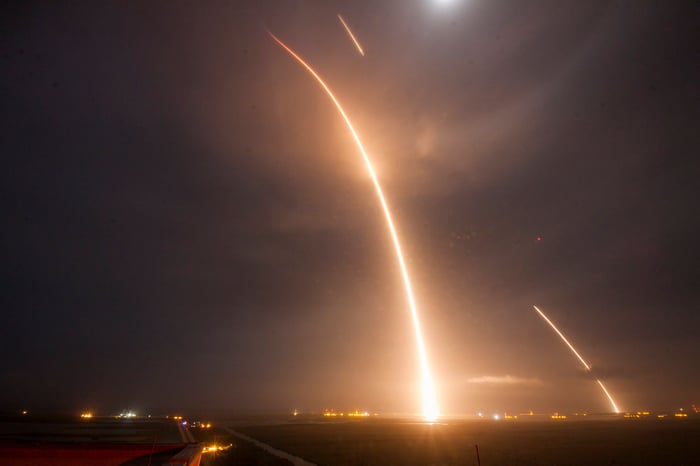 Is it just me, or does it feel like space is starting to get a bit crowded with all these rockets launching and landing all the time? Image source: SpaceX.

What Orbital does, and what it can do for Northrop

Historically, Orbital ATK has targeted the mid-range market for rocket launches, operating two main families of rockets -- Minotaurs launching payloads ranging from less than 1 ton to just over 3 tons, and Antares rockets hoisting payloads up to 8 tons in mass.

Higher up the food chain, the United Launch Alliance between Boeing (BA 2.28%) and Lockheed Martin (LMT 0.83%) focuses its efforts on launching much larger satellites -- often massive science satellites for NASA, or classified military birds for the Pentagon.

Utilizing its top of the line, $350 million-a-launch Delta IV Heavy launch vehicle, developed by Boeing, ULA can put a payload massing more than 28 tons into low Earth orbit (LEO). Slightly smaller Atlas V rockets, developed by Lockheed Martin, can do the same with payloads  ranging from just under 10 tons to just under 19 tons. Completing the list, SpaceX Falcons and Ariane 5 rockets from Airbus (EADSY 3.58%) subsidiary Arianespace have similar payload capacities to Lockheed's Atlas.

Father down the food chain we see a rising swarm of privately funded small rocket launchers with names like Vector, Rocket Lab, and Virgin Orbit, all offering to launch satellites weighing as little as 100 pounds (or less!) into orbit, and at price tags as small as $1.5 million per launch.

What Orbital and Northrop want to do in the future

With little competition from either the high end or the low end, Orbital ATK basically has a lock on the mid-range launch market here in the U.S., and it has been happily plugging away, launching Minotaurs and whatnot, and collecting anywhere from $26 million  to $50 million  per-mission. It's a lucrative business -- S&P Global Market Intelligence data show Orbital's two "space" divisions earning a combined 12.2% operating profit margin over the past year -- much better than the 7% margin that Boeing earns at its single space division, if not quite as rich as LockMart's 13.5% margin in space.

Yet this happy scenario may be about to change for Orbital, and for new owner Northrop Grumman. You see, for the past year, Orbital has been trying to break into the bigger-ticket heavy launch business by developing, with U.S. government support, a new Next-Generation Launcher" (NGL) that could lift bigger payloads. Using a modified Blue Origin BE-3U liquid-fueled upper stage atop two Orbital-built, solid-fuel lower stages with strap-on solid-fuel boosters, NGL should be capable of putting "intermediate and large" payloads in orbit.

Orbital has been developing NGL specifically to target the national security market, where satellites launch higher than LEO, into geosynchronous transfer orbit (GTO), and eventually enter geosynchronous orbit (GEO), to get a better view of the whole globe. According to Orbital figures, NGL should be able to lift payloads of anywhere from 5.5 to 8.5 tons to GEO -- a capability that would basically match ULA's Atlas V. (As a rule of thumb, you can figure a rocket's payload capacity to GTO versus LEO by dividing the LEO number by 2).

By 2021, Orbital expects to have NGL ready for operation -- and ready to challenge Boeing and Lockheed in space.

Now here's where things get dicey. Orbital and Northrop may not have noticed this, living as they do down in the happy medium of space launch -- but up in the stratosphere of rocket launch payloads, things have gotten very competitive of late. SpaceX's arrival with ultra-low-priced Falcon rockets is exerting significant pressure on the business models of ULA and Ariane/Airbus.

Amid falling profits and mass layoffs, ULA is scrambling to cut prices on its expensive launches. Meanwhile, in Europe, Airbus has entered into a wholesale revamp of its rocket line, attempting to develop a rocket cheap enough to compete with SpaceX, and even revisiting the idea of building reusable space planes. Now, Northrop's arrival -- with Orbital's new generation of NGL launchers in tow -- threatens to add even more price competition to the mix, and potentially spark a new price war that will hurt profits among all the major space players.

Maybe by allying with Northrop Grumman, Orbital ATK will be able to sell its new NGL line of rockets cheaply enough to compete in this marketplace -- but I wouldn't bet on it. If I were Northrop, the first thing I'd do upon taking control of Orbital is killing the NGL project outright, and double down on what Orbital ATK already does so well -- modestly size rockets, at modest prices.

That's Orbital's sweet spot, and Northrop Grumman should stick to it.