President Trump supports Russia's plan to build its own space station. But there should still be ways to invest in space.

Boeing (BA 3.52%) and its partners spent more than $100 billion to build the International Space Station (ISS). But in 2023 (or 2024 at the latest), Russia plans to take that investment apart -- detaching Russian-built sections of the ISS, and moving them into a new orbit to form the core of a new, all-Russian station.

By now, this should be old news for you, but here's something new: President Donald Trump  supports the Russian plan to abandon the ISS, and plans to cut off U.S. government support for the station as early as 2025. Boeing is not a big fan of the idea, as NASA currently pays it to help operate the station, and has awarded Boeing a multibillion-dollar contract to transport astronauts to the ISS. So Boeing has gone on record opposing the idea of "walking away" from it. 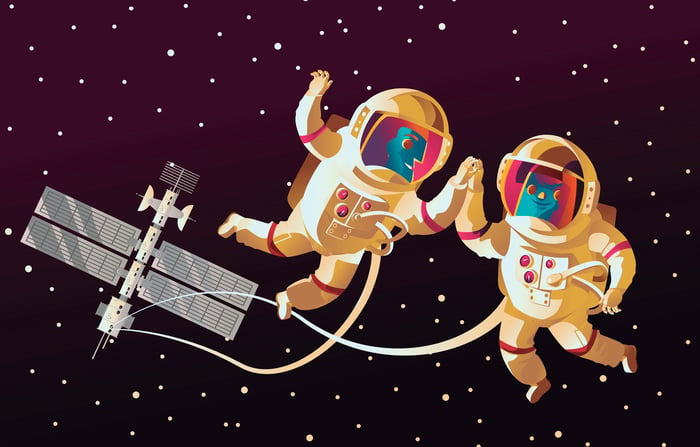 When Russia and NASA walk away from the the space station, investment opportunities will arrive. Image source: Getty Images.

But as we learned from the just-released NASA 2019 budget proposal, this plan is now a go, and NASA Administrator Robert Lightfoot says the Trump administration wants to "end direct federal government support of the ISS in 2025."

Why cut the ISS loose?

Money does not grow on trees -- especially not in space. Much as NASA loves space exploration, budget constraints necessitate picking and choosing the work it can afford to support, and outsourcing the rest. In saving money by cutting the ISS loose, NASA said that it hopes to free up funds to instead:

And if you ask me, this is what investors should really be focusing on -- not NASA's abandoning the space station, and potentially terminating contracts for Boeing, Orbital ATK (OA), SpaceX, and Sierra Nevada to build rocketships to staff and supply it.

Instead, I think investors should focus on the potential for new and different contracts being awarded for all the other space missions NASA will be able to undertake once released from the ISS cash drain.

Currently, NASA devotes as much as 20% of its budget to supporting the ISS -- anywhere from $3 billion to $4 billion annually. That's money that could perhaps be better spent accelerating development of the Space Launch System, still under development by a team of contractors that includes Boeing and Lockheed Martin, Orbital ATK and Aerojet Rocketdyne. It's a source of funds for building a cislunar outpost to facilitate missions to the moon and Mars, and to pay for initial efforts at returning mankind to the Moon -- and mining it.

And even before the ISS is handed over to private industry to operate, there may be opportunities for investment. To facilitate the station's transition to private ownership, the administration is asking Congress to allocate $150 million to NASA in 2019, and recommending NASA "expand international and commercial partnerships" to operate the ISS "over the next seven years."

And during this interim period, the administration wants to boost NASA's budget to pay for "development and maturation of commercial entities and capabilities [that will become] commercial successors to the ISS." This, too, will cost money -- and could give rise to an entirely new set of (perhaps eventually public) companies working to make the ISS a commercially viable operation.

Already, privately held Made in Space has a 3D printer aboard the station, and as that technology develops, it's conceivable the ISS and other space stations could "print" their own replacement parts on-site. Bigelow Aerospace -- also private today -- has for months been testing an inflatable module attached to the ISS, which could one day replace the sections Russia will be detaching. Similarly, established space companies like Boeing, Lockheed, and Orbital have all proposed novel alternatives for converting spent rocket sections into habitable living space for the ISS, or for a new space station.

Axiom Space -- which, you guessed it, is also private -- has a plan to build an entire new space station to replace the ISS when, at some point in the future, it is finally decommissioned and taken out of orbit. And Axiom says the cost of its space station will be at least an order of magnitude cheaper than what NASA spent to build the original ISS (i.e., if the ISS cost $100 billion, then an "Axiom Station" might cost only $10 billion).

As Lightfoot says: NASA "can't do everything, and as always, we've had to make hard choices, but we will continue to forge new paths and partnerships that strengthen our industrial base and our engagement with other nations to achieve challenging goals that advance our capabilities and increase our security and economic strength."

While we'll certainly be sad to see the ISS go, I think we can all support NASA's decision to move out of low earth orbit, and expand the borders of the final frontier.