NASA is talking with Russia about establishing a joint space station in orbit around the moon. SpaceX and Blue Origin are both pinging NASA with suggestions that their (respective) rocket ships would be just dandy vessels to help build a moon base -- whether on the moon or in orbit around it.

Why all the sudden interest in moon bases and moon space stations, you ask?

In a word: water. 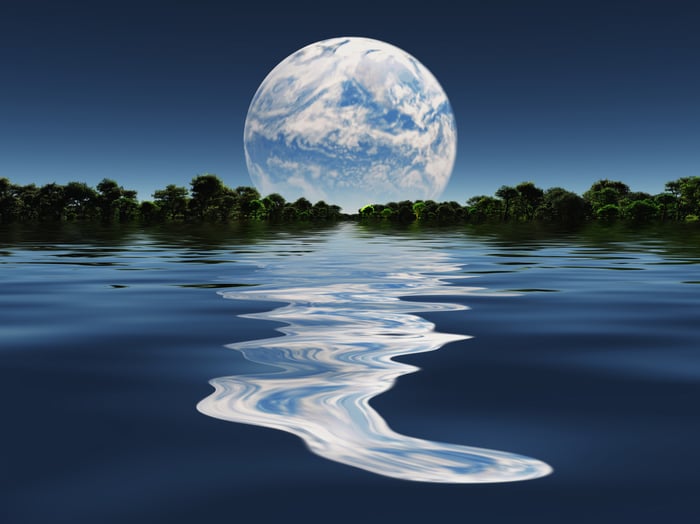 There's water on the moon -- maybe not this much, but maybe enough. Image source: Getty Images.

Water is something that rocket ships can use for fuel -- by splitting up the water molecules through electrolysis into hydrogen (a fuel) and oxygen (an oxidizer). (Cooled to a liquid and recombined in a rocket engine, liquid hydrogen (LH2) and liquid oxygen (LOX) undergo an exothermic reaction, generating energy and blasting out H2O as a propellant.)

In short, moon water is the sine qua non for turning Earth's first and favorite satellite into a floating gas station for interplanetary rocket ships.

Luckily for would-be cosmic explorers, it's starting to look like the moon does in fact have water -- a lot of it. An analysis of moon rocks brought back from the Apollo 15 and 17 missions in the 1970s, backed up by a new study of data recently received from satellite surveys of the moon, confirms that layers of volcanic rock deep within the moon (but minable) contain "high amounts" of water ice trapped in "glass beads." Indeed, says Brown University professor Ralph Milliken, lead author of the study, "[M]ost of the mantle of the moon may be 'wet'" and suitable for water extraction.

Why moon water is important

Since the 1960s, scientists have hypothesized that the deep recesses of lunar craters at the moon's poles, shielded from the sun, could contain deposits of water ice -- moon water in solid form. Problem is, if the poles are the only place to find water, this limits NASA's ability to situate its lunar bases, and makes getting to the water harder.

And that's not all. It costs a lot to bring water (or anything else) up from Earth's surface for use in space exploration -- as much as $35 million a ton. As Milliken explains: "Water is heavy and expensive to take from Earth to space, so any bit of water that you can get on the moon instead of bringing with you from Earth is a big deal and opens up possibilities for sustained human presence on the moon."

Simply put, if the moon has water -- and if we can get at it -- then that makes everything in space a whole lot cheaper, a whole lot easier for taxpayers to afford, and a whole lot more attractive for commercial development.

And why that is important to investors

So how much water is on the moon, where is it specifically, how deep beneath the surface is it, and how difficult is it to mine and extract? These are the next questions to address. And as soon as early next year we could begin addressing them, when one lucky company is expected to win the Google Lunar XPRIZE for launching and landing a robot on the moon, there to beam back high-definition video of what it finds.

One of the contestants (with one of the better chances of winning) is privately owned Moon Express, which plans to try to load up a lander on a Rocket Lab Electron rocket and put it on the moon before the end of this year. And wouldn't you know it? One of the first paying projects Moon Express plans to undertake after winning the Lunar XPRIZE will be to carry a University of Maryland experiment to begin mapping the moon.

Assuming this and related explorations bear fruit, further down the road we could see publicly traded companies (i.e., the kinds you can invest in) getting into the act. Lockheed Martin and Boeing are hard at work building a lunar-capable Space Launch System to carry more equipment to the moon. Once they get there, opportunities may arise for such terrestrial mining experts as Caterpillar (mining equipment) and ExxonMobil (deep drilling) to begin prospecting for moon water to enable even deeper exploration of the solar system.

We could be witnessing the birth of a new space race, folks -- just as soon as someone strikes moon water.