Rockets today have enough extra oomph to lift more than one payload at a time -- and with help from Orbital ATK, maybe a lot more than just one payload.

Sometimes, you find the darnedest things buried in the Pentagon's daily digest of contract awards.

Earlier this week, we finally got the details. 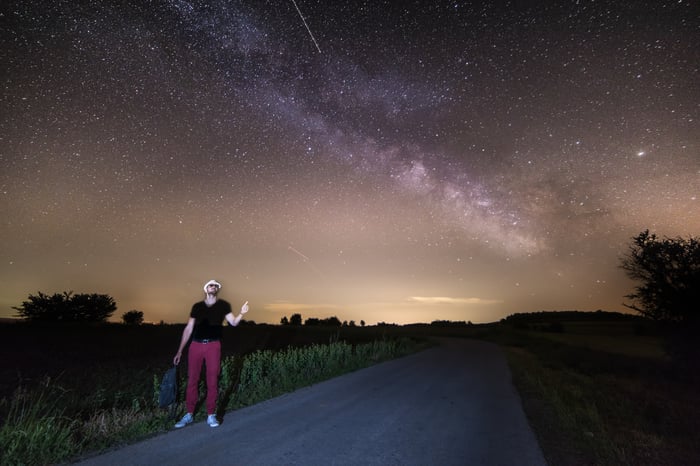 Can somebody give this guy a lift? He wants to go...up. Image source: Getty Images.

Disk-shaped, with receptacles to house up to six "hosted" satellite payloads, or room to attach up to 12 satellites that can be detached to enter separate orbits, the "Long Duration Propulsive Evolved Expendable Launch Vehicle Secondary Payload Adapter" (ESPA) is designed "to carry small payloads or deploy small satellites" into orbit for the Air Force.

More than a month after winning the ESPA contract, Orbital ATK got the all-clear to issue a press release describing it. As Orbital explains, ESPA is an "innovative platform, positioned between the launch booster and a primary space vehicle." In this position, ESPA basically hitchhikes up into space, nestled between a rocket's booster and the main payload or capsule atop the rocket.

Once the booster falls away, the main payload heads off into orbit, detaching ESPA along the way -- so that ESPA can enter its own orbit, and/or deploy its attached satellites into their own orbits. In the former case, ESPA would use its own "power, pointing, telemetry, command and control" capabilities to host and support satellites onboard. Thus, ESPA offers the Air Force a "modular, cost effective and highly capable platform for hosting technology development and operational payloads."

What it means for Orbital ATK

Orbital ATK was awarded $34 million to build the first ESPA, which it has trademarked as "ESPAStar." Assuming the Air Force likes the first one, it has options to order two more from Orbital, presumably at similar prices -- turning this into a $100 million program in relatively short order.

Even without the options, the $34 million initial contract is worth nearly 1% of Orbital ATK's annual revenue (according to data from S&P Global Market Intelligence), which makes this an important award for Orbital. But the more I think about it this contract, the more I think it might be even more significant than meets the eye.

Read those capabilities again: "Power, pointing, telemetry, command and control." A "modular ... platform for hosting ... payloads." ESPA sounds to me a lot like another of Orbital ATK's whiz-bangier space projects, namely, the "Mission Extension Vehicle" (MEV) that Orbital is building to service in-orbit satellites as a sort of space tow truck service.

Back when that project was announced, Orbital described MEV as a spaceship capable of attaching itself to defunct or glitching satellites, and repairing or refueling them -- or of simply providing power and guidance to push a satellite back into its proper orbit. ESPA, with its ability to start off with attached satellites, and "host" them through ESPA's own systems, sounds sort of like a MEV -- perhaps a "pre-loaded" MEV, rather than one that arrives in orbit empty and has to find itself a customer. But the principle is the same.

Northrop Buys Orbital ATK, and All of Space Launch Is Watching
413%