When NASA builds rockets, it builds big, and the bills are big. Can private companies do better?

NASA wants to put a man on Mars. For the time being, that looks like a giant leap. But the good news is that last week, the National Aeronautics and Space Administration took at least one small step in the direction of Mars.

Artist's conception of what SLS will look like upon completion. Those two "little" rockets on the sides? Those are the boosters that NASA tested last week. Source: NASA.

Out in the Utah desert, NASA successfully test fired a new rocket engine capable of lifting American spaceships to the Moon, the Asteroid Belt, and even to Mars. Built by the rocket scientists at Orbital ATK (OA), it burns an amalgam of powdered aluminum fuel, oxidizer, and binding agents. Clocking in at a remarkable 177 feet tall and producing about 3.6 million pounds of thrust (22 million horsepower) during its two-minute burn, the new solid-fuel Space Launch System rocket booster is the biggest rocket engine we've ever built.

If you build it, they can go (to Mars)
NASA plans to conduct another test firing early next year before putting the boosters to work with an actual launch, scheduled for 2018. Two boosters will be needed for NASA to launch its new Boeing (BA 1.26%)-built Space Launch System into space, adding oomph to the SLS's core engine group comprising of four RS-25 engines manufactured by GenCorp (AJRD 2.71%).

Combined, all these engines will permit SLS to lift payloads as great as 70 metric tons into low Earth orbit (LEO). And once that's accomplished, NASA plans to double the power, adding enough engines to lift 130 tons -- all the way to Mars.

But here's the kicker: When they get there, they may find that SpaceX has already set up camp.

SpaceX has the T-shirt. Now it just needs to build the spaceship. Photo: SpaceX.

Occupying Mars
While NASA and its old-industry partners -- Orbital ATK and GenCorp, Boeing and Lockheed Martin (LMT 1.26%) -- are all busily trying to assemble an SLS for a trip to Mars 25 years from now, privately owned SpaceX is making leap-ahead progress... today.

SpaceX already advertises on its website one rocket capable of lifting 53 tons of payload to LEO. That's about 75% of what SLS will do when it's ready... three years from now. And the modular way in which SpaceX is building its Falcon 9 family of spacecraft -- nine engines to a booster, one booster for a basic Falcon 9 rocket, three boosters for a Falcon Heavy -- suggests that, assuming my algebra is right, by adding two more boosters to the basic Falcon configuration, a Falcon "superheavy" rocket could lift as much as 88 metric tons -- 26% more  than SLS.

And that's not all. As SpaceX CEO Elon Musk informed investors in a recent chat on Reddit, SpaceX is hard at work adding an order-of-magnitude improvement on the Falcon design. Dubbed "Raptor," Musk says that the new rocket he's building for a manned Mars mission will be big enough to send 100 tons of payload, and/or 100 live human colonists -- not just into orbit, but all the way to Mars.

What's more, because SpaceX is actively working to incorporate vertical landing-and-takeoff technology into its rockets, Falcon and its successors will be the first true "reusable" rockets.

So what does all of this mean for NASA and its contractors -- and taxpayers?

What it means to you
Two things. First and most immediately, SpaceX is already neck and neck with NASA's usual contractors when it comes to the ability to lift payloads into LEO. And SpaceX says it can do it cheaper than NASA, and once it works out the kinks in its reusable rocket tech, much cheaper. More importantly for Mars futurists, though, SpaceX is going to be able to take its "reusable" rocket technology, developed for use on Earth, and translate that into rockets that can go to Mars... and then come back.

For anyone making the outbound trip, that's going to be a key selling point, and a big point in SpaceX's favor. Meanwhile, NASA is still staring at an anticipated $7 billion program cost for SLS through first launch in 2018, and an anticipated $500 million-per-launch cost after 2018.

It gets you to thinking: Maybe the commercialization of space exploration isn't just a good idea for the future. Maybe it's already here. 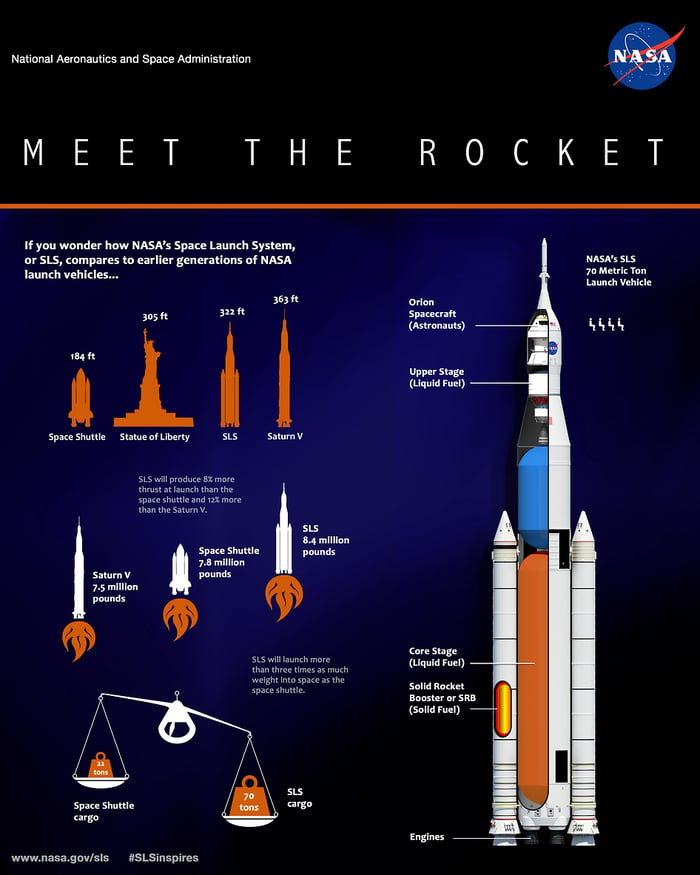 To boldly compare and contrast SLS with rockets that have gone before... Source: NASA.

Fool contributor Rich Smith does not own shares of, nor is he short, any company named above. You can find him on CAPS, publicly pontificating under the handle TMFDitty, where he's currently ranked No. 288 out of more than 75,000 rated members. The Motley Fool recommends Orbital ATK. Try any of our Foolish newsletter services free for 30 days. We Fools may not all hold the same opinions, but we all believe that considering a diverse range of insights makes us better investors. The Motley Fool has a disclosure policy.