But psst!: This could actually be even bigger news for SpaceX.

Which came first, the chicken or the egg... in space?

That's the dilemma facing the International Space Station this year, as American astronauts clamber around the outside of the ISS, trying to prepare it to receive new "space taxis" from Boeing (BA -3.42%) and SpaceX.

Beginning next year, NASA will transition from a program in which it pays Russia's Roscosmos $70.7 million a head to transport astronauts to and from the ISS, to one in which American astronauts travel into space aboard U.S.-built spacecraft.

Sometime in 2017, Boeing's CST-100 space capsule and SpaceX's Dragon V2 will take back the job of transporting our supplies and astronauts to the ISS. But in order to do so reliably, they need new docking stations in which to "park" at the station. This requires modifying the ISS's structure, a job that's been ongoing all this past week, as astronauts conducted a series of three spacewalks to lay cables needed to power two new docking stations.

As with the space taxi service itself, the docking station work is a joint endeavor between Boeing and SpaceX. Boeing built the docking stations; SpaceX will be delivering them to the ISS later this year. Once they're installed, the ISS should be ready to receive regular deliveries of supplies and astronauts from Boeing's and SpaceX's new spaceships.

To orbit... and beyond
Installation of these docking stations will greatly facilitate cargo and personnel transfers between the space taxis and ISS -- but that's not all they'll do. In a press release this past summer, Boeing noted that the stations will be upgraded over time to support interactions between the ISS and much larger spacecraft, including those powered by the new Space Launch System -- also built by Boeing. This, in turn, will facilitate future space missions beyond Earth orbit -- to the Moon, to the asteroids, and, eventually, to Mars.

But what does all this mean to investors?
Here at The Motley Fool, we're as interested as anyone else in keeping up with developments in space tech. But what we really enjoy is figuring out how these developments might affect investors' portfolios. Here's how we look at that angle of the ISS story, in a nutshell:

There are multiple companies involved in America's race (back) to space. Two of the biggest beneficiaries, though, are the same two companies working so hard to get American astronauts back to ISS aboard U.S.-built spaceships: Boeing and SpaceX.

Boeing is an absolute titan in space, and NASA's No. 1 private contractor on space endeavors. (Boeing's partner in the United Launch Alliance space launch venture, Lockheed Martin (LMT 0.15%), is No. 2.) While Boeing's $91 billion in annual revenues are vastly diversified among the civilian aerospace, military, and space spheres, S&P Capital IQ calculates that primarily "space" work makes up nearly 9% of Boeing's revenue stream -- about $8 billion annually.

(Curiously though, with Boeing earning only 8.7% operating profit margins at its "Network & Space Systems" division, this is one of Boeing's least profitable endeavors. Turns out, Lockheed's $8.2 billion "Space Systems" business is actually much more important to Lockheed than Boeing's space business is to Boeing. More than one dollar out of every five that Lockheed collects in a year comes directly from space -- and with a 12.7% operating profit margin on this work, space is actually Lockheed's second most profitable area of business.)

And the other half of ISS's dynamic duo this week: SpaceX? As a privately held company, it's hard to say precisely how profitable SpaceX is as a business. But with "space" built right into the name, you know that the space business accounts for essentially all of SpaceX's revenues.

That's why this week's news is especially important to SpaceX: Winning the space taxi contract was only the beginning. Getting the docking modules installed, so that NASA can dream up ever more ambitious forays into space, and hire SpaceX to perform them, is the real prize for SpaceX. Put another way, before you can lay eggs, you need a chicken...

Or was it the other way around? 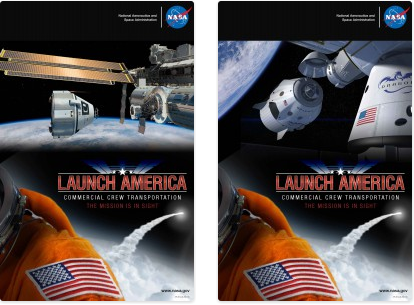 Rich Smith does not own shares of, nor is he short, any company named above. You can find him on CAPS, publicly pontificating under the handle TMFDitty, where he's currently ranked No. 307 out of more than 75,000 rated members.