The uses of artificial intelligence (AI) are numerous, from data analytics to driverless cars and smart digital assistants to cancer research. But as the technology is integrated into more industries, it can be difficult for investors to decipher the best way to benefit from its growth, and which AI companies to bet on.

To help you understand why the artificial intelligence market is such a big deal -- and which companies are making big waves -- here are three reasons why AI is worth paying attention to. 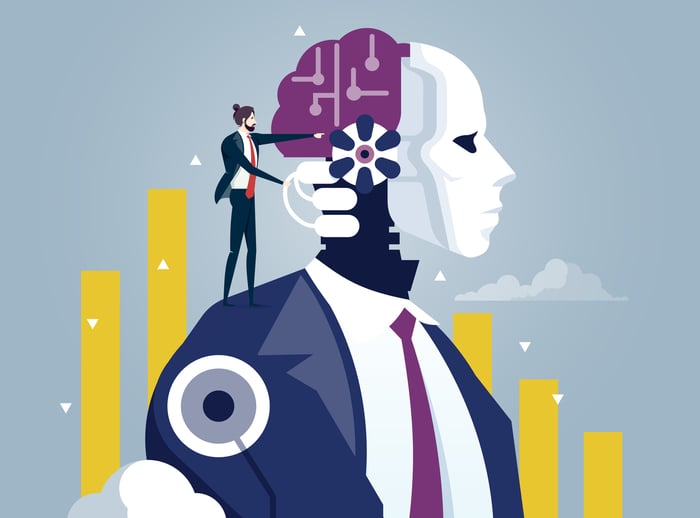 1. It's a massive opportunity for companies

Artificial intelligence will allow companies from the automotive, financial, industrial, technology, healthcare, and virtually every other industry to add services and make their businesses more efficient.

A PwC report estimates that between revenue from new services and the cost savings it delivers via improved productivity, AI will add $15.7 trillion to the global economy by 2030.

If you're skeptical that AI could benefit businesses to such a large degree, consider Amazon (NASDAQ:AMZN). The tech giant uses artificial intelligence to determine product placement on its e-commerce sites, uses it to figure out which deals to offer which customers, and has integrated it into its Amazon Web Services cloud computing platform. Machine learning, a subset of AI, is so important to Amazon that its CEO, Jeff Bezos, told investors back in 2017 to "watch this space."

2. It's going to transform the automotive industry

One of the most visible efforts to use AI may be in the automotive industry, where it is a key technology in the development of self-driving cars. To be sure, it will be years before autonomous vehicles are buzzing around roads at mass scale, but the moves being made by Alphabet (NASDAQ:GOOG) (NASDAQ:GOOGL), General Motors (NYSE:GM), and others to make that happen are pushing things ahead quickly.

AI is required in order to for an autonomous driving system to accurately and quickly process the massive quantity of visual data taken in by cameras and sensors, and then act on it appropriately to steer, accelerate or brake, etc., the vehicle.

GM's self-driving subsidiary, Cruise, is making big moves in the space as well. Cruise is working on its own autonomous vehicle technology, and has scored investments from Honda and others, and this year start boosting its hiring as it looks to make its technology more widespread.

Research firm IHS Markit estimates that by 2040, more than 33 million autonomous vehicles will be sold annually.

Finally, consider how prevalent AI-powered digital assistants (Siri, Alexa, Google Assistant, Cortana, etc.) have become. While we may  most often take advantage of their more basic functions -- like streaming music -- they're increasingly becoming an important way for us to control our devices and use them more efficiently.

As this technology evolves and is integrated into more of our devices, as well as our homes and cars, companies will be able to understand their users needs better --i n order to sell them more products or advertisements. Meanwhile, users will be able to hand more tasks over to their AI assistants, like making restaurant reservations over the phone.

If buying shares in Alphabet, Amazon, GM or Apple doesn't fit into your investing strategy, remember that there are lots of ways to benefit from the AI boom. For example, you could tap into the AI market through these Chinese stocks, or these under-the-radar AI investments.

The important thing to remember is that AI is transforming nearly every industry, so if you look, you should be able to find stocks that match your investing strategy and are poised to profit from this advancing technology.