Last month, President Trump took aim again at India's high tariffs on U.S.-made motorcycles, describing the taxes as unfair to American manufacturers like Harley-Davidson (NYSE:HOG). The import duty had been 100%, but by threatening to impose tariffs on India's motorcycle exports to the U.S., Trump convinced Prime Minister Narendra Modi to cut them to 50%. Now, the president is pushing to get them eliminated entirely, noting that there are no tariffs on Indian motorcycles imported into the U.S.

While a level playing field on trade is a worthwhile goal, those tariffs are not really a key issue for Harley in India. Even completely eliminating the duties would not lead to a significant increase in the company's sales there. 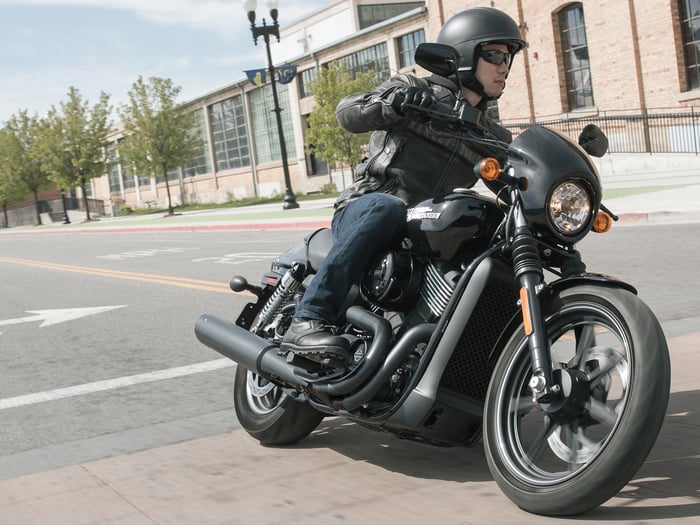 Harley-Davidson sold 228,000 motorcycles worldwide in 2018, nearly 60% of them in the U.S., but it only sold about 3,400 bikes in India. However, because it has a manufacturing facility in Gurugram, India, where it makes the Street 750 model for sale in non-U.S. markets, and also assembles its larger bikes using parts made at its U.S. plants, those motorcycles are either free of tariffs altogether in the first instance or are only subject to a 15% duty in the latter. A 15% tariff isn't nothing, but it's not a particularly onerous tax either, and shouldn't do too much to discourage potential buyers from purchasing a Harley, all other things being equal.

Rather, the motorcycle company has other, bigger, problems plaguing it -- ones it will need to correct if it wants to hit the goal it has set of making international sales 50% or more of its total volume. It took a couple of steps in that direction recently when it announced plans to sell two tiny (by Harley standards) motorcycles in China, but with its roadmap for growth running through the heart of India, Harley will need to do more.

The thing that's likely holding back Harley in India is the same thing hindering it elsewhere around the globe -- the price tag on its motorcycles. A Street 750 starts at around 533,000 rupees, or about $7,800 at current exchange rates, while its Road King model sells for 2.55 million rupees, or over $37,000.

Contrast that with Royal Enfield, India's largest bike manufacturer by far with a 90% market share. Its offerings start at around $2,100 for the Classic 350 motorcycle. Some 90% of the motorcycles it makes have engines of 350 cc or smaller.

Indian automotive giant Mahindra & Mahindra recently relaunched the popular Jawa brand of motorcycles, and the Jawa Forty-Two 293 cc model starts under $2,300.It plans to introduce a premium line, the Perak, that is expected to carry a $2,800 price tag.

It's likely that their high price tag impacted sales to a certain degree. After selling around 4,700 motorcycles in India in 2015 and 2016, they fell below 3,700 in 2017 and then to around 3,400 last year. Undoubtedly the demonetization policies of the Indian government, along with tax reforms that were introduced two years ago played a role, but having a more expensive motorcycle won't help in such situations.

If Harley is serious about growing its foreign business, it's going to need to build cheaper bikes. The planned Chinese models -- which will have engine displacements of just 336 cubic centimeters -- are a start, but the company has yet to announce how it will price them, other than to say they will be "affordable."

Harley-Davidson's numerous international competitors are tough, and they offer far more economical options. Unless it can adjust its attitude to meet those rivals head on when it comes to price, free trade issues and tariffs will be the least of its worries.