Harley-Davidson (NYSE:HOG) looks to be finally getting serious about making international markets account for at least half of its sales volume. It will be partnering with Chinese motorcycle maker Qianjiang Motorcycle to build bikes for China and other Asian countries that are significantly smaller bikes than what most would conjure up when they think of a Harley.

Yet the new motorcycles will be the first ones not produced in a Harley-Davidson plant, and that could open up the bike maker to more criticism over shipping U.S. jobs overseas. 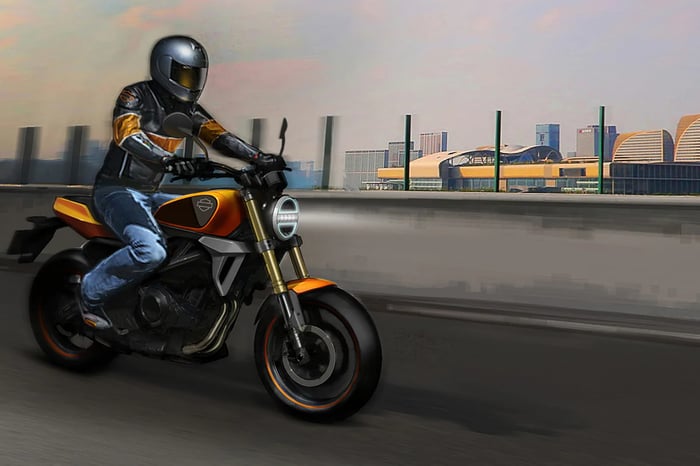 Foreign markets a haven from tariffs

Harley, of course, is suffering from a protracted decline in U.S. motorcycle sales, and although international sales have held up better than domestic ones, last year they ended flat. Tariffs on steel and aluminum imports have hit Harley, Polaris Industries, and other powersport vehicle manufacturers, but Harley and Polaris have the wherewithal to transfer some production overseas to sidestep some of the costs.

Although Polaris has largely escaped criticism for shifting some production to Poland after the tariffs were imposed, Harley-Davidson has endured withering criticism from President Trump, its unions, and even Harley owners and enthusiasts for its actions. Yet the criticism was misplaced, as the motorcycles being built in countries like India and its new plant in Thailand were still manufactured in the United States. The foreign facilities were simply assembly plants for the knock-down kits and allowed Harley to partially save costs on bikes it was selling closer to the foreign markets anyway.

The new Chinese-made bikes, however, will be built by Qianjiang for the local market, so it is Harley's first truly foreign-made motorcycle. Qianjiang is owned by Geely Automobile, a leading Chinese automaker that owns the Volvo brand and 10% of Mercedes-Benz parent Daimler.

The new motorcycles will also be some of Harley's smallest bikes ever produced, with engine displacements of just 336 cubic centimeters. Harley's motorcycles have engines that start at 601 cc and go up from there, but its biggest, most popular bikes have engines that are well over 1,000 cc. Beginning with its 2017 models, Harley introduced the Milwaukee-Eight engine, its first new powerhouse in 15 years that came in two massive sizes -- 1,750 cc and 1,850 cc.

Catalyst for growth in China

The new motorcycles will go on sale in China by the end of 2020. While it's possible these motorcycles will quickly spread beyond China's borders as small bikes are much more popular than the usual bulky machines Harley is known for, it's doubtful they would ever cross the ocean to be sold here. Considering all the rancor caused by simply moving production to foreign facilities, importing a Harley-Davidson motorcycle not built in the U.S. seems unimaginable.

But the lessons Harley learns from the experience could certainly inform a domestically built bike, particularly as the smaller-engine displacements would probably find a more willing market among today's motorcycle buyers. Those buying the big bikes are becoming a rare breed as Harley's core customer ages out of the market.

While the price for the Qianjiang motorcycle wasn't mentioned, Harley has said the Chinese consumer wants "premium" products, and though undoubtedly it will be much cheaper than its regular motorcycles, Harley may find pricing a challenge. I believe it has priced itself out of the electric bike market with its LiveWire electric motorcycle that's set to make its debut soon.

However, Qianjiang has also said it will be affordable, so maybe Harley can still avoid the pitfalls it encounters here by failing to discount its bikes.

A course it needs to take

There's a lot of potential for Harley-Davidson in this new bike, but also potential blowback if buyers object to a foreign-made Harley, regardless of the market it's targeted at. It's essential that the bike maker start building smaller bikes, and partnering with a reputable manufacturer like Qianjiang allow it to take a big step forward in reversing its sales slide. This move may finally allow Harley to make good on its promise to have foreign markets be on an equal footing with the United States.