The industrial supply companies' results had a lot to say about the outlook for the upcoming quarterly reports -- not all of it good.

There's no way around it: The industrial economy is slowing, and the recent results from industrial supply companies MSC Industrial ( MSM 0.24% ) and Fastenal ( FAST 0.79% ) suggest there could be some unwelcome surprises in earnings season. Given their short-cycle sales and exposure to manufacturing, construction, and heavy industries, the industrial suppliers are always seen as key bellwethers. Let's look at the what their recent earnings might mean for other industrial stocks.

There are three key conclusions from the recent quarterly earnings reports -- two of them apply across the board, while the third relates specifically to the industrial supply sector: 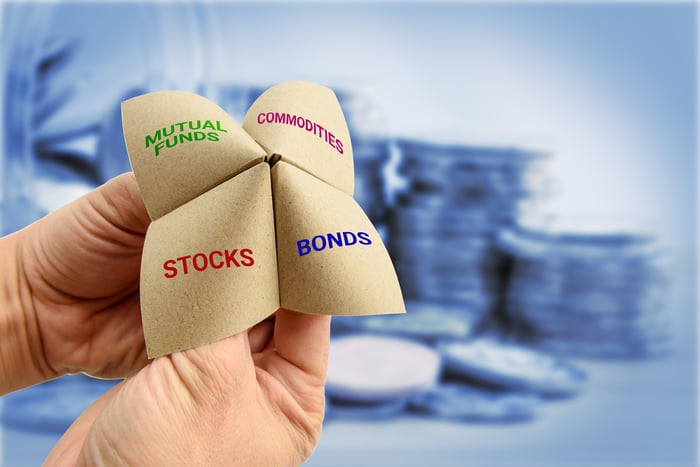 Unfortunately, the latest data from both companies suggests a slowing in end demand, particularly for MSC -- implying that heavy industries have decelerated noticeably. In addition, as you can see below, Fastenal's manufacturing and construction sales have experienced the same thing -- indicating a broad-based slowdown. 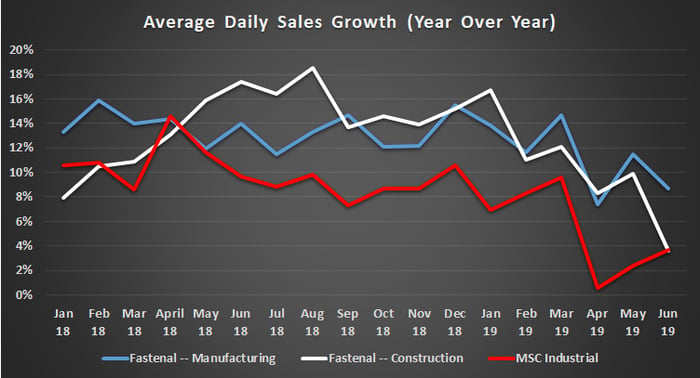 The data was backed up by management's commentary, with MSC Industrial's CEO Erik Gershwind talking of "a step down in industrial demand since our fiscal April," which is "evidenced in discussions with customers and suppliers, along with data points coming from many sources."

Meanwhile, Fastenal CFO Holden Lewis talked of activity having clearly slowed, and he pointed out that sales of fasteners (its most cyclical product) only grew 5.5% in the quarter, compared with a 9.5% rise in sales outside the fastener segment. Regarding industry end markets, Lewis said:

Manufacturing was up 9.1%. Oil and gas remain soft, and our heavy equipment categories also slowed. Construction was up 7.2% in the second quarter.

Fastenal's sales growth remains good on an absolute level largely thanks to its investment in on-site locations and vending machines. However, management at both companies described their results as "disappointing" and not in line with expectations.

The slowdown in heavy industries implies that companies might not be so willing to sign off on capital spending in the near future -- possibly bad news for a company like Rockwell Automation ( ROK 0.53% ). Rockwell's management is hoping that growth from oil and gas as well as heavy industries will help to offset weakness in automotive spending in 2019.

It's a similar story at iconic companies Stanley Black & Decker ( SWK 3.07% ) and Caterpillar ( CAT 0.51% ). Both expect a better second half in 2019. But with their significant construction exposure, it's hard to not see some pressure, given what the industrial supply companies said. Moreover, Stanley's exposure to manufacturing and Caterpillar's oil and gas production and mining equipment also suggest some cause for concern.

Costs are rising, but what about pricing?

It's no secret that Amazon's entry into the supply market has pressured industrial supply companies' margins, and it looks likely to continue over the longer term.

But the near-term margin consideration is the difficulty of offsetting supply-chain cost increases from trade tariffs against China. Simply put, the pricing environment doesn't seem strong enough to enable Fastenal and MSC to offset cost hikes right now. As you can see below, both companies reported gross margin contraction in the quarter, and both cited rising costs due to tariffs as an issue.

If the difficult price/cost dynamic is replicated at Stanley and Caterpillar (particularly since both companies' guidance implied relative improvement in pricing/cost in the second half), it will be evident when the two -- and others -- report earnings.

What to expect from earnings season

Clearly, some companies will be forced to reduce full-year earnings guidance due to a combination of slowing end demand and rising costs from tariffs. That said, the market has known for some time that the economy is set to slow in 2019, and while some companies' earnings expectations may need to be reduced, it doesn't mean that a recession is around the corner -- earnings remain in growth mode.

All of which suggests a bumpy earnings season, but there will be buying opportunities created by some of the disappointments. So investors need to follow the upcoming earnings reports very closely.

Why Fastenal Stock Rose 14% in May