Bank of America (NYSE:BAC) was the last of the "big four" U.S. banks to report second-quarter earnings, and the numbers look good for the most part. Earnings came in better than expected, profitability metrics were strong, and the bank did a good job of managing expenses.

Having said that, there was one big disappointment in its report that seems to be frightening investors. Here's a rundown of the key points investors should know and what it could mean going forward. 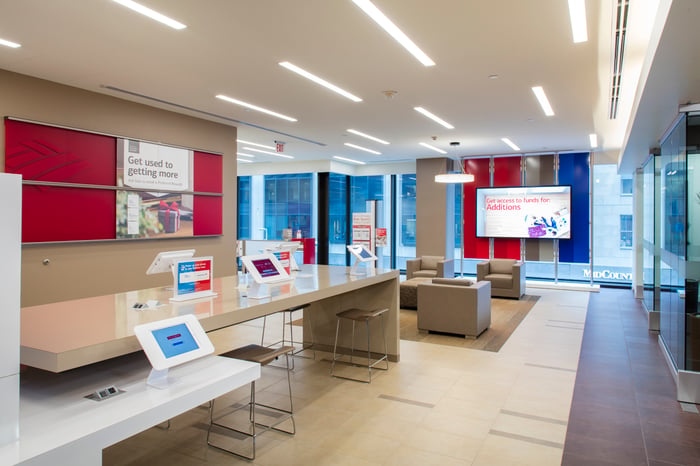 Based on the headline earnings and revenue numbers, you might expect Bank of America's stock to be higher after the earnings announcement. The bank earned $0.74 per share, which beat expectations calling for $0.71. Plus, revenue of $23.2 billion matched projections.

To be clear, it's important to emphasize that shrinking interest margins shouldn't be a complete surprise. Long-term interest rates have been falling in recent months, and this generally translates to narrower interest margins for banks.

Other important highlights from Bank of America's second quarter

Aside from falling interest margins, there was little not to like about Bank of America's earnings report.

Profitability metrics (other than net interest margin) look quite strong. In fact, its return on equity (ROE) of 11.6% and return on assets (ROA) of 1.23% were both big improvements over the 10.8% and 1.17% it managed to generate in the same quarter a year ago.

Furthermore, Bank of America continues to do a great job of managing expenses, as those stayed flat despite 2% year-over-year revenue growth. Its 57% efficiency ratio is among the best of the U.S. banks.

It also posted some of the best consumer banking growth in the industry. Average loans and leases are up 4% over the past year and deposits are up 6%. In contrast, JPMorgan Chase (NYSE:JPM) only managed 2% overall loan growth and its consumer loan portfolio actually declined. Citigroup's (NYSE:C) retail loans grew by 1% and its deposits grew by 2%. And thanks to the Federal Reserve's growth restriction, Wells Fargo's (NYSE:WFC) loans and deposits stayed virtually the same. When it comes to retail banking strength, Bank of America looks like the clear winner of the big four.

The bottom line is that aside from the narrowing profit margin, this was a very solid quarter for Bank of America. The bank continues to improve its efficiency, is growing its retail banking business faster than peers, and surprised the market with better-than-expected earnings.

If interest rates continue to fall, it's possible that we could see more margin contraction ahead, but from a long-term investor's perspective, Bank of America's second-quarter earnings report was a good one.