But while the aerospace and defense conglomerate followed by modestly raising its full-year earnings guidance, shares are down nearly 7% in today's early trading as investors absorb the news. Let's have a deeper look at what's driving Textron as it enters the second half. 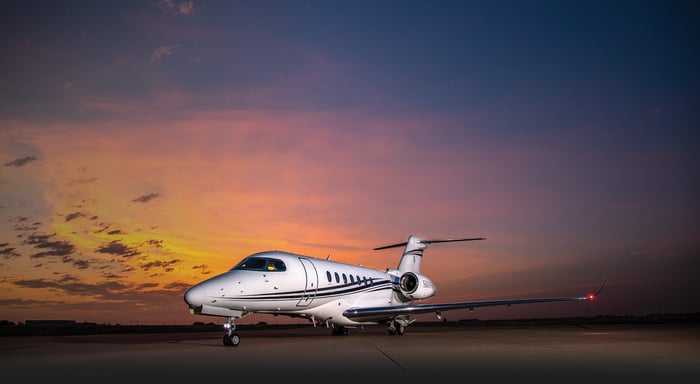 "Operationally, we continued to have solid margin performance across our businesses with improvements in the quarter at Aviation and Industrial, and we remain on track for growth in the second half of the year," stated Textron Chairman and CEO Scott Donnelly.

Given its bottom-line outperformance this quarter, Textron increased its full-year earnings outlook by $0.10 per share for a new range of $3.65 to $3.85. Textron also reaffirmed its target for cash flow from continuing operations of the manufacturing group (before pension contributions) to be in the range of $700 million to $800 million.

"We remain on target for a strong 2019 as we continue our focus on execution and earnings growth through the balance of the year," Donnelly added.

Similar to last quarter, Textron did not revise its full-year revenue outlook, which was initially provided in January and calls for revenue to be roughly flat on a year-over-year basis at $14 billion. But with shares up nearly 20% year to date leading into this report -- and even though Donnelly predicts a return to growth in the second half -- the market is unsurprisingly balking at Textron's light top-line performance relative to expectations.