These three healthcare stocks are worth checking out right now. Here's why.

Healthcare stocks haven't quite outperformed the broader markets this year, per usual, but they have performed admirably given all of the political headwinds facing the sector as a whole. The sector's resilience during this politically turbulent period stems from several favorable tailwinds, such as a bevy of deal-making, the advent of new therapies/diagnostics, and of course, the emergence of the legal medical marijuana space.

With this theme in mind, we asked three of our Motley Fool contributors which healthcare stocks they think are worth buying right now. They picked blue chip biotech Gilead Sciences (GILD -0.28%), cancer diagnostic specialist Guardant Health (GH 3.29%), and Canadian pot cultivator HEXO Corp. (HEXO -0.61%). Here's a brief rundown on why these three healthcare stocks might be worth adding to your portfolio soon. 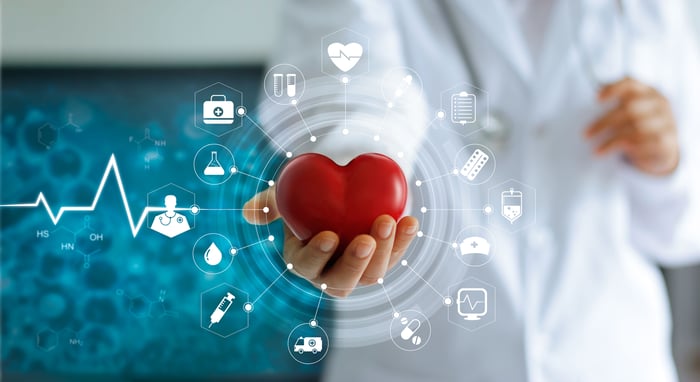 Time to buy this former star

George Budwell (Gilead Sciences): Not too long ago, Gilead Sciences was a bona fide rock star within the biotech investing community, fueled by soaring sales of its single tablet regimen HIV medications and game-changing hepatitis C therapies. Concerns over new competitive threats in the HIV arena and plummeting hep C drug sales, however, changed the market's tune toward this former top growth stock. In fact, Gilead's stock has consistently been one of the biggest laggards within the biotech space -- that is, until only a few months ago.

The biotech's faltering top line, inability to bring any major new medicines -- outside of HIV -- to market in several years, and the rather questionable acquisition of Kite Pharma ultimately led to the departure of former CEO John Milligan. However, this managerial turnover has so far been a net positive for Gilead and its shareholders. Newly minted CEO Daniel O'Day has quickly put his stamp on the ailing biotech by hiring a separate CEO for Kite Pharma to accelerate the unit's turnaround, and he recently cut a huge deal with Belgian biotech Galapagos NV to dramatically boost the company's immunology pipeline.

The market, in turn, has cheered these moves by pushing Gilead's shares up by nearly 7% this year. That's a welcome change from the company's never-ending downward trajectory over the prior three years. O'Day still has a lot of work to do to get the biotech back into tip top shape, but this Galapagos deal is an encouraging sign that he does indeed have a clear vision for how to accomplish this goal. As such, it might be time to finally catch this falling knife.

A leader in the next big thing

Keith Speights (Guardant Health): Everyone's always looking for the next big thing. The reality, of course, is that there are usually multiple developments that could make an enormous impact. In healthcare, liquid biopsy is one of them, and Guardant Health is unquestionably a leader in this next big thing.

Liquid biopsy refers to detecting cancer through blood tests rather than using surgical procedures to obtain a biopsy for analysis. The trick with liquid biopsies is to find trace amounts of DNA that have broken off from tumor cells.

Guardant Health already has three liquid biopsy products in use. Guardant360 enables the screening of patients with advanced-stage cancer to help determine the most effective treatment option. GuardantOmni helps drugmakers screen patients for clinical studies evaluating cancer drugs. The company's newest product, the Lunar DNA assay for detecting early-stage cancer and recurrence of cancer, was released earlier this year for research use only.

All of these liquid biopsy products are still in their very early innings. Guardant Health doesn't have FDA approval for any of them yet, although it expects to submit for approval of Guardant360 in the third quarter of 2019. In the meantime, the company's revenue continues to soar as clinical and biopharmaceutical customers use its products.

Guardant Health believes there's a $39 billion addressable market for its current products in the U.S. alone. The company is also developing new products, including a colorectal DNA screening test. I liked Guardant Health so much that it was my top stock to buy in June. I still think it's a top healthcare stock to buy now.

A big-time health and wellness opportunity

Todd Campbell (HEXO): A big reason marijuana was legalized in Canada and momentum to legalize it is spreading in the United States is its health and wellness benefits. As marijuana and chemical extracts derived from it and hemp, another variation of cannabis, win use in consumer goods, such as edibles, it represents a massive business opportunity for top pot stocks, including HEXO.

HEXO's roots are in serving Canada's legal medical marijuana market, but it's fast becoming a big player in the recreational, adult-use market. Since inception, it's sold over 7.5 million grams of medical and adult-use cannabis in Canada, including 2,700 kilograms (up 9% year over year) last quarter.

That's only the beginning, though. The company produced 9,800 kilograms of marijuana last quarter, up 98% sequentially, and its plans include expansion that will result in annualized production of 150,000 kilograms. That supply target positions HEXO as one of the largest of the second-tier growers in Canada, with potential annual revenue of $400 million as soon as next fiscal year.

HEXO's also one of the few marijuana stocks with a partnership with a top-tier consumer goods company and plans to do business in the U.S., where marijuana remains illegal federally despite over 30 states having pro pot laws in one form or another on the books. Recently, it secured the supply of 260,000 kilograms of hemp through 2020 that can be used to extract the chemical cannabidiol (CBD). Management plans to use hemp-derived CBD products to enter up to eight states in the U.S. as early as next year. The company's also in a joint venture with Molson Coors (TAP 1.74%) -- Truss -- that's developing CBD beverages, which could become available in Canada later in 2019.

Overall, the U.S. and Canada marijuana market is worth in excess of $50 billion annually, and while it remains to be seen what companies become the biggest winners, I think HEXO's chances are good. If I'm right, then buying shares now, when the company's market cap is only $1.3 billion, could pay off.