It's no secret that comScore (NASDAQ:SCOR) has been struggling. Once a celebrated play on digital media, the company was rocked by accounting and leadership issues. Today comScore is in poor shape -- it is unprofitable, slow-growing, and carries a sizable debt load.

comScore's stock price reflects these challenges, but could its low price represent a buying opportunity? 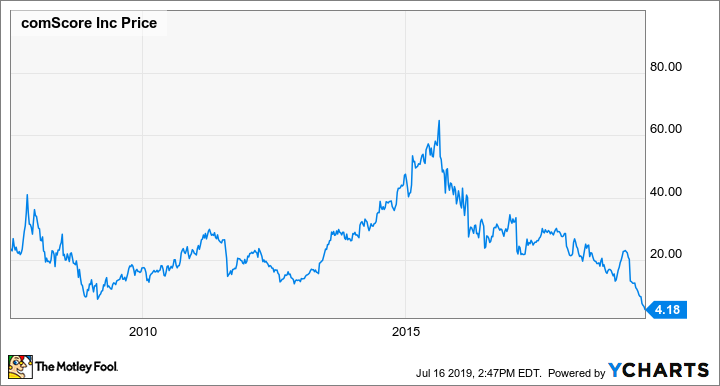 comScore is a technology and data analytics company focused on measuring and reporting consumer media consumption. comScore collects data on which websites, TV shows, and movies people are consuming, and delivers rankings and insights based on that data.

The company packages its data analytics and insights as a subscription and sells its offering to various media and marketing companies, including content owners, distributors, agencies, and advertisers. The business is similar to Nielsen's, but comScore has a stronger reputation for online media analytics.

In theory, comScore is a good business. It sells proprietary data that its customers value for decision making, it is asset-light, and it has recurring revenue through its software as a service (SaaS) offering. However, comScore has been consistently unprofitable, and has had trouble growing its revenue at a rapid rate. In fact, comScore saw its Q1 2019 revenue decline by 3.4% compared to the prior year.

comScore has great promise as a business, but it has not proven its ability to produce strong revenue growth or profitability. The company's inability to execute financially is most likely related to its poor business management.

As can be observed from comScore's stock price chart, things started going south for the company in late 2015.

In 2015 investors and journalists called attention to the company's accounting practices around revenue recognition. comScore had a practice of bartering its product for agreements to receive data or other services from customers. The company would book revenue for these exchanges, despite not receiving cash in many cases. Making matters look worse, 20% of these non-cash transactions originated from employees or organizations affiliated with comScore.

The company's board conducted an accounting investigation in 2016 and took issue with several accounting and management practices, and comScore rectified and recast several years of its financial statements. It also revamped its management team with a new CEO, CFO, and accounting department. The CEO appointed last year recently resigned, however, and the position is currently occupied by an interim CEO. This is not a great sign that proper business oversight has been restored.

comScore's past accounting and leadership issues have rocked investor confidence, and the stock still has not recovered from the highs it saw before the issues were uncovered. 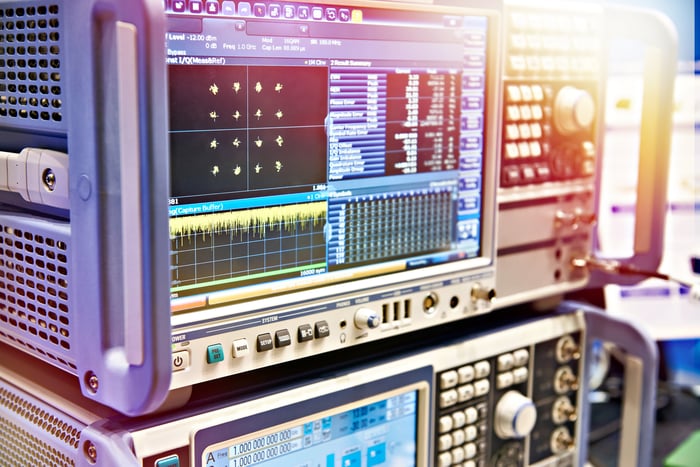 comScore's debt could become a problem

Another cautionary tidbit is that comScore carries a meaningful net debt of $161 million. Most of comScore's debt has been issued in the form of a convertible note due in 2022. Although the debt isn't due in the near term, it is notable because comScore is a cash flow-negative company.

Unless comScore suddenly begins to generate positive cash flow, it will need to raise additional capital to come up with the funds to pay off its debt. This additional financing could come in the form of an equity issuance which would dilute current shareholders, or additional debt at harsh terms in light of the company's ongoing financial issues. Of course, if comScore is unable to repay its debt, it could go bankrupt -- but the company has a couple of years to prepare for the maturity of these notes.

comScore still has a lot of potential as a business. The company's data analytics are more relevant than ever for decision-makers in the media and advertising industries, and its SaaS business model could trade for a high valuation multiple if the company can achieve profitability. However, comScore will need to find a way to restructure its business so that it can be cash flow-positive, invest in growth, and pay off its debt.

Corporate mismanagement has likely been a major cause of the company's problems, but that's fixable. But despite installing new management since the accounting scandal broke, the company's recent financial results have still left much to be desired. And now comScore must find a new permanent CEO after last year's hire quit.

Is comScore's stock a good investment today? It's hard to provide a full-throated recommendation. It is certainly a risky stock that could be worth much more in the future under more capable leadership. For now, the stock may continue its downtrend until the company shows signs of renewed revenue growth or profitability.