Bloomberg recently reported that Apple (NASDAQ:AAPL) is considering spending money to acquire the rights to stream some podcasts exclusively on its Podcasts app. Apple hasn't confirmed the report, but if true, it would be a significant step for the tech giant, which until now has only acted as a facilitator to bring podcasts to its users.

Apple may be considering the idea of exclusive podcasts because its music streaming rival Spotify (NYSE:SPOT) is making inroads into the original podcast programming space. Spotify has already spent $400 million snatching up podcast companies.

Spotify's aggressive moves into the podcast space appear to be forcing Apple to change its strategy. The two companies are currently vying to be the top streaming music service, and Apple likely views podcasts as another battleground.

If Apple does begin shelling out cash for exclusive podcasts, here are three reasons it would be a smart move. 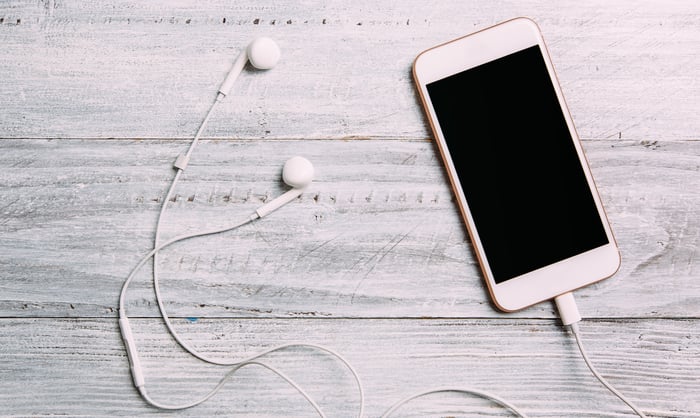 1. Apple has plenty of money to spend

The company recently had $225.4 billion in cash. It has a laundry list of ways it says it's spending that cash -- from share repurchases to buying smaller tech companies -- but all of its current spending plans would still leave the company with lots of money to invest in podcasts without hurting its overall financial stability.

2. It is already getting into the original content game

While buying the exclusive licenses for podcasts is a new idea for Apple, it's not that different from what the company's already doing with original video content. Apple is reportedly spending $2 billion to build up video programming content for its upcoming Apple TV+ service.

While it's still unclear how Apple plans to make money from its podcasts, the company could eventually set up its own advertising platform for them. Podcast ad revenue is expected to grow quickly between now and 2020, and reach $659 million, according to a report by IAB and PwC.

3. It's betting on services, and it can't afford to lose out to Spotify

Apple is in the midst of transitioning from relying on its devices for the majority of its sales to looking to its services segment to do more of the heavy lifting. The company is already in a heated battle in the music space with Spotify, and as its rival continues to invest in podcasts, podcasts could pull more users to Spotify's music streaming service and away from Apple Music.

Apple Music has about 60 million paying subscribers right now, versus Spotify's 100 million premium members, though Apple is estimated to have more subscribers in the U.S. than Spotify. All of which means the competition between Spotify and Apple Music is fierce, and Apple can't afford to let its guard down in any area where its rival is advancing.

Paying for podcasts may seem like a small move for Apple, but if the company ends up spending money to license some exclusive podcasts, it will fit in nicely with its overall strategy in betting on content and services to fuel its business.

Most important of all, it could help Apple stay more competitive with Spotify, which is likely a top priority right now.