Investors haven't shown Coca-Cola (NYSE:KO) stock much love during the latest market rally. The beverage giant's gains through the first half of 2019 trailed the S&P 500 by 10 percentage points, and its shares are also underperforming PepsiCo (NASDAQ:PEP) by about the same margin.

The company has a chance to shift that negative dynamic when it announces second-quarter earnings results before the market opens on Tuesday, July 23. However, investors are expecting to see only modest sales growth in the context of improving profitability. 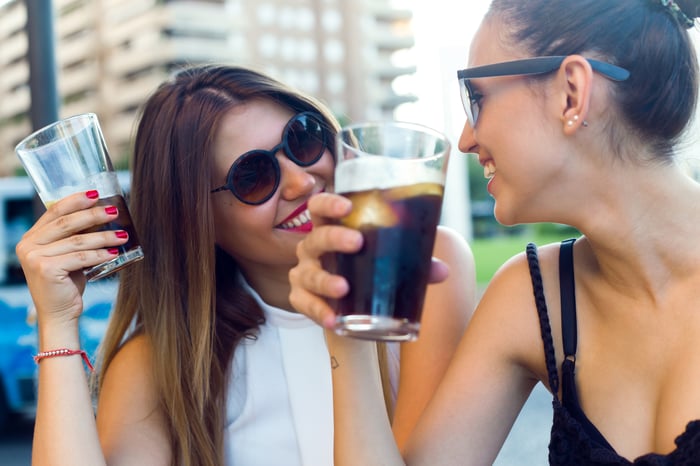 Coke's 5% organic sales increase in the fiscal first quarter constituted a surprisingly strong start to the year, but it's likely that growth rates will slow through the rest of 2019. The beverage giant said part of those Q1 gains came from a disruption in the timing of case orders in Europe, for example, and that bump should reverse itself in the second quarter.

Coca-Cola's broader volumes aren't robust, either, and are actually declining in the key U.S. market as rising demand for water and non-sparkling drinks fails to offset drops in the soda portfolio. The good news is overall sales are increasing thanks to higher prices and the consumer shift toward smaller serving sizes. PepsiCo announced growth driven by the same trend in its recent fiscal second-quarter report.

However, investors would much prefer to see balanced sales gains that include both pricing and volume growth. Continued price-led growth in the report, consistent with what Pepsi reported, would show that the beverage giant is still struggling with soft demand.

Pepsi told investors in early July to brace for a difficult second half ahead for 2019 as sales gains slow and spending rises. Coca-Cola might sound a similar warning on Tuesday.

After all, the prior quarter included a slight drop in profitability, with operating margin dipping to 30.5% of sales from 30.7%. And the beverage titan's latest results are likely to be held back by the same unfavorable cost and currency trends.

The strongest hint about its operating momentum will come from any updates that CEO James Quincey and his team make to their annual outlook. As that prediction stands today, it calls for sales growth to land at 4%, which would mark a slowdown from the 5% increase Coke notched in the first quarter and through the 2018 fiscal year. By comparison, Pepsi affirmed its 4% growth prediction following its second-quarter release, mainly due to strength in its snack food segment.

Coke is heading into the report forecasting flat earnings this year to mark a slightly better result than Pepsi. Hitting these targets would show that the less-diversified beverage giant can still find attractive growth avenues while improving on its already stellar financial efficiency. However, investors likely aren't going to reward the stock with market-beating gains until the company can speed up its drink volume growth, which has hovered around flat for the last few fiscal years.