Please ensure Javascript is enabled for purposes of website accessibility
Free Article Join Over 1 Million Premium Members And Get More In-Depth Stock Guidance and Research
By Beth McKenna - Jul 20, 2019 at 7:32AM

Look for Magic mania to provide an increasing tailwind when the toymaker reports Q2 results on Tuesday, July 23.

The toymaker is going into this report on a solid note. Last quarter, its revenue grew 2.3% -- 5.7% in constant currency -- earnings per share (EPS) flipped to positive from negative, and adjusted EPS more than doubled year over year, to $0.21.

While far from strong, these results were good enough to trounce Wall Street's revenue and earnings expectations and power the stock to a 14% gain. Moreover, they suggest that Hasbro is back in growth mode after being walloped last year -- its net income plunged 44% year over year -- by the Toys R Us bankruptcy and liquidation.

Hasbro shares have returned nearly 37% so far this year through Thursday, July 18, versus the S&P 500's nearly 21% return. Here's what to watch in the toymaker's report. 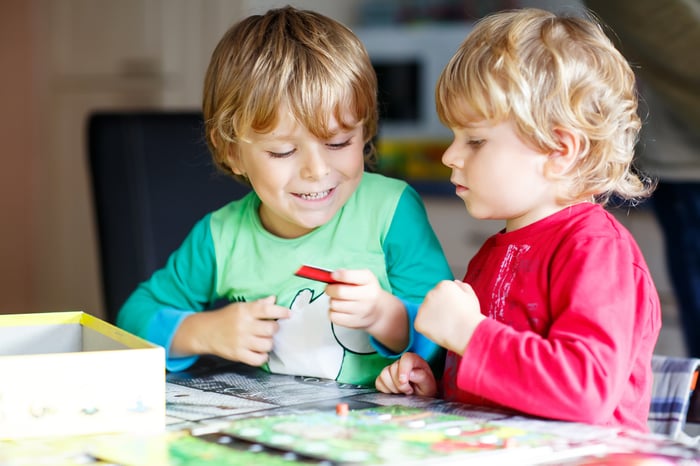 Here are the year-ago period's results and Wall Street's estimates to use as benchmarks:

Hasbro doesn't provide guidance, but CEO Brian Goldner said in last quarter's earnings release that the company is "on track to deliver profitable growth for the full-year 2019." That's due to expected revenue growth coupled with cost savings.

Hasbro can answer an enthusiastic "Yes!" to The Lovin' Spoonful's title question in its '60s hit song, Do You Believe in Magic. Indeed, revenue in franchise brands got a boost from early robust results for the company's new digital and e-sports initiative, Magic: The Gathering Arena. This initiative is a digitalized version of the company's card game that was popular in the '90s.

Along with Arena, growth in the tabletop version of Magic, Monopoly, Play-Doh, and Transformers helped revenue in franchise brands jump 9% year over year to $393.6 million. Gaming revenue grew 2% to $107.6 million, and emerging-brands revenue soared 22% to $59.4 million. Partner brands revenue -- which is driven by movie releases -- declined 14% to $172.0 million.

Investors should focus on comments management shares on the earnings call about Arena, as it looks like it's going to be a big hit.

Last quarter, U.S. and Canada segment revenue grew 1%; international segment revenue slipped 2% (but rose 6% in constant currency); and entertainment, licensing, and digital revenue rose 24%. The good news was that within international, Europe posted revenue growth of 8% in constant currency. Last year, Europe struggled, so this was a nice turnaround. Investors should home in on Europe's results to make sure that they're still on track.

You should be aware that last quarter, Hasbro realigned its segments and "began reporting the digital gaming revenue associated with our Wizards of the Coast 2 brands, including Magic: The Gathering Arena and several other games, in the renamed entertainment, licensing and digital segment," Goldner said on the earnings call. "As a result, for the first quarter of 2018, $10.4 million of digital gaming revenues and $3.2 million of operating profit were reclassified from the U.S. and Canada segment to the entertainment, licensing and digital segment."

The United States' ongoing trade war with China has cooled for now, but it could heat up once again if talks between the two countries break down. So, the additional 25% tariffs that President Trump had threatened to impose on goods imported from China could still be on the table in the future.

Investors should be aware that this is a potentially big headwind, which would likely derail Hasbro's return to profitability, as the bulk of toys sold in the U.S. are made in China.