They're also expressing concern about their investments in big tech, now that the government has expressed some willingness to clamp down on these companies. Read on for more. 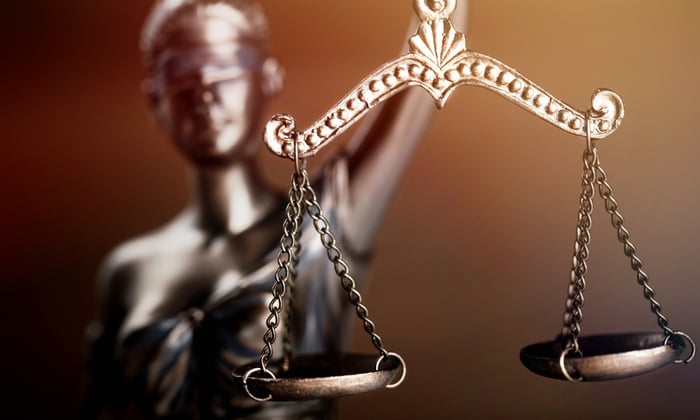 The Department of Justice (DOJ) confirmed after market hours today that it is actively reviewing the business activities of the top names in U.S. technology.

In a press release, the DOJ said its goal in this is to "assess the competitive conditions in the online marketplace in an objective and fair-minded manner and to ensure Americans have access to free markets in which companies compete on the merits to provide services that users want."

It added, "If violations of law are identified, the Department will proceed appropriately to seek redress."

Although the DOJ did not name any companies in particular in its release, speculation is rife that it is specifically interested in Alphabet, Amazon.com, Facebook (NASDAQ:FB), and Apple. For years, all four have faced accusations that they stifle competition and restrict consumer choice.

The DOJ's press release signifies a stronger effort in this regard than had previously been indicated. Meanwhile, a Federal Trade Commission (FTC) push in this direction has already led to a settlement, a roughly $5 billion pact with Facebook over that company's approach to user privacy.

Although shares of the mentioned companies took a hit when the DOJ's press release was made public, they seem to be recovering. For example, Facebook stock is down only 1.5% from its closing price earlier today.

Chipotle is one stock that has seen serious ups, downs, and controversies over the past few years. Just now, though, it's one of the top gainers in after-hours trading following the release of its Q2 of fiscal 2019 results after market close.

Those results were particularly encouraging on the bottom line, on which the company posted a non-GAAP (adjusted) profit of just under $113 million ($3.99 per share). That $113 million was a meaty 41% higher on a year-over-year basis. Revenue, meanwhile, rose by 13% to $1.4 billion on the back of same-restaurant sales that improved by 10%.

The company's revenue was broadly in line with analyst expectations. However, these forecasters were expecting only $3.74 in adjusted earnings per share (EPS).

Chipotle updated its comparable-sales guidance. For the whole of fiscal 2019 it now expects high-single-digit growth in the key metric; previously it anticipated that would land in the mid- to high-single-digit range. The company did not provide revenue or net profit estimates.

Investors like those double-digit improvements in fundamentals, and they like that clear earnings beat. They're currently trading the shares up by 3%.

In what's becoming so commonplace as to be traditional these days, Visa's (NYSE:V) freshly released quarterly earnings topped analyst projections for both revenue and profitability.

The company released its Q3 of fiscal 2019 figures after market close. It posted revenue of $5.8 billion, which was 11% higher than the Q3 2018 result. Adjusted net income also represented an 11% increase, at $3.1 billion or $1.37 per share. On average, analysts tracking the company had expected $5.7 billion and $1.33 per share, respectively.

It's the latest in a lengthening series of beats for the mighty payment card company, which is by far No. 1 in the world in terms of cards outstanding. A growing global economy and a continued move from consumers away from cash and toward plastic and digital payment means are the macro tailwinds pushing that growth. The company also attributed its improvements to recent acquisitions and the extension of lucrative partnerships.

Yet it shaved its guidance for full-year EPS. Visa now believes the number will rise in the mid- to high-teen percentages. That's a step down from the "high end of mid-teens" it had predicted earlier this year.

Likely because of this, Visa's share price is down slightly this evening.